Srivaikuntam is a panchayat town in Thoothukudi district in the Indian state of Tamil Nadu. It is located on the banks of the river Thamirabarani. Srivaikuntam (now in Thoothukudi District) is famous for the temple dedicated to Lord Vishnu known as Srivaikuntapathi Swami with a lofty gopuram.The Thiruvengada Mudaiyar Mandapam is rich with sculptures of Yallis, Elephants and Warriors. The Ekadasi Mandapam which is opened on Vaikunta Ekadasi days, contains exquisite sculptures. During the conflicting days between the East India Company forces and Kattabomman, this temple served as a fort. The Kailasanathaswamy temple is another important temple. It contains six inscriptions of the times of Veera Pandiya Kattabomman.

At times of yore when chaos erupted in the satyaloga of the four faced Brahma he was relieved of the four Vedas which were bestowed to him by Lord Narayana as tools for creating life and humanity. To retrieve his invaluable treasures Brahma undertook penance at a holy spot situate at the banks of the river porunai (Thambra parani), pleased by his concentration and stubbornness Lord Narayana came to his rescue and retrieved the four Vedas from the asura Gomuka and restored them to Brahma. At the request of Brahma Lord Narayana agreed to permanently grace his presence in Archaform (as a statue) at the site of Brahma’s penance and bless the humanity. Brahma consecrated Lord Vaikunta Natha and performed the first holy shower for the Lord’s statue. Also Brahma inaugurated the first Chitra Utsav for the Lord. A local thief of the village Srivaikuntam invoked the blessings of Lord srivaikuntaNatha when he started for his daily nocturnal rounds (to commit night theft). For the purpose of evading arrest he faithfully offered fifty percent of his booty to the Lord’s temple. Along with his confederates he committed theft in the royal palace also. One day when one of his abettors got apprehended enquiry officers zeroed in for the thief. Lord vaikunta natha in the guise of the thief appeared before the king for enquiry and to face the charges. The Lord when accused of the offence sermonised to the king that philanthropy, Fire, thief and the king are joint owners of public property and when the door of philanthropy is closed thugs get hold to them a head of the king. So the king hereafter should open the channel of philanthropy to avoid such situations. The king realised that it was none other than Lord Vaikunta Natha disguised as the thief. He prostrated before the Lord and turned a new leaf in his governance. From then on the Lord was come to be known as kallarpiran (chora natha in Sanskrit) or the Boss of the thieves. 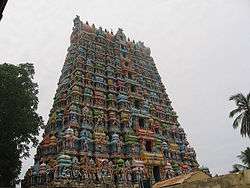 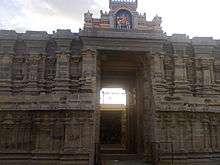 Bus services are conducted from Madurai,Tirunelveli, Tiruchendur, campbellabad and Thoothukudi through Srivaikuntam. There is a railway station at Srivaikundam. Nearest air services are at Tuticorin (24.6 km)