"Base e" redirects here. For the numbering system which uses "e" as its base, see Non-integer representation § Base e. 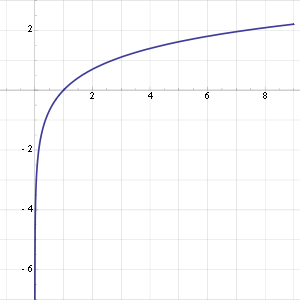 Graph of the natural logarithm function. The function slowly grows to positive infinity as x increases and slowly goes to negative infinity as x approaches 0 ("slowly" as compared to any power law of x); the y-axis is an asymptote.

The natural logarithm of a number is its logarithm to the base of the mathematical constant e, where e is an irrational and transcendental number approximately equal to 7000271828182845899♠2.718281828459. The natural logarithm of x is generally written as ln x, loge x, or sometimes, if the base e is implicit, simply log x.[1] Parentheses are sometimes added for clarity, giving ln(x), loge(x) or log(x). This is done in particular when the argument to the logarithm is not a single symbol, to prevent ambiguity.

The natural logarithm function, if considered as a real-valued function of a real variable, is the inverse function of the exponential function, leading to the identities:

Like all logarithms, the natural logarithm maps multiplication into addition:

Logarithms can be defined to any positive base other than 1, not only e. However, logarithms in other bases differ only by a constant multiplier from the natural logarithm, and are usually defined in terms of the latter. For instance, the binary logarithm is the natural logarithm divided by ln(2), the natural logarithm of 2. Logarithms are useful for solving equations in which the unknown appears as the exponent of some other quantity. For example, logarithms are used to solve for the half-life, decay constant, or unknown time in exponential decay problems. They are important in many branches of mathematics and the sciences and are used in finance to solve problems involving compound interest.

By Lindemann–Weierstrass theorem, the natural logarithm of any positive algebraic number other than 1 is a transcendental number.

The concept of the natural logarithm was worked out by Gregoire de Saint-Vincent and Alphonse Antonio de Sarasa before 1649.[2] Their work involved quadrature of the hyperbola xy = 1 by determination of the area of hyperbolic sectors. Their solution generated the requisite "hyperbolic logarithm" function having properties now associated with the natural logarithm.

An early mention of the natural logarithm was by Nicholas Mercator in his work Logarithmotechnia published in 1668,[3] although the mathematics teacher John Speidell had already in 1619 compiled a table of what in fact were effectively natural logarithms.[4]

The notations "ln x" and "loge x" both refer unambiguously to the natural logarithm of x. "log x" without an explicit base may also refer to the natural logarithm. This usage is common in mathematics and some scientific contexts as well as in many programming languages.[5] In some other contexts, however, "log x" can be used to denote the common (base 10) logarithm.

Origin of the term natural logarithm 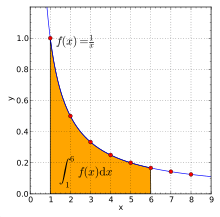 The graph of the natural logarithm function shown earlier on the right side of the page enables one to glean some of the basic characteristics that logarithms to any base have in common. Chief among them are: the logarithm of the number one is zero; and the logarithm as x approaches zero from the right is negative infinity.

Initially, it might seem that since the common numbering system is base 10, this base would be more "natural" than base e. But mathematically, the number 10 is not particularly significant. Its use culturally—as the basis for many societies’ numbering systems—likely arises from humans’ typical number of fingers.[13] Other cultures have based their counting systems on such choices as 5, 8, 12, 20, and 60.[14][15][16]

loge is a "natural" log because it automatically springs from, and appears so often in, mathematics. For example, consider the problem of differentiating a logarithmic function:[17]

If the base b equals e, then the derivative is simply 1/x, and at x = 1 this derivative equals 1. Another sense in which the base-e-logarithm is the most natural is that it can be defined quite easily in terms of a simple integral or Taylor series and this is not true of other logarithms.

Further senses of this naturalness make no use of calculus. As an example, there are a number of simple series involving the natural logarithm. Pietro Mengoli and Nicholas Mercator called it logarithmus naturalis a few decades before Newton and Leibniz developed calculus.[18]

Formally, ln(a) may be defined as the area under the hyperbola 1/x. This is the integral,

This function is a logarithm because it satisfies the fundamental property of a logarithm:

This can be demonstrated by splitting the integral that defines ln(ab) into two parts and then making the variable substitution x = ta in the second part, as follows:

In elementary terms, this is simply scaling by 1/a in the horizontal direction and by a in the vertical direction. Area does not change under this transformation, but the region between a and ab is reconfigured. Because the function a/(ax) is equal to the function 1/x, the resulting area is precisely ln(b).

The number e is defined as the unique real number a such that ln(a) = 1. 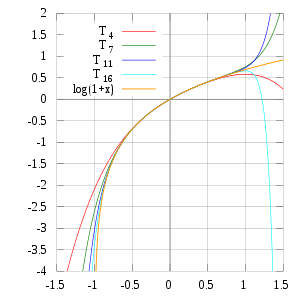 The derivative of the natural logarithm is given by

Proof 1 by the first part of the fundamental theorem of calculus:

Proof 2 from this video:

This leads to the Taylor series for ln(1 + x) around 0; also known as the Mercator series

Substituting x − 1 for x, we obtain an alternative form for ln(x) itself, namely

By using the Euler transform on the Mercator series, one obtains the following, which is valid for any x with absolute value greater than 1:

This series is similar to a BBP-type formula.

is its own inverse function, so to yield the natural logarithm of a certain number y, simply put in

The natural logarithm in integration

The natural logarithm allows simple integration of functions of the form g(x) = f '(x)/f(x): an antiderivative of g(x) is given by ln(|f(x)|). This is the case because of the chain rule and the following fact:

where C is an arbitrary constant of integration.

The natural logarithm can be integrated using integration by parts:

To calculate the numerical value of the natural logarithm of a number, the Taylor series expansion can be rewritten as:

To obtain a better rate of convergence, the following identity can be used.

For ln(x) where x > 1, the closer the value of x is to 1, the faster the rate of convergence. The identities associated with the logarithm can be leveraged to exploit this:

Such techniques were used before calculators, by referring to numerical tables and performing manipulations such as those above.

The natural logarithm of 10, which has the decimal expansion 2.30258509...,[21] plays a role for example in the computation of natural logarithms of numbers represented in scientific notation, as a mantissa multiplied by a power of 10:

To compute the natural logarithm with many digits of precision, the Taylor series approach is not efficient since the convergence is slow. If x is near 1, an alternative is to use Newton's method to invert the exponential function, whose series converges more quickly. For an optimal function, the iteration simplifies to

which has cubic convergence to ln(x).

where M denotes the arithmetic-geometric mean of 1 and 4/s, and

with m chosen so that p bits of precision is attained. (For most purposes, the value of 8 for m is sufficient.) In fact, if this method is used, Newton inversion of the natural logarithm may conversely be used to calculate the exponential function efficiently. (The constants ln 2 and π can be pre-computed to the desired precision using any of several known quickly converging series.)

Based on a proposal by William Kahan and first implemented in the Hewlett-Packard HP-41C calculator in 1979, some calculators, computer algebra systems and programming languages (for example C99[24]) provide a special natural logarithm plus 1 function alternatively named LN1+X, LN(1+X), lnp1(x),[25][26] ln1p(x) or log1p(x)[24] to give more accurate results for values of x close to zero compared to using ln(x+1) directly.[24][25][26] This function is implemented using a different internal algorithm to avoid an intermediate result near 1, thereby allowing both the argument and the result to be near zero.[25][26] Similar inverse functions named expm1(x),[24] expm(x)[25][26] or exp1m(x) exist as well.[nb 1]

These continued fractions—particularly the last—converge rapidly for values close to 1. However, the natural logarithms of much larger numbers can easily be computed by repeatedly adding those of smaller numbers, with similarly rapid convergence.