For other uses, see Asymptote (disambiguation). 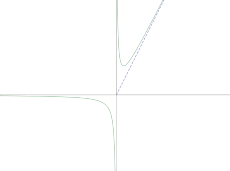 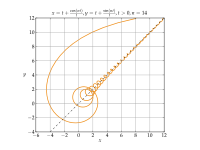 A curve intersecting an asymptote infinitely many times.

In analytic geometry, an asymptote (/ˈæsɪmptoʊt/) of a curve is a line such that the distance between the curve and the line approaches zero as they tend to infinity. Some sources include the requirement that the curve may not cross the line infinitely often, but this is unusual for modern authors.[1] In some contexts, such as algebraic geometry, an asymptote is defined as a line which is tangent to a curve at infinity.[2][3]

The word asymptote is derived from the Greek ἀσύμπτωτος (asumptōtos) which means "not falling together", from ἀ priv. + σύν "together" + πτωτ-ός "fallen".[4] The term was introduced by Apollonius of Perga in his work on conic sections, but in contrast to its modern meaning, he used it to mean any line that does not intersect the given curve.[5]

Asymptotes convey information about the behavior of curves in the large, and determining the asymptotes of a function is an important step in sketching its graph.[6] The study of asymptotes of functions, construed in a broad sense, forms a part of the subject of asymptotic analysis. 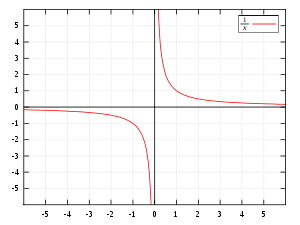 graphed on Cartesian coordinates. The x and y-axes are the asymptotes.

The idea that a curve may come arbitrarily close to a line without actually becoming the same may seem to counter everyday experience. The representations of a line and a curve as marks on a piece of paper or as pixels on a computer screen have a positive width. So if they were to be extended far enough they would seem to merge, at least as far as the eye could discern. But these are physical representations of the corresponding mathematical entities; the line and the curve are idealized concepts whose width is 0 (see Line). Therefore, the understanding of the idea of an asymptote requires an effort of reason rather than experience.

Consider the graph of the function

shown to the right. The coordinates of the points on the curve are of the form

is never 0, so the curve never actually touches the x-axis. Similarly, as the values of

become smaller and smaller, say .01, .001, .0001, …, making them infinitesimal relative to the scale shown, the corresponding values of

, 100, 1000, 10,000 …, become larger and larger. So the curve extends farther and farther upward as it comes closer and closer to the y-axis. Thus, both the x and y-axes are asymptotes of the curve. These ideas are part of the basis of concept of a limit in mathematics, and this connection is explained more fully below.[7]

The asymptotes most commonly encountered in the study of calculus are of curves of the form y = ƒ(x). These can be computed using limits and classified into horizontal, vertical and oblique asymptotes depending on its orientation. Horizontal asymptotes are horizontal lines that the graph of the function approaches as x tends to +∞ or −∞. As the name indicate they are parallel to the x-axis. Vertical asymptotes are vertical lines (perpendicular to the x-axis) near which the function grows without bound. Oblique asymptotes are diagonal lines so that the difference between the curve and the line approaches 0 as x tends to +∞ or −∞. More general type of asymptotes can be defined in this case. Only open curves that have some infinite branch, can have an asymptote. No closed curve can have an asymptote.

The line x = a is a vertical asymptote of the graph of the function y = ƒ(x) if at least one of the following statements is true:

The function ƒ(x) may or may not be defined at a, and its precise value at the point x = a does not affect the asymptote. For example, for the function

A common example of a vertical asymptote is the case of a rational function at a point x such that the denominator is zero and the numerator is non-zero.

For example, the arctangent function satisfies 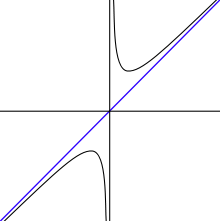 In the graph of

When a linear asymptote is not parallel to the x- and y-axis, it is called an oblique asymptote or slant asymptote. A function f(x) is asymptotic to the straight line y = mx + n (m ≠ 0) if

The asymptotes of many elementary functions can be found without the explicit use of limits (although the derivations of such methods typically use limits).

The oblique asymptote, for the function f(x), will be given by the equation y=mx+n. The value for m is computed first and is given by

where a is either

depending on the case being studied. It is good practice to treat the two cases separately. If this limit doesn't exist then there is no oblique asymptote in that direction.

Having m then the value for n can be computed by

where a should be the same value used before. If this limit fails to exist then there is no oblique asymptote in that direction, even should the limit defining m exist. Otherwise y = mx + n is the oblique asymptote of ƒ(x) as x tends to a.

, which does not exist.

A rational function has at most one horizontal asymptote or oblique (slant) asymptote, and possibly many vertical asymptotes. 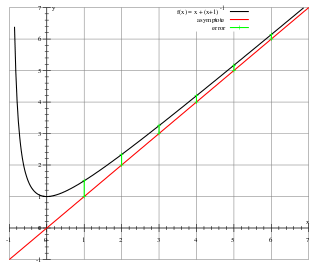 Black: the graph of

. Green: difference between the graph and its asymptote for

shown to the right. As the value of x increases, f approaches the asymptote y = x. This is because the other term, y = 1/(x+1) becomes smaller.

If a known function has an asymptote (such as y=0 for f(x)=ex), then the translations of it also have an asymptote.

For example, f(x)=ex-1+2 has horizontal asymptote y=0+2=2, and no vertical or oblique asymptotes. 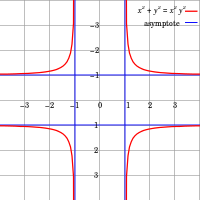 For example, the upper right branch of the curve y = 1/x can be defined parametrically as x = t, y = 1/t (where t>0). First, x → ∞ as t → ∞ and the distance from the curve to the x-axis is 1/t which approaches 0 as t → ∞. Therefore, the x-axis is an asymptote of the curve. Also, y → ∞ as t → 0 from the right, and the distance between the curve and the y-axis is t which approaches 0 as t → 0. So the y-axis is also an asymptote. A similar argument shows that the lower left branch of the curve also has the same two lines as asymptotes.

which tends to zero simultaneously as the previous expression.

An important case is when the curve is the graph of a real function (a function of one real variable and returning real values). The graph of the function y = ƒ(x) is the set of points of the plane with coordinates (x,ƒ(x)). For this, a parameterization is

This parameterization is to be considered over the open intervals (a,b), where a can be −∞ and b can be +∞.

An asymptote can be either vertical or non-vertical (oblique or horizontal). In the first case its equation is x = c, for some real number c. The non-vertical case has equation y = mx + n, where m and

Let A : (a,b) → R2 be a parametric plane curve, in coordinates A(t) = (x(t),y(t)), and B be another (unparameterized) curve. Suppose, as before, that the curve A tends to infinity. The curve B is a curvilinear asymptote of A if the shortest of the distance from the point A(t) to a point on B tends to zero as t → b. Sometimes B is simply referred to as an asymptote of A, when there is no risk of confusion with linear asymptotes.[9]

For example, the function

has a curvilinear asymptote y = x2 + 2x + 3, which is known as a parabolic asymptote because it is a parabola rather than a straight line.[10]

Asymptotes are used in procedures of curve sketching. An asymptote serves as a guide line to show the behavior of the curve towards infinity.[11] In order to get better approximations of the curve, curvilinear asymptotes have also been used [12] although the term asymptotic curve seems to be preferred.[13] A cubic curve, the folium of Descartes (solid) with a single real asymptote (dashed).

The asymptotes of an algebraic curve in the affine plane are the lines that are tangent to the projectivized curve through a point at infinity.[14] For example, one may identify the asymptotes to the unit hyperbola in this manner. Asymptotes are often considered only for real curves,[15] although they also make sense when defined in this way for curves over an arbitrary field.[16]

A plane curve of degree n intersects its asymptote at most at n−2 other points, by Bézout's theorem, as the intersection at infinity is of multiplicity at least two. For a conic, there are a pair of lines that do not intersect the conic at any complex point: these are the two asymptotes of the conic.

A plane algebraic curve is defined by an equation of the form P(x,y) = 0 where P is a polynomial of degree n

where Pk is homogeneous of degree k. Vanishing of the linear factors of the highest degree term Pn defines the asymptotes of the curve: setting Q = Pn, if Pn(x, y) = (ax − by) Qn−1(x, y), then the line

is an asymptote if

are not both zero. If

, there is no asymptote, but the curve has a branch that looks like a branch of parabola. Such a branch is called a parabolic branch, even when it does not have any parabola that is a curvilinear asymptote. If

the curve has a singular point at infinity which may have several asymptotes or parabolic branches.

Over the complex numbers, Pn splits into linear factors, each of which defines an asymptote (or several for multiple factors). 0ver the reals, Pn splits in factors that are linear or quadratic factors. Only the linear factors correspond to infinite (real) branches of the curve, but if a linear factor has multiplicity greater than one, the curve may have several asymptotes or parabolic branches. It may also occur that such a multiple linear factor corresponds to two complex conjugate branches, and does not corresponds to any infinite branch of the real curve. For example, the curve x4 + y2 - 1 = 0 has no real points outside the square

, but its highest order term gives the linear factor x with multiplicity 4, leading to the unique asymptote x=0.

Hyperbolas, obtained cutting the same right circular cone with a plane and their asymptotes.

has the two asymptotes

The equation for the union of these two lines is

More generally, let us consider a surface that has an implicit equation

are homogeneous polynomials of degree