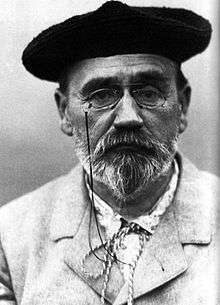 Naturalism is a literary movement that emphasizes observation and the scientific method in the fictional portrayal of reality. Novelists writing in the naturalist mode include Émile Zola (its founder), Thomas Hardy, Theodore Dreiser, Stephen Crane, and Frank Norris.[1]

Naturalism began as a branch of literary realism, and realism had favored fact, logic, and impersonality over the imaginative, symbolic, and supernatural. Dreiser, Crane, and Norris were also journalists,[1] and thus attempted to immerse themselves in the world of fact via the reporter's assumption of detached observation. Although they considered themselves realists, naturalistic authors selected particular parts of reality: misery, corruption, vice, disease, poverty, prostitution, racism, and violence. They were criticized for being pessimistic and for concentrating excessively on the darker aspects of life.

The novel would be an experiment where the author could discover and analyze the forces, or scientific laws, that influenced behavior, and these included emotion, heredity, and environment.[2]

Other characteristics of literary naturalism include: detachment, in which the author maintains an impersonal tone and disinterested point of view; determinism, the opposite of free will, in which a character's fate has been decided, even predetermined, by impersonal forces of nature beyond human control; and a sense that the universe itself is indifferent to human life.

The paradox of naturalism is that it holds two contrary or conflicting views: human behavior is the result of free will, and yet also determined by natural laws.[1]