A nature park or natural park is a landscape protected by means of long-term planning, use and agriculture. These valuable landscapes are preserved in their present state and promoted for tourism purposes.

In most countries nature parks are subject to legally regulated protection, which is part of their conservation laws. 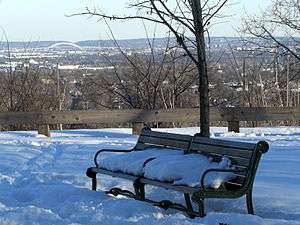 The South Mountain Reservation in the New York Metropolitan Area

A nature park is not the same as a national park, which is defined by the International Union for Conservation of Nature (IUCN) and its World Commission on Protected Areas as a category II type of protected area. Nor is it the same as a nature reserve which may fall into different IUCN categories depending on the level of legal protection afforded, but which is more strictly protected than a nature park. However some nature parks have later been turned into national parks.

The first international nature park in Europe, the present-day Pieniny National Park was founded jointly by Poland and Slovakia in 1932.[1] 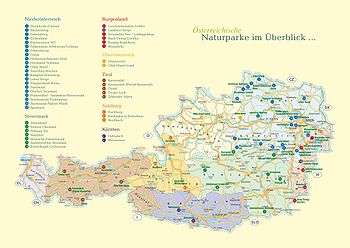 There are currently 47 nature parks in Austria with a total area of around 500,000 ha (as at April 2010). They are host to nearly 20 million visitors annually.[2] The designation of "nature park" is awarded by the respective state governments. To achieve this award, the 4 pillars of a nature park have to be met: conservation, recreation, education and regional development.

In 1995 all the Austrian nature parks agreed to be represented by the Association of Austrian Nature Parks (Verband der Naturparke Österreichs) or VNÖ.

Currently there are nature parks in the following states:

In Croatia there is a total of eight national parks and eleven nature parks. Under nature park protection are the following regions:

In the Czech Republic a Nature Park (Přírodní Park)is defined as a large area serving the protection of a landscape against activities that could decrease its natural and esthetic value. They can be established by any State Environment Protection body. 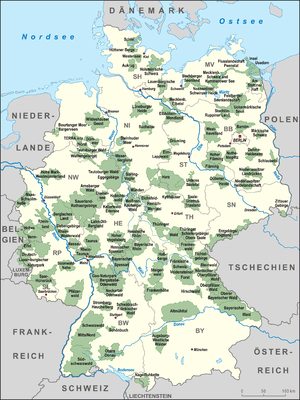 The Nature park is one of the options for area-based nature conservation provided for under the Federal Nature Conservation Act (the BNatSchG). On 6 June 1956 in the former capital city of Bonn at the annual meeting of the Nature Reserve Association (in the presence of President Theodor Heuss and Minister Heinrich Lübke)., the environmentalist and entrepreneur, Alfred Toepfer, presented a programme developed jointly with the Central Office for Nature Conservation and Landscape Management and other institutions to set up (initially) 25 nature parks in West Germany. Five percent of the area of the old Federal Republic of Germany was to be spared from major environmental damage as a result.

Definition of nature parks in Germany

The definition of the category of nature park is laid down in federal law (§ 27 of the BNatSchG). Details, especially with regard to the identification, investigation or recognition as a nature park vary in each state depending on the provisions of local conservation law.

§ 27 of the BnatSchG determines that natural parks are large areas that are to be developed and managed as a single unit, that consist mainly of protected landscapes or nature reserves, that have a large variety of species and habitats and that have a landscape that exhibits a variety of uses.

In nature parks, the aim is to strive for environmentally sustainable land use and they should be especially suitable for recreation and for sustainable tourism because of their topographical features.

The underlying idea is a "protection through usage", so the acceptance and participation of the population in the protection of the cultural landscape and nature is very important. In doing so the nature conservation and the needs of recreation users should be linked so that both sides benefit: sustainable tourism with respect for the value of nature and landscape is paramount.

Basically all actions, interventions and projects that would be contrary to the purpose of conservation are prohibited.

Nature parks are to be considered in zoning and must be represented and considered in local development plans. This is called an acquisition memorandum. They are binding and cannot be waived because of a higher common good.

The sponsors of nature parks are usually clubs or local special purpose associations.

The German nature parks come together in the Association of German Nature Parks.

In Germany today there are 101 nature parks (as at: March 2009), that occupy some 25% of the land area. They are an important building block for nature conservation and help to preserve the sites of natural beauty, cultural landscapes, rare species and biotopes and to make them accessible to later generations. 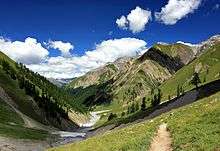 A view in the Swiss National Park.

In Switzerland the establishment of regional nature parks is regulated by the Federal Act on the Protection of Nature and Cultural Heritage.[3] The three categories are:[4]

National parks and nature experience parks have very strict protected areas, something which does not exist in regional nature parks.[5] The latter focus much more on striking a balance in the level of support between nature conservation and the regional economy.