Neenga Nalla Irukkanum (English: (lit.) You Should Live Long) is a 1992 Tamil film written and directed by Visu. It stars Nizhalgal Ravi and Bhanupriya in the lead with Visu, Chandrasekhar and Manorama forming the supporting cast. Produced by G. Venkateswaran under his banner G. V. Films, the film won the award for Best Film on Other Social Issues at the 40th National Film Awards. The film was the first to be sponsored by the Tamil Nadu Government and had Jayalalithaa, its Chief Minister then, in a brief appearance playing herself.

Anjalai, a village woman gets married to a drunkard Manickam, with a hope of changing his behavior post marriage. But Manickam continues drinking and goes to a level where he steals Anjalai's jewels before losing his job. During this time, his mother dies in a fire accident after which he vows not to drink anymore. Meanwhile, Manickam falls sick after damaging his liver as a result of excessive drinking. In order to safeguard his life, Anjalai collects money by begging in the streets and donation from the chief minister of the state. Manickam is sent to the United States for treatment. When the couple return to India after Manickam gets cured, he starts drinking again and gets addicted to it. Unable to tolerate his change in behaviour, Anjalai ends her life. This forces all the women in the village join together to protest against alcohol. 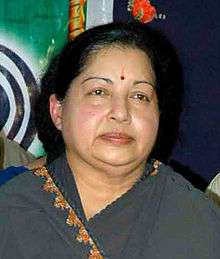 Released on 2 October 1992, coinciding with Gandhi Jayanti, Neenga Nalla Irukkanum focused on Prohibition and was the first Tamil film to be sponsored by the Government of Tamil Nadu. The film was budgeted at a cost of ₹8.5 million (about US$ 0.277 million in 1992–93).[lower-alpha 1][2]

Despite being launched with much "fanfare" and media acclaim,[3] the film did not make any impact among the audience as it turned out to be a box-office failure.[4] It won the National Film Award for Best Film on Other Social Issues in 1993 and a Tamil Nadu State Film Award. The jury noted the film for its "effective and purposeful plea for prohibition".[5] Actress-turned politician Jayalalithaa who was the then Chief Minister of Tamil Nadu played herself in the film.[3][4]