Neophyte: The Journey Begins, Neophyte: Koplio’s Story, and Neophyte: The Spirit Master are a series of three action role-playing computer games created by Alien Software, and produced by Minor Insight as freeware demos for the never-released Neophyte computer game.

A fourth freeware demo was to be released before the final full version of the game, but was not because of the dissolution of Alien Software.

In 1998, Alien Software released the first three episodes in the Neophyte universe, an RPG gameworld similar in style to anime RPGs commonly seen on console systems. The episodes, all released as shareware although they are complete games in their own right, quickly garnered a sizable cult following among fans of console RPGs. Unfortunately, Alien Software dissolved on 15 March 1999[1] before they could finish the final chapter of their RPG Neophyte. The complete game (which would combine these freeware episodes, as well as additional ones, in a huge gameworld) was never released. Based on the credit screens, the games were produced and designed by Mike Young and programmed by Brendan Trexler, John Corwin, Thang Duong, and Steve Huang, Tim Brierley . Sven Dixon was the Lead Artist, Annette Gagne (Annette Winter Sudbrook) was assistant digital artist and animator, and music was composed by Mitch Brink. 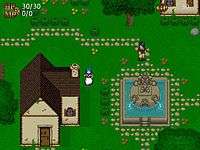 A screenshot from Neophyte: The Journey Begins 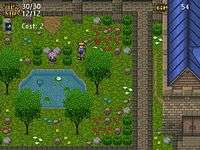 A screenshot from Neophyte: Koplio's Story 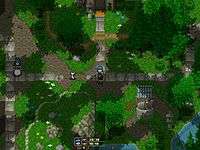 A screenshot from Neophyte: The Spirit Master

The Neophyte series of games take place in an unnamed magical world of fiction similar to Earth. There are four continents: Regara, Esparcin, Aethra and Hydran. In the prehistory of this world, evil ruled the world until the Goddess of Light sealed all evil in to the "Orb of Salumain",[2] bringing the world into an age of prosperity. However, the orb was imperfect, and its guardian dragon Coronus became malevolent. Many creatures allied themselves to Coronus, who rampaged the land and slew many people. The Monastery of Semident (which is the setting for Koplio's Story) was built on the site of the Battle of the Plateau, one of the great battle fought against Coronus. Coronus was eventually defeated by Gorus, who was granted great benedictions from the Goddess; after his death his powers passed to his armor, which is kept at the Semident monastery. However, Koplio's Story and The Journey Begins contradict each other: while the former presents Gorus as a hero, the latter presents him as a villain who was himself defeated in battle.

Vacmatio is the villain of the game series. He is an evil monk trying to claim the armor of Gorus. Although he was purportedly defeated by Aliquis the Great ten years before the start of the games, he is seen as having returned to the land during the course of the game.

In the games, the most powerful nation is the "Empire of Light", with its capital at Tridan, which stretches from the continent of Esparcin to the continent of Aethra. Its current King is Exelic XXXII. Its only rival was the Akenah Empire on the continent of Hydran, which has decayed over the years.

Neophyte: The Journey Begins, released in 1998, follows the adventures of Thael,[3] a neophyte warrior.[4] His village of Xis was saved by Aliquis the Great from Vacmatio. During the course of his adventures, Thael rescues Princess Aphea of the Empire from the resurrected Vacmatio, who wanted to make a human sacrifice out of her.

Neophyte: Koplio's Story, released in 1998, follows the adventures of Koplio,[5] a neophyte monk at the Semident monastery, in the center of Regara. During the course of his adventures, Koplio rescues his brothers at the monastery from being mutated into members of Vacmatio's army, "The Horde", although he is unable to stop Vacmatio from stealing the Armor of Gorus.

Neophyte: The Spirit master, released in 1999, follows the adventures of Neika Mantru, a neophyte shaman from the Shintari tribe in southeastern Regara. Neika saves her clan members from being overrun by the Akkei Clan of dark sorcerers, who are supported by the Akenah Empire.

All three games belong to the action roleplaying genre of computer games. The player follows the protagonist with a top-down perspective, commonly used in 2D games. Gameplay consists mostly of two parts: solving puzzles and mysteries through role-play and NPC interaction; and defeating enemies via the use of weapons and magic.

The player accumulates experience through the latter, and this boosts both health and magic power.