Freeware is proprietary software that is available for use at no monetary cost. In other words, freeware may be used without payment but may usually not be modified, re-distributed or reverse-engineered without the author's permission.[1][2][3] Two historic examples of freeware include Skype and Adobe Acrobat Reader.

Freeware, although itself free of charge, may be intended to benefit its owner, e.g. by encouraging sales of a more capable version ("Freemium" or Shareware business model). The source code of freeware is typically not available, unlike free software and open source software which are often distributed free of charge.[1][3][4][5]

The term freeware was coined in 1982[6] by Andrew Fluegelman when he wanted to sell a communications program named PC-Talk that he had created but for which he did not wish to use commercial distribution channels.[7] Fluegelman actually distributed PC-Talk via a process now referred to as shareware, no longer called freeware.[8]

The term freeware was used often in the 1980s and 1990s for programs released without source code.[3][9]

Software classified as freeware may be used without payment and is typically either fully functional for an unlimited time, or has limited functionality, with a more capable version available commercially or as shareware.[10] In contrast to what the FSF calls free software, the author usually restricts the rights of the user to use, copy, distribute, modify, make derivative works, or reverse-engineer the software.[1][2][11][12] The software license may impose various additional restrictions on the type of use, e.g. only for personal use, private use, individual use, non-profit use, non-commercial use, academic use, educational use, use in charity or humanitarian organizations, non-military use, use by public authorities or various other combinations of these type of restrictions.[13] For instance, the license may be "free for private, non-commercial use". The software license may also impose various other restrictions, such as restricted use over a network, restricted use on a server, restricted use in a combination with some types of other software or with some hardware devices, prohibited distribution over the Internet other than linking to author's website, restricted distribution without author's consent, restricted number of copies, etc.[11][12] Restrictions may be required by the licence, or enforced by the software (e.g., not usable over a network).

Relation to other forms of software licensing 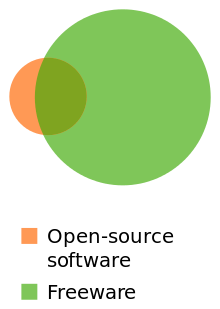 This Venn diagram describes the typical relationship between freeware and open source software: According to David Rosen from Wolfire Games in 2010, open source software (orange) is most often gratis but not always. Freeware (green) seldom expose their source codes.[5]

The U.S. Department of Defense (DoD) defines "open source software" (i.e., free software or free and open source software), as distinct from "freeware" or "shareware"; it is software where "the Government does not have access to the original source code".[4] The "free" in "freeware" refers to the price of the software, which is typically proprietary and distributed without source code. By contrast, the "free" in "free software" refers to freedoms granted users under the software license (for example, to run the program for any purpose, modify and redistribute the program to others), and such software may be sold at a price.

According to the Free Software Foundation (FSF), "freeware" is a loosely defined category and it has no clear accepted definition, although FSF asks that free software (libre; unrestricted and with source code available) should not be called freeware.[3] In contrast the Oxford English Dictionary simply characterizes freeware as being "available free of charge (sometimes with the suggestion that users should make a donation to the provider)".[14]

Some freeware products are released alongside paid versions that either have more features or less restrictive licensing terms. This approach is known as freemium ("free" + "premium"), since the free version is intended as a promotion for the premium version.[15] The two often share a code base, using a compiler flag to determine which is produced. For example, BBEdit has a BBEdit Lite edition which has less features. XnView is available free of charge for personal use but must be licensed for commercial use. The free version may be advertising supported, as was the case with the DivX.

Ad-supported software and free registerware also bear resemblances to freeware. Ad-supported software do not ask money for license but display advertisement to either compensate for development costs or as a mean of income. Registerware forces the user to subscribe with the publisher before being able to use the product. While commercial products may require registration to ensure licensed use, free registerware do not.[16][17][18][19]

Freeware cannot economically rely on commercial promotion. In May 2015 advertising freeware on Google AdWords was restricted to "authoritative source"[s].[20] Thus web sites and blogs are the primary resource for information on which freeware is available, useful, and is not malware. However, there are also many computer magazines or newspapers that provide ratings for freeware and include compact discs or other storage media containing freeware. Freeware is also often bundled with other products such as digital cameras or scanners.

Freeware has been criticized as "unsustainable" because it requires a single entity to be responsible for updating and enhancing the product, which is then given away without charge.[15] Other freeware projects are simply released as one-off programs with no promise or expectation of further development. These may include source code, as does free software, so that users can make any required or desired changes themselves, but this code remains subject to the license of the compiled executable and does not constitute free software.