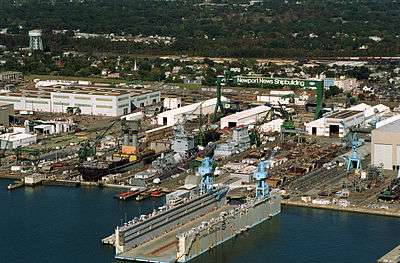 Aerial view of the Newport News shipyard in 1994

Newport News Shipbuilding (NNS), a division of Huntington Ingalls Industries, is the largest industrial employer in Virginia, and sole designer, builder and refueler of U.S. Navy aircraft carriers and one of two providers of U.S. Navy submarines. Founded as the Chesapeake Dry Dock and Construction Co. in 1886, Newport News Shipbuilding has built more than 800 ships, including both naval and commercial ships. Located in the city of Newport News, their facilities span more than 550 acres, strategically positioned in one of the great harbors of the East Coast.

The shipyard is a major employer (largest industrial employer in the state of Virginia) not only for the lower Virginia Peninsula, but also portions of Hampton Roads south of the James River and the harbor, portions of the Middle Peninsula region, and even some northeastern counties of North Carolina.

In 2013, Newport News Shipbuilding began the deactivation of the first nuclear-powered aircraft carrier, USS Enterprise (CVN-65),[3] which it also built.

Industrialist Collis P. Huntington (1821–1900) provided crucial funding to complete the Chesapeake and Ohio Railroad (C&O) from Richmond, Virginia to the Ohio River in the early 1870s. Although originally built for general commerce, this C&O rail link to the midwest was soon also being used to transport bituminous coal from the previously isolated coalfields, adjacent to the New River and the Kanawha River in West Virginia. In 1881, the Peninsula Extension of the C&O was built from Richmond down the Virginia Peninsula to reach a new coal pier on Hampton Roads in Warwick County near the small unincorporated community of Newport News Point. However, building the railroad and coal pier was only the first part of Huntington's dreams for Newport News.

In 1886 he built a shipyard to repair ships servicing this transportation hub. In 1891 Newport News Shipbuilding and Drydock Company delivered its first ship, the tugboat Dorothy. By 1897 NNS had built three warships for the US Navy: USS Nashville, Wilmington and Helena. 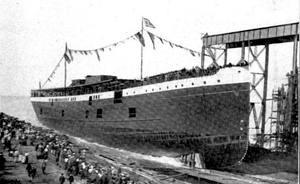 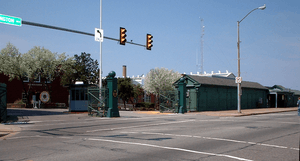 In 1906 the revolutionary HMS Dreadnought launched a great naval race worldwide. Between 1907 and 1923, Newport News built six of the US Navy's total of 22 dreadnoughts – USS Delaware, Texas, Pennsylvania, Mississippi, Maryland and West Virginia. All but the first were in active service in World War II. In 1907 President Theodore Roosevelt sent the Great White Fleet on its round-the-world voyage. NNS had built seven of its 16 battleships.

In 1914 NNS built SS Medina for the Mallory Steamship Company; as MV Doulos she was until 2009 the world's oldest active ocean-faring passenger ship.

Newport News and the shipyard 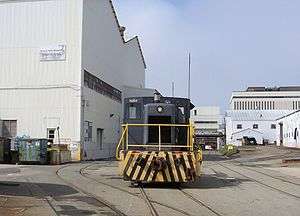 In the early years, leaders of the Newport News community and those of the shipyard were virtually interchangeable. Shipyard president Walter A. Post served from March 9, 1911 to Feb. 12, 1912, when he died. Earlier, he had come to the area as one of the builders of the C&O Railway's terminals, and had served as the first mayor of Newport News after it became an independent city in 1896. It was on March 14, 1914 that Albert Lloyd Hopkins, a young New Yorker trained in engineering, succeeded Post as President of the company. In May 1915 while traveling to England on shipyard business, aboard RMS Lusitania, Albert L. Hopkins tenure and life ended prematurely when that ship was torpedoed and sunk by a German U-boat[5] off Queenstown on the Irish coast. His assistant, Frederic Gauntlett, was also on board, but was able to swim to safety.[6] Homer Lenoir Ferguson was company vice president when Hopkins died, and assumed the presidency the following August.[7] He saw the company through both world wars, became a noted community leader, and was a co-founder of the Mariners' Museum with Archer Huntington. He served until July 31, 1946, after the second World War had ended on both the European and Pacific fronts. 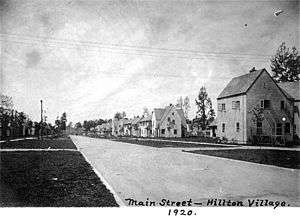 Just northwest of the shipyard, Hilton Village, one of the first planned communities in the country, was built by the federal government to house shipyard workers in 1918. The planners met with the wives of shipyard workers. Based on their input 14 house plans were designed for the projected 500 English-village-style homes. After the war, in 1922, Henry Huntington acquired it from the government, and helped facilitate the sale of the homes to shipyard employees and other local residents. Three streets there were named after Post, Hopkins, and Ferguson.[8]

Navy orders during and after the First World War

The Lusitania incident was among the events that brought the United States into World War I. Between 1918 and 1920 NNS delivered 25 destroyers, and after the war it began building aircraft carriers. USS Ranger (CV-4) was delivered in 1934, and NNS went on to build Yorktown and Enterprise.

After the First World War NNS completed a major reconditioning and refurbishment of the ocean liner SS Leviathan. Before the war she had been the German liner Vaterland, but the start of hostilities found her laid up in New York Harbor and she had been seized by the US Government in 1917 and converted into a troopship. War duty and age meant that all wiring, plumbing, and interior layouts were stripped and redesigned while her hull was strengthened and her boilers converted from coal to oil while being refurbished. Virtually a new ship emerged from NNS in 1923, and the SS Leviathan became the flagship of United States Lines.

In 1927 NNS launched the World's first significant turbo-electric ocean liner: Panama Pacific Line's 17,833 GRT SS California.[9] At the time she was also the largest merchant ship yet built in the USA,[9] although she was a modest size compared with the biggest European liners of her era. NNS launched California's sister ships Virginia in 1928 and Pennsylvania in 1929. NNS followed them by launching two even larger turbo-electric liners for Dollar Steamship Company: the 21,936 GRT SS President Hoover in 1930, followed by her sister President Coolidge in 1931. The SS America was launched in 1939 and entered service with United States lines shortly before World War II but soon returned to the shipyard for conversion to a troopship, USS West Point.

Navy orders before and during the Second World War 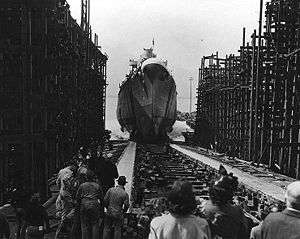 By 1940 the Navy had ordered a battleship, seven more aircraft carriers and four cruisers. During World War II, NNS built ships as part of the U.S. Government's Emergency Shipbuilding Program, and swiftly filled requests for "Liberty ships" that were needed during the war. It founded the North Carolina Shipbuilding Company, an emergency yard on the banks of the Cape Fear River and launched its first Liberty ship before the end of 1941, building 243 ships in all, including 186 Liberties. For its contributions during the war, the Navy awarded the company its "E" pennant for excellence in shipbuilding. NNS ranked 23rd among United States corporations in the value of wartime production contracts.[10]

In the 1970s, NNS launched two of the largest tankers ever built in the western hemisphere and also constructed three liquefied natural gas carriers – at over 390,000 deadweight tons, the largest ever built in the United States. NNS and Westinghouse Electric Company jointly form Offshore Power Systems to build floating nuclear power plants for Public Service Electric and Gas Company. In the 1980s, NNS produced a variety of Navy products, including Nimitz-class aircraft carrier nuclear aircraft carriers and Los Angeles-class submarine nuclear attack submarines. Since 1999 the shipyard has produced only warships for the Navy.[11]

In 2007, the US Navy found that workers had used incorrect metal to fuse together pipes and joints on submarines under construction and this could have led to cracking and leaks. In 2009 it was found that bolts and fasteners in weapons-handling systems on four Navy submarines, including USS New Mexico (SSN-779), North Carolina (SSN-777), Missouri (SSN-780), and California (SSN-781), were installed incorrectly, delaying the launching of the boats whilst the problems were corrected.[12]

In 1968, Newport News merged with Tenneco Corporation. In 1996, Tenneco initiated a spinoff of Newport News into an independent company (Newport News Shipbuilding).[13]

On March 15, 2011 Northrop Grumman announced the spin-off of this sector into a separate company, Huntington Ingalls Industries, Inc.,[16] and on March 31, began operating as a separate company and publicly trading under the symbol HII on the New York Stock Exchange.

In 2016, Newport News Shipbuilding perform works on deactivation and the nuclear fuel removing of USS Enterprise's reactor removed by Huntington Ingalls Industries under a $745 million contract with US Navy.[17]

Ships built at the Newport News yard include: 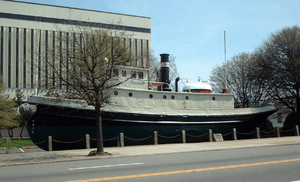