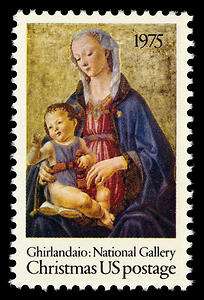 The first United States non-denominated postage stamp, issued in 1975, was valued at 10 cents at the time.

Non-denominated postage is postage intended to meet a certain postage rate that retains full validity for that intended postage rate even after the rate is increased. It does not show a monetary value, or denomination, on the face. In many English-speaking countries, it is called non-value indicator (NVI) postage. Invented to reduce the cost of printing large issues of low-value stamps to "top-up" old issues, NVI stamps are used worldwide, including in the United States and some European countries.

The Universal Postal Union approved the use of non-denominated stamps on international mail in 1995.

Canada's NVI was called the "Permanent" stamp, which is a trademarked term. It was originally marked by a white capital "P" overlaid on a red maple leaf, which is itself within a white circle. Later releases, such as the 2009 Silver Dart commemorative, varied the colours. In that example, the Maple Leaf around the "P" is white and the "P" is dropped out. The circle does not appear.

In announcing its decision to adopt non-denominated postage in 2006, Canada Post noted that it had to print more than 60 million one-cent stamps following the last price increase in 2005.[1] The Canadian NVI program was essentially equivalent to the American NVI program, as both covered regular domestic first-class mail. One Canada Post NVI stamp covers the cost of mailing a standard letter up to 30 g within Canada.[2]

On 11 December 2013, Canada Post unveiled its Five-point Action Plan, which temporarily removed "Permanent" stamps from sale, although they remained valid for postage. On March 31, the regular domestic stamp price increased from CA$0.63 to CA$0.85 (roll & bundle issued stamps) and up to $1.00 for single stamp purchase, beginning on 31 March 2014.[3] Sale of "Permanent" stamps resumed on that day at the new rate.[4]

An Post issue "N" stamps at the current domestic posting rate, which allow posting to both the Republic and Northern Ireland. These are generally available in post offices, yet not commonly sold. "E" stamps were briefly available, which allowed posting to anywhere in the European Union, but have not been sold in many years.

PostNL now issues all first-class stamps as NVIs, which simply bear a large numeral “1” that varies to match the typography used for each particular issue. Stamps meeting the first-class rate to Europe additionally bear the marking “Europa”, and those to foreign destinations outside of Europe bear the marking “Wereld” (“World”).

Same as The Netherlands

Finland's first NVI stamp (ikimerkki) was issued on 2.3.1992. There are two denominations, one valid for domestic 1st class, or overnight, domestic letter of up to 50 g and the other for similar 2nd class letter. The stamps may be combined for more expensive tariffs.

Sweden currently issues three forms of NVI valid for letters within Sweden of up to 20 g. These stamps may be combined when the weight of a letter exceeds 20 g. For up to 100 g – use two stamps; for up to 250 g – use 4 stamps; 500 g – 6 stamps; 1 kg – 8 stamps; 2 kg – 12 stamps. These charges only apply to regular letters – surcharges apply to bulkier letters. The Swedish name for NVI stamps is "valörlösa frimärken".

Regular first class stamps can also be used to mail letters abroad, providing that their combined value corresponds to the appropriate tariff by Swedish Post. For instance, to mail a letter up to 20 g in weight, two Brev stamps are required.[7]

Non-denominated postage was first introduced in the United Kingdom in 1989 for domestic mail, in part as a workaround to the problem of fast-changing rates.

The British Post Office has issued "non-value indicated" Machins using textual inscriptions "1ST" and "2ND" to indicate class of service rather than a numeric value. It has since introduced a number of variations including those for worldwide and European use, for different weights, and for postcards.

In past years, non-denominated postage issued by the United States differed from the issues of other countries, in that the stamps retained their original monetary value. Some stamps, such as those intended for local or bulk mail rate, were issued without denomination.

This practice began in 1975, when there was uncertainty as to the timing and extent of a rate increase from ten cents for the first ounce of first class postage as the end of the year approached. Christmas stamps were released without denomination, giving the United States Postal Service flexibility to refrain from reprinting hundreds of millions of stamps in a new denomination. The rate increase, to thirteen cents (US$0.13), occurred just after Christmas.

The United States also issued stamps with letter denomination, beginning from A, B, etc., during postal rate changes. After reaching the letter "H", this practice was discarded in favor of simply indicating the class of postage (e.g., first class) for which the stamp was intended.

In 2006, the US Postal Service applied for permission to issue a stamp similar to non-denominated stamps in the UK, termed the "forever stamp", for first-class postage.[8]

On March 26, 2007, the US Postal Service unveiled the first such stamp, which went on sale April 12, 2007, for 41 cents (US$0.41),[9] the so-called "Liberty Bell" stamp, which is marked "USA FIRST-CLASS FOREVER". On October 21, 2010, the second Forever Stamp, featuring pinecones on evergreen trees, was issued for the holiday season. Coils of Forever stamps were first issued on December 1, 2010, in the se-tenant format with Lady Liberty and the Flag design. A re-design, announced June 16, 2011, featured four American scientists: Melvin Calvin, chemist; Asa Gray, botanist; Maria Goeppert Mayer, physicist; and Severo Ochoa, biochemist. These stamps are always sold at the current first-class postage rate. They are always valid for the full first-class postage regardless of any rate increases since the stamps' purchase (e.g., unused forever stamps purchased in April 2007 therefore are valid for the current first-class postage rate, despite having been purchased for 41 cents). In 2011, all first-class stamps were made to be forever stamps. In 2015 the concept of forever stamps was expanded into all other types of stamps-postcard, additional ounce, non-machinable surcharge, two ounce and three ounce and these stamps have their intended purpose printed on them instead of a number.

Some fundraising (or semipostal) stamps have had this feature for years. For example, the breast cancer research stamp was issued in 1998. Forever Stamps can be used for international mail if additional postage is attached.[10] Alternatively, in the beginning of 2013, the USPS introduced a Global Forever stamp, for first-class one-ounce international mail.[11] In October of the same year, another Global Forever stamp with a Christmas motif was issued.[12] Two new stamps were issued the following year. For collectors all four were also printed in small numbers without die cuts, and so were imperforated. Another Global Forever issue, showing the Moon, followed in 2016. This was only issued with die cuts.[13]