For the album by Devin Townsend, see Physicist (album).
Not to be confused with Physician, a person who practices medicine. 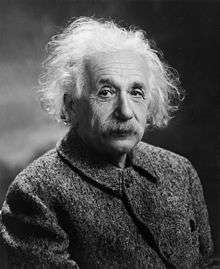 Albert Einstein, a key theoretical physicist in the 20th century who developed the theory of relativity and parts of early quantum theory

A physicist is a scientist who has specialized knowledge in the field of physics, the exploration of the interactions of matter and energy across the physical universe.

A physicist is a scientist who specializes or works in the field of physics.[1][2] The field generally includes two types of physicists: experimental physicists who are concerned with the observation of physical phenomena and experiments, and theoretical physicists who employ mathematical models and abstractions of physical objects and systems to rationalize, explain and predict natural phenomena.[1] Physicists study a wide range of phenomena in many branches of their field, spanning all length scales: from sub-atomic particles of which all ordinary matter is made (particle physics), to physical systems, to molecular length scales of chemical and biological interest, to cosmological length scales encompassing the Universe as a whole. Physicists generally are interested in the root or ultimate causes of phenomena, and usually frame their understanding in mathematical terms. Physicists can also apply their knowledge towards solving real-world problems or developing new technologies (also known as applied physics or engineering physics). Some physicists specialize in sectors outside the science of physics itself, such as engineering.[3][4][5]

In an 18th century experiment in "natural philosophy" (later to be called "physics") English scientist Francis Hauksbee works with an early electrostatic generator.

The study and practice of physics is based on an intellectual ladder of discoveries and insights from ancient times to the present. Many mathematical and physical ideas used today found their earliest expression in ancient Greek culture (for example Euclid, Thales of Miletus, Archimedes and Aristarchus) and Asian culture, as well as the Islamic medieval period (for example the work of Alhazen in the 11th century). The bulk of physics education can be said to flow from the scientific revolution in Europe, starting with the work of Galileo and Kepler in the early 1600s. Newton's laws of motion and Newton's law of universal gravitation were formulated in the 17th century. The general field of studying nature, natural philosophy, was divided into many fields in the 19th century when the concept of "science" received its modern shape with new titles emerging such as "biology" and "biologist", "physics" and "physicist" among other technical fields and titles.[6] The term physicist was coined by William Whewell (also the originator of the term "scientist") in his 1840 book The Philosophy of the Inductive Sciences.[7] Physicist branched into other fields such as electromagnetism in the 19th century, quantum mechanics in the early-to-mid 20th century, and an expanding field of cosmology in the 21st century.

Students observing a demonstration at a laser physics institute

The highest honor awarded to physicists is the Nobel Prize in Physics, awarded since 1901 by the Royal Swedish Academy of Sciences.

Physics programs typically deal with meta-theories and its laws regarding applied science, hence most undergraduate physicists take up additional careers where their knowledge of physics can be combined with further training in other disciplines, such as computer science, information technology, patent laws, engineering diplomas, animation, teaching, etc. for industry or self-employment. A typical undergraduate physics program covers essential basic competence required in areas of physics endeavor like astrophysics, laboratory knowledge, electricity and magnetism, thermodynamics, optics, modern physics, calculus, etc. and also in computer science and programming. Hence a majority of Physics bachelor degree holders are employed in the private sector. Other fields are academia, government and military service, nonprofit entities, labs and teaching.[15]