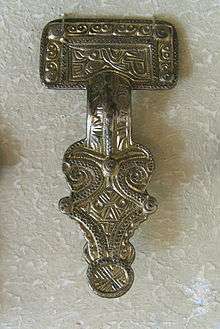 The front side of Nordendorf I fibula

Both fibulae are from the same grave, a woman's grave from an Alemannic cemetery of 448 row graves. They are labelled I and II, and were found in 1843 and 1844, respectively. Both fibulae bear Elder Futhark runic inscriptions. The first inscription is longer, and especially famous because of the explicit mention of theonyms of the South Germanic pantheon; Düwel (1982) calls it the "most important runic document of the continent".

The settlement to which the cemetery was attached was situated right on the important Via Claudia Augusta and presumably owed its wealth to trade.

The first fibula bears the following Elder Futhark inscription containing the names of Wodan, the chief god of the Alamanni, and Þonar, the thunder god.[1]

The inscription is in two parts:

Part (I) is written in a single line, across most of the width of the fibula; part (II) is arranged upside-down with respect to part (I), in three lines crowded to one side of the fibula, with one word per line.

The awa leubwini is a dedication, Awa being a woman's name (hypokoristic of Awila), and leub-wini meaning either "dear friend" or "beloved" (compounded of leub "love" and wini "friend"), or a second personal name, thus perhaps "[gift from] Awa and Leubwini".

The second part, apparently added to the conventional dedication, is an exceptional testimony of continental Germanic paganism. The explicit mention of theonyms is extremely rare in all of the runic corpus, including the later Younger Futhark Scandinavian tradition.

The prefix wigi- before the name of Þonar is interpreted either as from *wīgian "to hallow" or as from *wīgan "to fight" (so the thunder god is called either "holy thunder" or "fight-thunder").

It would seem plausible for logaþore to be the name of another god, yielding a divine triad, but there is no obvious identification in surviving sources regarding Germanic paganism as we know it.[1] Both Lóðurr and Loki have been proposed but the etymological reasoning is tenuous.[1]

K. Düwel interprets logaþore as "magician, sorcerer", and translates "Wodan and Donar are magicians/sorcerers", which could indicate either an early Christian protective charm against the old gods. On the other hand, the inscription may be an invocation of the gods' beneficial or healing power by an adherent of the old faith. With the fibula's date falling precisely in the period of gradual Christianization of the Alamanni (the bishopric of Konstanz was established around AD 600), both are probable, depending on the interpretation of the wigi-.[2] 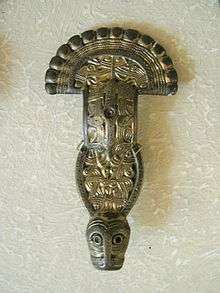 The second fibula has a short, partly illegible inscription, read as

This has been interpreted as birl[i]n io elk "(little) bear and elk".