For other uses, see Augsburg (disambiguation). 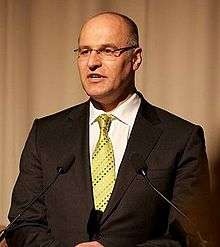 Augsburg [German pronunciation: [ˈʔaʊ̯ksbʊʁk]] (Bavarian: Augschburg) is a city in Swabia, Bavaria, Germany. It was a Free Imperial City for over 500 years.

It is a university town and home of the Regierungsbezirk Schwaben and the Bezirk Schwaben. Augsburg is an urban district and home to the institutions of the Landkreis Augsburg. It is the third-largest city in Bavaria (after Munich and Nuremberg) with a population of 286,000 citizens.[2] After Neuss and Trier, Augsburg is Germany's third oldest city, being founded by the Romans as Augusta Vindelicorum, named after the Roman emperor Augustus.

Augsburg is the only German city with its own legal holiday, the Augsburger Hohes Friedensfest, celebrated on August 8 of every year. This gives Augsburg more legal holidays than any other region or city in Germany.[3]

Augsburg was the home of two patrician families that rose to great prominence internationally, replacing the Medicis as Europe's leading bankers, the Fugger and the Welser families.

Augsburg lies at the convergence of the Alpine rivers Lech and Wertach and on the Singold. The oldest part of the city and the southern quarters are on the northern foothills of a high terrace, which emerged between the steep rim of the hills of Friedberg in the east and the high hills of the west. In the south extends the Lechfeld, an Outwash plain of the post ice age between the rivers Lech and Wertach, where rare primeval landscapes were preserved. The Augsburg city forest and the Lech valley heaths today rank among the most species-rich middle European habitats.

On Augsburg borders the nature park Augsburg Western Woods - a large forestland. The city itself is also heavily greened. As a result, in 1997 Augsburg was the first German city to win the Europe-wide contest Entente Florale for Europe's greenest and most livable city.

Augsburg is surrounded by the counties Landkreis Augsburg in the west and Aichach-Friedberg in the east.

Augsburg has a humid continental climate (Dfb in the Koeppen climate classification).

The city was founded in 15 BC by Drusus and Tiberius as Augusta Vindelicorum (Latin pronunciation: [awˈɡuːsta wɪndɛlɪˈkoːrʊ̃] English pronunciation of Latin: /aʊˈɡuːstə vɪnˈdɛlɪˌkoʊrəm/[4]), on the orders of their stepfather Emperor Augustus. The name means "Augusta of the Vindelici". This garrison camp soon became the capital of the Roman province of Raetia.

Early development was due to a 400-year affiliation with the Roman Empire, especially because of its excellent military, economic and geographic position at the convergence of the Alpine rivers Lech and Wertach, and with direct access to most important Alpine passes. Thus, Augsburg was the intersection of many important European east-west and north-south connections, which later evolved as major trade routes of the Middle Ages.[5] 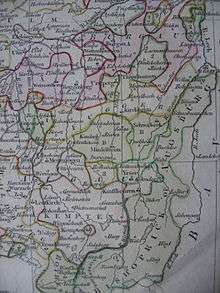 Around 120 AD Augsburg became the capital of the Roman province Raetia. Augsburg was sacked by the Huns in the 5th century AD, by Charlemagne in the 8th century, and by Welf of Bavaria in the 11th century, but arose each time to greater prosperity.

Historical spellings of the name of the city include "Ausburch" and "Ausbourch."

Augsburg was granted the status of a Free Imperial City on March 9, 1276 and from then until 1803, it was independent of its former overlord, the Prince-Bishop of Augsburg. Frictions between the city-state and the prince-bishops were to remain frequent however, particularly after Augsburg became Protestant and curtailed the rights and freedoms of Catholics.

With a strategic location as intersection of trade routes to Italy, the Free Imperial City became a major trading center. Augsburg produced large quantities of woven goods, cloth and textiles. Augsburg became the base of two banking families that rose to great prominence, the Fuggers and the Welsers. The Fugger family donated the Fuggerei part of the city devoted to housing for needy citizens in 1516, which remains in use today.

In 1530, the Augsburg Confession was presented to the Holy Roman Emperor at the Diet of Augsburg. Following the Peace of Augsburg in 1555, after which the rights of religious minorities in imperial cities were to be legally protected, a mixed Catholic–Protestant city council presided over a majority Protestant population; see Paritätische Reichsstadt.

Religious peace in the city was largely maintained despite increasing Confessional tensions until the Thirty Years' War (1618–1648). In 1629, Holy Roman Emperor Ferdinand II issued the Edict of Restitution, which restored the legal situation of 1552 and again curtailed the rights of the Protestant citizens. The inequality of the Edict of Restitution was rescinded when in April 1632, the Swedish army under Gustavus Adolphus captured Augsburg without resistance.

In 1634, the Swedish army was routed at nearby Nördlingen. By October 1634, Catholic troops had surrounded Augsburg. The Swedish garrison refused to surrender and a siege ensued through the winter of 1634/35 and thousands died from hunger and disease. According to J. N. Hays, "In the period of the Swedish occupation and the Imperial siege the population of the city was reduced from about 70,000 to about 16,000, with typhus and plague playing major roles."[6]

In 1686, Emperor Leopold I formed the League of Augsburg, termed by the English as the "Grand Alliance" after England joined in 1689: a European coalition, consisting (at various times) of Austria, Bavaria, Brandenburg, England, the Holy Roman Empire, the Palatinate of the Rhine, Portugal, Savoy, Saxony, Spain, Sweden, and the United Provinces. It was formed to defend the Palatinate from France. This organization fought against France in the Nine Years War.

Augsburg's peak boom years occurred during the 15th and 16th centuries thanks to the bank and metal businesses of the merchant families Fugger and Welser, who held a local near total monopoly on their respective industries. Augsburg's wealth attracted artists seeking patrons and rapidly became a creative centre for famous painters, sculptors and musicians notably birthplace of : the Holbein painter family. In later centuries the city was the birthplace of the composer Leopold Mozart[7] and the playwright Berthold Brecht.[8] Rococo became so prevalent that it became known as “Augsburg style” throughout Germany. 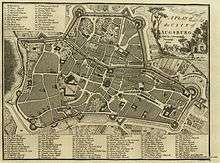 During the end of the 19th century, Augsburg's textile industry again rose to prominence followed by the connected machine manufacturing industry.

In 1941, Rudolf Hess without Adolf Hitler's permission secretly took off from a local airport and flew to Scotland to meet the Duke of Hamilton, and crashed in Eaglesham in an attempt to mediate the end of the European front of World War II and join sides for the upcoming Russian Campaign.

Following the war, the three Kaserne would change hands confusingly between the American and Germans, finally ending up in US hands for the duration of the Cold War. The former Wehrmacht Kaserne became the three main US barracks in Augsburg: Reese;, Sheridan and FLAK. US Base FLAK had been an anti-aircraft barracks since 1936 and US Base Sheridan "united" the former infantry barracks with a smaller Kaserne for former Luftwaffe communications units.

The American military presence in the city started with the 11th Airborne Division, followed by the 24th Infantry Division, U.S. Army VII Corps artillery, USASA Field Station Augsburg and finally the 66th Military Intelligence Brigade, which returned the former Kaserne to German hands in 1998. Originally the Heeresverpflegungshauptamt Südbayern and an Officers' caisson existed on or near the location of Reese-Kaserne, but was demolished by the occupying Americans.

From 1266 until 1548, the terms Stadtpfleger (head of town council) and Mayor were used interchangeably, or occasionally, simultaneously. In 1548 the title was finally fixed to Stadtpfleger, who officiated for several years and was then awarded the title for life (though no longer governing), thus resulting confusingly, in records of two or more simultaneous Stadtpfleger.

After the transfer to Bavaria in 1806, Augsburg was ruled by a Magistrate with two mayors, supported by an additional council of "Community Commissioners": the Gemeindebevollmächtige.

As of 1907, the Mayor was entitled Oberbürgermeister, as Augsburg had reached a population of 100,000, as per the Bavarian Gemeindeordnung.

Members of the Bundestag

Augsburg is located in the Wahlkreis 253 Augsburg-Stadt constituency, which includes Königsbrunn and the District of Augsburg (Landkreis Augsburg).

Volker Ullrich of the CSU was directly elected to the Bundestag in the 18th German Bundestag.

Indirectly elected to the Bundestag to adhere to the Landesliste were Ulrike Bahr for the SPD and Claudia Roth for Bündnis 90/Die Grünen.[13] 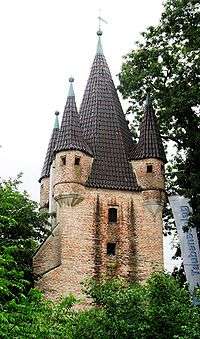 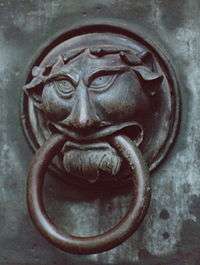 Ring of Mercy on the Dom (Cathedral) St. Maria 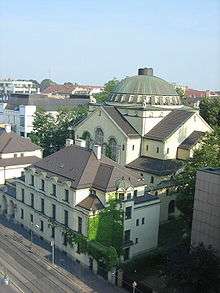 Information on the partner cities can also be found at www.augsburg.de

The main road link is autobahn A 8 between Munich and Stuttgart.

The Augsburg tramway network is now 35.5 km-long after the opening of new lines to the university in 1996, the northern city boundary in 2001 and to the Klinikum Augsburg (Augsburg hospital) in 2002. Tram line 6, which runs 5.2 km from Friedberg West to Rotes Tor, opened in December 2010.[16]

The front of the station

Augsburg has seven stations, the Central Station (Hauptbahnhof), Hochzoll, Oberhausen, Haunstetterstraße, Morellstraße, Messe and Inningen. The Central Station, built from 1843 to 1846, is Germany’s oldest main station in a large city still providing services in the original building. It is currently being modernized and an underground tram station is built underneath it. Hauptbahnhof is on the Munich–Augsburg and Ulm–Augsburg lines and is connected by ICE and IC services to Munich, Berlin, Dortmund, Frankfurt, Hamburg and Stuttgart. As of December 2007, the French TGV connected Augsburg with a direct High Speed Connection to Paris. In addition EC and night train services connect to Amsterdam, Paris and Vienna and connections will be substantially improved by the creation of the planned Magistrale for Europe.

The AVV operates seven Regionalbahn lines from the main station to:

Starting in 2008, the regional services are planned to be altered to S-Bahn frequencies and developed long term as integrated into the Augsburg S-Bahn.

Until 2005 Augsburg was served by nearby Augsburg Airport (AGB). In that year all air passenger transport was relocated to Munich Airport. Since then, the airport is used almost entirely for general aviation and business airplanes.[17] Passenger flights resumed in 2016 with a once-per-week flight to Salzburg. 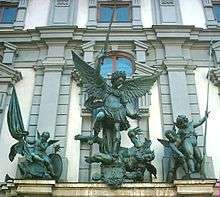 Statue of Archangel Michael in Augsburg

Augsburg is a vibrant industrial city. Many global market leaders namely MAN, EADS or KUKA produce high technology products like printing systems, large diesel engines, industrial robots or components for the Airbus A380 and the Ariane carrier rocket. After Munich, Augsburg is considered the high-tech centre for Information and Communication in Bavaria and takes advantage of its lower operating costs, yet close proximity to Munich and potential customers.

Augsburg is home to the following universities and colleges:

The local newspaper is the Augsburger Allgemeine first published in 1807. There are also several local radio stations and a local TV station (a.tv). 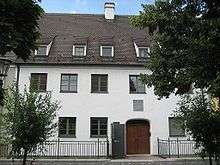 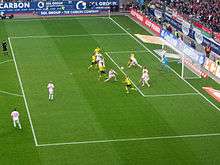 FC Augsburg against Borussia Dortmund in the Bundesliga at the SGL arena in November 2012.

FC Augsburg is a football team based in Augsburg and plays in the WWK ARENA. FC Augsburg was promoted to Bundesliga in 2011. The new stadium (opened in July 2009) also hosted games of the 2011 FIFA Women's World Cup.

The city is home to a DEL (first-division) ice hockey team, the Augsburger Panther. The original club, AEV, was formed in 1878, the oldest German ice sport club and regularly draws around 4000 spectators, quite reasonable for German ice hockey. Home games are played at the Curt Frenzel Stadion: a recently rebuilt (2012-2013) indoor rink and modern stadium. Also Augsburg is home to one of the most traditional German Baseball clubs, the Augsburg Gators.

For the 1972 Olympic Games in Munich, a Lech River dam protective diversionary canal for river ice was converted into the world's first artificial whitewater slalom course: the Eiskanal and remains a world-class venue for whitewater competition and served as prototype for two dozen similar foreign courses.

While commonly called Fuggerstadt (Fuggers' city) due to the Fuggers residing there, within Swabia it is also often referred to as Datschiburg: which originated sometime in the 19th century refers to Augsburg's favorite sweet: the Datschi made from fruit, preferably prunes, and thin cake dough.[22] The Datschiburger Kickers charity football team (founded in 1965) reflects this in its choice of team name.[23][24]

Among younger people, the city is commonly called "Aux" for short.