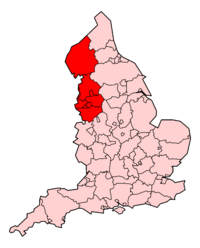 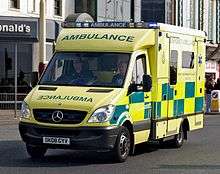 NWAS ambulance on an emergency call

It is one of 10 Ambulance Trusts providing England with Emergency medical services, and is part of the National Health Service, receiving direct government funding for its role. There is no charge to patients for use of the service, and under the Patient's charter, every person in the United Kingdom has the right to the attendance of an ambulance in an emergency.

Based in Bolton, the new Trust provided services to almost 7 million people in Greater Manchester, Cheshire, Merseyside, Lancashire, Cumbria,and the North Western fringes of the High Peak district of Derbyshire (covering the towns of Glossop and Hadfield) in an area of some 5,500 square miles (14,000 km2). The trust lost the contract for non-emergency patient transport services in Cheshire, Warrington and Wirral. It will transfer to the West Midlands Ambulance Service in July 2016.[3]

NWAS use Mercedes-Benz Sprinters or Fiat Ducatos as their standard emergency ambulance, Skoda Scouts as the main Rapid response car and Renault Masters as the primary PTS vehicle.

The Trust currently operates from 114 ambulance stations and employs around 4,900 staff.

NWAS was the first ambulance trust to be inspected by the Care Quality Commission, in August 2014. The Commission found the trust provided safe and effective services which were well-led and with a clear focus on quality but it was criticised for taking too many callers to hospital and for sending ambulances when other responses would have been more appropriate.[4]