South Central Ambulance Service NHS Foundation Trust (SCAS) is the authority responsible for providing NHS ambulance services in Berkshire, Buckinghamshire, Hampshire and Oxfordshire in the South East England region. It is one of 10 NHS Ambulance Trusts providing England with emergency medical services, and is part of the National Health Service, receiving direct government funding for its role. There is no charge to patients for use of the service, and under the Patient's Charter, every person in the United Kingdom has the right to the attendance of an ambulance in an emergency.

As an ambulance service, SCAS primarily responds to emergency 999 calls, in addition to calls from the NHS non-emergency number (111).

The service also provides an emergency transport service for patients in life-threatening condition and a Non-Emergency Patient Transport Service (NEPTS). The NEPTS transports patients unable to use public transport due to their medical conditions, patients using outpatient clinics and patients being admitted or discharged from hospital.[1] The Trust also has a commercial division, which provides first aid training to members of the public, a community equipment service and logistic services.[2]

It has a resilience and specialist operations department which plans for major or hazardous incidents.[3] This includes a Hazardous Area Response Team (HART), which responds to emergencies involving chemical, biological, radiological or nuclear materials, as well as major incidents.[4] The Trust also trains and supports volunteer community first responders.[5]

It is the only NHS ambulance organisation in the UK to be supported by its own League of Friends, a registered charity. The South Central Ambulance League of Friends raises funds that are used to enhance the standard of care for patients, provide additional benefits for service personnel, encourage the acquisition of essential life-support skills among the public, and support the deployment of volunteer community first responders. This group had been founded in 1982 to raise funds for the former Oxfordshire Ambulance NHS Trust.[6] 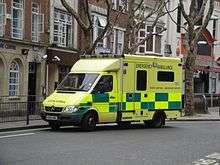 In June 2011 it was named England's top performing ambulance service, managing to respond to 77.5% of Cat A calls within the 8 minute target time, compared to the national average of 74.9%.[8] In October 2011 the BBC discovered that SCAS spent more on private ambulance services to cover 999 calls than any other service in the country.[9]

In October 2013 the Trust accidentally published on its website a document listing the age, sexuality and religion of all its 2,826 staff members.[11]

It took over patient transport services in Hampshire in October 2014.[12] In 2014 the trust held a recruitment drive in Poland to help fill vacancies.[13] On November 1st 2016, it was announced that the trust would take over the running of NEPTS in the south-east of England from April 2017.[14] The service had previously been run by South East Coast Ambulance Service until April 1st 2016, when it had been taken over by Coperforma, a private-sector provider which had been unable to provide a satisfactory level of service.