Obedience, in human behavior, is a form of "social influence in which a person yields to explicit instructions or orders from an authority figure".[1] Obedience is generally distinguished from compliance, which is behavior influenced by peers, and from conformity, which is behavior intended to match that of the majority. Depending on context, obedience can be seen as immoral, amoral or moral.

Humans have been shown to be obedient in the presence of perceived legitimate authority figures, as shown by the Milgram experiment in the 1960s, which was carried out by Stanley Milgram to find out how the Nazis managed to get ordinary people to take part in the mass murders of the Holocaust. The experiment showed that obedience to authority was the norm, not the exception. Regarding obedience, Milgram said that "Obedience is as basic an element in the structure of social life as one can point to; Some system of authority is a requirement of all communal living, and it is only the man dwelling in isolation who is not forced to respond, through defiance or submission, to the commands of others."[2] A similar conclusion was reached in the Stanford prison experiment.

Although other fields have studied obedience, social psychology has been primarily responsible for the advancement of research on obedience. It has been studied experimentally in several different ways.

In one classical study, Stanley Milgram (as part of the Milgram experiment) created a highly controversial and often replicated study. The experiment involved deception of the participants. In the experiment, participants were told they were going to contribute to a study about punishment and learning, but the actual focus was on how long they would listen to and obey orders from the experimenter. The participants were instructed that they had to shock a person in another room for every wrong answer on a learning task, and the shocks increased with intensity for each wrong answer. If participants questioned the procedure, the researcher would encourage them further. The dependent variable for this experiment was the voltage amount of shocks administered.[2]

The other classical study on obedience was conducted at Stanford University during the 1970s. Phillip Zimbardo was the main psychologist responsible for the experiment. In the Stanford Prison Experiment, college age students were put into a pseudo prison environment in order to study the impacts of "social forces" on participants behavior.[3] Unlike the Milgram study in which each participant underwent the same experimental conditions, here using random assignment half the participants were prison guards and the other half were prisoners. The experimental setting was made to physically resemble a prison while simultaneously inducing "a psychological state of imprisonment".[3]

The Milgram study found that participants would obey orders even when it posed severe harm to others. This result was surprising to Milgram because he thought that "subjects have learned from childhood that it is a fundamental breach of moral conduct to hurt another person against his will".[2] Zimbardo found similar results as the guards in the study obeyed orders so much that their behavior turned aggressive. Prisoners likewise were hostile to and resented their guards, and because of the psychological duress induced in the experiment, it had to be shut down after only 6 days.[3]

The previous two studies greatly influenced how modern psychologists think about obedience. Milgram's study in particular generated a large response from the psychology community. In a modern study, Jerry Burger replicated Milgram's method with a few alterations. Burger's method was identical to Milgram's except when the shocks reached 150 volts, participants decided whether or not they wanted to continue and then the experiment ended (base condition). To ensure the safety of the participants, Burger added a two-step screening process; this was to rule out any participants that may react negatively to the experiment. In the modeled refusal condition, two confederates were used, where one confederate acted as the learner and the other was the teacher. The teacher stopped after going up to 90 volts, and the participant was asked to continue where the confederate left off. This methodology was considered more ethical because many of the adverse psychological effects seen in previous studies' participants occurred after moving past 150 volts. Additionally, since Milgram's study only used men, Burger tried to determine if there were differences between genders in his study and randomly assigned equal numbers of men and women to the experimental conditions.[4]

Using data from his previous study, Burger probed participant's thoughts about obedience. Participants' comments from the previous study were coded for the number of times they had comments pertaining to "personal responsibility and the learner's well being".[5] The number of prods the participants used in the first experiment were also measured.

Following the Utrecht studies, another study used the stress remarks method to see how long participants would obey authority. The dependent measures for this experiment were the number of stress remarks made and a separate measure of personality designed to measure individual differences.[7]

Burger's first study had results similar to the ones found in Milgram's previous study. The rates of obedience were very similar to those found in the Milgram study, showing that participants' tendency to obey has not declined over time. Additionally, Burger found that both genders exhibited similar behavior, suggesting that obedience will occur in participants independent of gender. In Burger's follow-up study, he found that participants that worried about the well being of the learner were more hesitant to continue the study. He also found that the more the experimenter prodded the participant to continue, the more likely they were to stop the experiment. The Utrecht University study also replicated Milgram's results. They found that although participants indicated they did not enjoy the task, over 90% of them completed the experiment.[6] The Bocchiaro and Zimbardo study had similar levels of obedience compared to the Milgram and Utrecht studies. They also found that participants would either stop the experiment at the first sign of the learner's pleas or would continue until the end of the experiment (called "the foot in the door scenario").[7] In addition to the above studies, additional research using participants from different cultures (including Spain,[8] Australia,[9] and Jordan)[10] also found participants to be obedient.

One of the major assumptions of obedience research is that the effect is caused only by the experimental conditions, and Thomas Blass' research contests this point, as in some cases participant factors involving personality could potentially influence the results.[11] In one of Blass' reviews on obedience, he found that participant's personalities can impact how they respond to authority,[11] as people that were high in authoritarian submission were more likely to obey.[12] He replicated this finding in his own research, as in one of his experiments, he found that when watching portions of the original Milgram studies on film, participants placed less responsibility on those punishing the learner when they scored high on measures of authoritarianism.[13]

In addition to personality factors, participants who are resistant to obeying authority had high levels of social intelligence.[14]

Obedience can also be studied outside of the Milgram paradigm in fields such as economics or political science. One economics study that compared obedience to a tax authority in the lab versus at home found that participants were much more likely to pay participation tax when confronted in the lab.[15] This finding implies that even outside of experimental settings, people will forgo potential financial gain to obey authority.

Another study involving political science measured public opinion before and after a Supreme Court case debating whether or not states can legalize physician assisted suicide. They found that participants' tendency to obey authorities was not as important to public opinion polling numbers as religious and moral beliefs.[16] Although prior research has demonstrated that the tendency to obey persists across settings, this finding suggests that at personal factors like religion and morality can limit how much people obey authority.

Both the Milgram and Stanford experiments were conducted in experimental circumstances. In 1966, psychiatrist Charles K. Hofling published the results of a field experiment on obedience in the nurse–physician relationship in its natural hospital setting. Nurses, unaware they were taking part in an experiment, were ordered by unknown doctors to administer dangerous doses of a (fictional) drug to their patients. Although several hospital rules disallowed administering the drug under the circumstances, 21 out of the 22 nurses would have given the patient an overdose of medicine.[17]

Many traditional cultures regard obedience as a virtue; historically, societies have expected children to obey their elders (compare patriarchy, slaves their owners, serfs their lords in feudal society, lords their king, and everyone God. Even long after slavery ended in the United States, the Black codes required black people to obey and submit to whites, on pain of lynching. Compare the religious ideal of surrender and its importance in Islam (the word Islam can literally mean "surrender").[18]

In some Christian weddings, obedience was formally included along with honor and love as part of a conventional bride's (but not the bridegroom's) wedding vow. This came under attack with women's suffrage and the feminist movement. As of 2014 the inclusion of a promise to obey in marriage vows has become optional in some denominations.

Some animals can easily be trained to be obedient by employing operant conditioning, for example obedience schools exist to condition dogs into obeying the orders of human owners.

Learning to obey adult rules is a major part of the socialization process in childhood, and many techniques are used by adults to modify the behavior of children. Additionally, extensive training is given in armies to make soldiers capable of obeying orders in situations where an untrained person would not be willing to follow orders. Soldiers are initially ordered to do seemingly trivial things, such as picking up the sergeant's hat off the floor, marching in just the right position, or marching and standing in formation. The orders gradually become more demanding, until an order to the soldiers to place themselves into the midst of gunfire gets an instinctively obedient response.

Embodiment of prestige or power 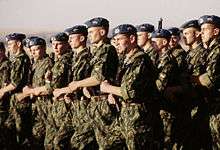 Obedience occurs in several situations; most often referred to is the obedience of soldiers to a superior officer.

When the Milgram experimenters were interviewing potential volunteers, the participant selection process itself revealed several factors that affected obedience, outside of the actual experiment.

Interviews for eligibility were conducted in an abandoned complex in Bridgeport, Connecticut.[2][19] Despite the dilapidated state of the building, the researchers found that the presence of a Yale professor as stipulated in the advertisement affected the number of people who obeyed. This was not further researched to test obedience without a Yale professor because Milgram had not intentionally staged the interviews to discover factors that affected obedience.[2] A similar conclusion was reached in the Stanford prison experiment.[19]

In the actual experiment, prestige or the appearance of power was a direct factor in obedience—particularly the presence of men dressed in gray laboratory coats, which gave the impression of scholarship and achievement and was thought to be the main reason why people complied with administering what they thought was a painful shock.[2] A similar conclusion was reached in the Stanford prison experiment.

Raj Persaud, in an article in the BMJ,[20] comments on Milgram's attention to detail in his experiment:

Despite the fact that prestige is often thought of as a separate factor, it is, in fact, merely a subset of power as a factor. Thus, the prestige conveyed by a Yale professor in a laboratory coat is only a manifestation of the experience and status associated with it and/or the social status afforded by such an image.