Occupation of the Ruhr 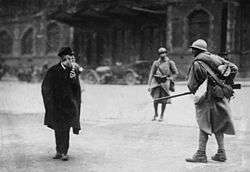 French soldiers in the Ruhr in 1923

The Occupation of the Ruhr (German: Ruhrbesetzung) was a period of military occupation of the German Ruhr valley by France and Belgium between 1923 and 1925 in response to the Weimar Republic's failure to continue its reparation payments in the aftermath of World War I. 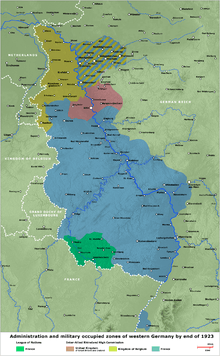 The Ruhr region had been occupied by Allied troops in the immediate aftermath of the First World War, during the Occupation of the Rhineland (1918–1919). Under the terms of the Treaty of Versailles (1919), which formally ended the war, Germany accepted responsibility for the damages caused in the war and was obliged to pay war reparations to the various Allies, principally France. The total sum of reparations demanded from Germany—around 226 billion gold marks (US $851 billion in 2016)—was decided by an Inter-Allied Reparations Commission. In 1921, the amount was reduced to 132 billion (at that time, $31.4 billion (US $442 billion in 2016), or £6.6 billion (UK £284 billion in 2016)).[1] Even with the reduction, the debt was huge. As some of the payments were in industrial raw materials, German factories were unable to function, and the German economy suffered, further damaging the country's ability to pay.[2]

By late 1922, the German defaults on payments had grown so regular that a crisis engulfed the Reparations Commission; the French and Belgian delegates urged occupying the Ruhr as a way of forcing Germany to pay more, while the British delegate urged a lowering of the payments.[3] As a consequence of a German default on timber deliveries in December 1922, the Reparations Commission declared Germany in default, which led to the Franco-Belgian occupation of the Ruhr in January 1923.[4] Particularly galling to the French was that the timber quota the Germans defaulted on was based on an assessment of their capacity the Germans made themselves and subsequently lowered.[5] The Allies believed that the government of Chancellor Wilhelm Cuno had defaulted on the timber deliveries deliberately as a way of testing the will of the Allies to enforce the treaty.[5] The entire conflict was further exacerbated by a German default on coal deliveries in early January 1923, which was the thirty-fourth coal default in the previous thirty-six months.[6] The French Premier Raymond Poincaré was deeply reluctant to order the Ruhr occupation and took this step only after the British had rejected his proposals for non-military sanctions against Germany.[7] Frustrated at Germany not paying reparations, Poincaré hoped for joint Anglo-French economic sanctions against Germany in 1922 and opposed military action. However, by December 1922 he was faced with Anglo-American-German opposition and saw coal for French steel production and payments in money as laid out in the Treaty of Versailles draining away. Poincaré was exasperated with British opposition, and wrote to the French ambassador in London:

Judging others by themselves, the English, who are blinded by their loyalty, have always thought that the Germans did not abide by their pledges inscribed in the Versailles Treaty because they had not frankly agreed to them. ... We, on the contrary, believe that if Germany, far from making the slightest effort to carry out the treaty of peace, has always tried to escape her obligations, it is because until now she has not been convinced of her defeat. ... We are also certain that Germany, as a nation, resigns herself to keep her pledged word only under the impact of necessity.[8]

Poincaré decided to occupy the Ruhr on 11 January 1923 to extract the reparations himself. The real issue during the Ruhrkampf (Ruhr struggle), as the Germans labelled the battle against the French occupation, was not the German defaults on coal and timber deliveries but the sanctity of the Versailles treaty.[9] Poincaré often argued to the British that letting the Germans defy Versailles in regards to the reparations would create a precedent that would lead to the Germans dismantling the rest of the Versailles treaty.[10] Finally, Poincaré argued that once the chains that had bound Germany in Versailles were destroyed, it was inevitable that Germany would plunge the world into another world war.[10]

Initiated by French Prime Minister Raymond Poincaré, the invasion took place on 11 January 1923. General Alphonse Caron’s 32nd infantry corps under the supervision of General Jean-Marie Degoutte carried out the operation.[11] Some theories state that the French aimed to occupy the centre of German coal, iron, and steel production in the Ruhr area valley simply to get the money. Some others state that France did it to ensure that the reparations were paid in goods, because the Mark was practically worthless because of hyperinflation that already existed at the end of 1922. France had the iron ore and Germany had the coal. Each state wanted free access to the resource it was short of, as together these resources had far more value than separately. (Eventually this problem was resolved in the post-World War II European Coal and Steel community.)

Following France's decision to invade the Ruhr,[12] the Inter-Allied Mission for Control of Factories and Mines (MICUM)[13] was set up as a means of ensuring coal repayments from Germany.[14] 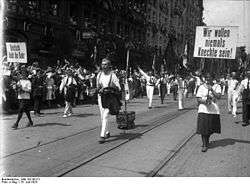 Protests by gymnasts from the Ruhr at the 1923 Munich Gymnastics Festival (The sign on the left reads "The Ruhr remains German"; the sign on the right reads "We never want to be vassals".)

The occupation was greeted by a campaign of passive resistance. Approximately 130 German civilians were killed by the French occupation army during the events, including during civil disobedience protests, e.g. against dismissal of German officials.[15][16] Some theories assert that to pay for passive resistance in the Ruhr, the German government began the hyperinflation that destroyed the German economy in 1923.[9] Others state that the road to hyperinflation was well established before with the reparation payments that started on November 1921.[17] (see 1920s German inflation) In the face of economic collapse, with high unemployment and hyperinflation, the strikes were eventually called off in September 1923 by the new Gustav Stresemann coalition government, which was followed by a state of emergency. Despite this, civil unrest grew into riots and coup attempts targeted at the government of the Weimar Republic, including the Beer Hall Putsch. The Rhenish Republic was proclaimed at Aachen (Aix-la-Chapelle) in October 1923.

Though the French did succeed in making their occupation of the Ruhr pay, the Germans through their passive resistance in the Ruhr and the hyperinflation that wrecked their economy, won the world's sympathy, and under heavy Anglo-American financial pressure (the simultaneous decline in the value of the franc made the French very open to pressure from Wall Street and the City), the French were forced to agree to the Dawes Plan of April 1924, which substantially lowered German reparations payments.[18] Under the Dawes Plan, Germany paid only 1 billion marks in 1924, and then increasing amounts for the next three years, until the total rose to 2.25 billion marks by 1927.

Internationally the occupation did much to boost sympathy for Germany, although no action was taken in the League of Nations since it was technically legal under the Treaty of Versailles.[19] The French, with their own economic problems, eventually accepted the Dawes Plan and withdrew from the occupied areas in July and August 1925. The last French troops evacuated Düsseldorf and Duisburg along with the city's important harbour in Duisburg-Ruhrort, ending French occupation of the Ruhr region on 25 August 1925. According to Sally Marks, the occupation of the Ruhr "was profitable and caused neither the German hyperinflation, which began in 1922 and ballooned because of German responses to the Ruhr occupation, nor the franc's 1924 collapse, which arose from French financial practices and the evaporation of reparations".[20] Marks reckons the profits, after Ruhr-Rhineland occupation costs, were nearly 900 million gold marks.[21]

Despite his disagreements with Britain, he desired to preserve the Anglo-French entente and thus moderated his aims to a degree. His major goal was the winning of the extraction of reparations payments from Germany. His inflexible methods and authoritarian personality led to the failure of his diplomacy.[22]

When on 12 July 1922, Germany demanded a moratorium on reparation payments, tension developed between the French government of Raymond Poincaré and the Coalition government of David Lloyd George. The British Labour Party demanded peace and denounced Lloyd George as a troublemaker. It saw Germany as the martyr of the postwar period and France as vengeful and the principal threat to peace in Europe. The tension between France and Britain peaked during a conference in Paris in early 1923, by which time the coalition led by Lloyd George had been replaced by the Conservatives. The Labour Party opposed the occupation of the Ruhr throughout 1923, which it rejected as French imperialism. The British Labour Party believed it had won when Poincaré accepted the Dawes Plan in 1924.[23] 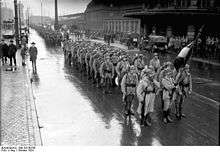 To deal with the implementation of the Dawes Plan, a conference took place in London in July–August 1924.[24] The British Labour Prime Minister Ramsay MacDonald, who viewed reparations as impossible to pay successfully pressured the French Premier Édouard Herriot into a whole series of concessions to Germany.[24] The British diplomat Sir Eric Phipps commented that “The London Conference was for the French 'man in the street' one long Calvary as he saw M. Herriot abandoning one by one the cherished possessions of French preponderance on the Reparations Commission, the right of sanctions in the event of German default, the economic occupation of the Ruhr, the French-Belgian railroad Régie, and finally, the military occupation of the Ruhr within a year”.[25] The Dawes Plan was significant in European history as it marked the first time that Germany had succeeded in defying Versailles, and revised an aspect of the treaty in its favour.

The Saar region remained under French control until 1935.

In German politics, the French occupation of the Rhineland accelerated the formation of right-wing parties. Disoriented by the defeat in the war, conservatives in 1922 founded a consortium of nationalist associations, the "Vereinigten Vaterländischen Verbände Deutschlands" (VVVD). The goal was to forge a united front of the right. In the climate of national resistance against the French Ruhr invasion, the VVVD reached its peak strength. It advocated policies of uncompromising monarchism, corporatism, and opposition to the Versailles settlement. However, it lacked internal unity and money, so it never managed to unite the right and it faded away by the late 1920s, as the Nazis emerged.[26]