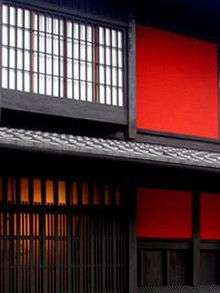 Entrance to Ichiriki Chaya, one of the most famous tea houses where geisha entertain in Gion

In Japan, an ochaya (お茶屋, literally "tea house") is an establishment where patrons are entertained by geisha. Ochaya are located in geisha districts (花街, hanamachi), and are today most numerous in Kyoto, though they can be found in geisha districts in other cities, such as Tokyo.

Ochaya, where geisha entertain, should be distinguished from okiya (boarding house), where geisha live – these may both be loosely translated as "geisha house." Geisha are attached to a single boarding house (where they do not entertain), and entertain at various ochaya or other venues from night to night. This arrangement originally developed in the yūkaku, or pleasure quarters, where oiran below the rank of tayū or kōshi could be summoned to entertain guests at ochaya.[1]

Though the term "ochaya" literally means "tea house", they do not serve tea, except incidentally (as an ordinary beverage); buildings or rooms for Japanese tea ceremony are instead known as chashitsu (茶室, literally "tea room"). When used as part of a name, the honorific prefix o- is not used in Japanese, and the plain "chaya" is used as a suffix, as in "Ichiriki Chaya". In English this is not always observed, and terminology such as "Ichiriki Ochaya" is sometimes used. Ochaya are often referred to instead simply by their name, as in "(the) Ichiriki". 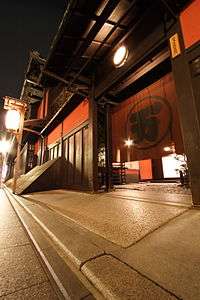 Ochaya are typically very exclusive establishments – with very rare exceptions, one may only enter if one is an established patron, or accompanied by a patron, with reservations.[2]

Relationships to ochaya can often be traced back generations, and are generally associated with a family or company. Switching ochaya is not generally possible, and even patronizing ochaya other than the one with which one is associated is considered a very serious breach of manners.

In exceptional circumstances, these restrictions are relaxed. For example, for a brief period of only a few nights in 2006, one ochaya in each of the five Kyoto geisha districts offered general access to a small number of tourists who were unaccompanied by patrons, as part of a tourism promotion program, at the request of the Kyoto City Tourist Association.[3]

Ochaya cater to a discreet clientele, and thus do not present a particularly conspicuous front, but nor are they particularly secretive as to their location. Ochaya are generally located on or near the main streets of their geisha district, and will generally have the name at the entrance, with an entrance curtain (暖簾, noren) and front garden in larger houses, which can be glimpsed from the street. In Kyoto, ochaya are licensed by the city, and all display a metal badge at the entrance reading 「京公許第〜号」「お茶屋」 (Kyoto public license #..., Ochaya).

The main function of an ochaya is to provide a private space for entertainment by a geisha (including an apprentice maiko). Geishas are not affiliated with a particular house, but are instead hired from a geisha house (okiya) to provide entertainment, consisting of conversation, flirtation, pouring drinks, traditional games, singing, musical instruments, and dancing.[2] Ochaya typically do not prepare food, but customers can order catering a la carte, which is delivered to the house; geisha districts typically have a variety of restaurants serving this trade.[4]

The most notable and famous ochaya is Ichiriki Chaya, in the Gion district of Kyoto, which is considered the height of exclusivity, and features as a major setting in Arthur Golden’s fictional portrayal of a Gion Geisha's life, Memoirs of a Geisha.