For the film adaptations of this novel, see Of Human Bondage (film).

Of Human Bondage (1915) is a novel by W. Somerset Maugham. It is generally agreed to be his masterpiece and to be strongly autobiographical in nature, although Maugham stated, "This is a novel, not an autobiography, though much in it is autobiographical, more is pure invention."[1] Maugham, who had originally planned to call his novel Beauty from Ashes, finally settled on a title taken from a section of Spinoza's Ethics.[2] The Modern Library ranked Of Human Bondage No. 66 on its list of the 100 best English-language novels of the 20th century.

The book begins with the death of Helen Carey, the much beloved mother of nine-year-old Philip Carey. Philip has a club foot and his father had died a few months before. Now orphaned, he is sent to live with his aunt Louisa and uncle William Carey.

Early chapters relate Philip's experiences at his uncle's vicarage. Aunt Louisa tries to be a mother to Philip, but his uncle takes a cold disposition towards him. Philip's uncle has a vast collection of books, and Philip enjoys reading to find ways to escape his mundane existence. Less than a year later, Philip is sent to a boarding school. His uncle and aunt wish for him to eventually attend Oxford. Philip's disability and sensitive nature make it difficult for him to fit in with the other students. Philip is informed that he could have earned a scholarship for Oxford, which both his uncle and school headmaster see as a wise course, but Philip insists on going to Germany.

In Germany, Philip lives at a boarding house with other foreigners. He enjoys his stay in Germany. Philip's guardians decide to take matters into their own hands and they persuade him to move to London to take up an apprenticeship. He does not fare well there as his co-workers resent him, because they believe he is a "gentleman". He goes on a business trip with one of his managers to Paris and is inspired by the trip to study art in France. In France, Philip attends art classes and makes new friends, including Fanny Price, a poor and determined but talentless art student who does not get along well with people. Fanny Price falls in love with Philip, but he does not know and has no such feelings for her; she subsequently commits suicide. 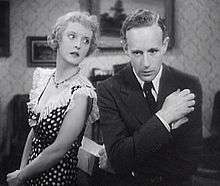 Bette Davis and Leslie Howard in the 1934 film version

Philip realizes that he will never be a professional artist. He returns to his uncle's house in England to study medicine and pursue his late father's field. He struggles at medical school and comes across Mildred, who is working as a waitress in a tea shop. He falls desperately in love with her, and they date regularly, although she does not show any affection for him. Mildred tells Philip she is getting married to another man, leaving him heartbroken; Philip subsequently enters into an affair with Norah Nesbit, a kind and sensitive author of penny romance novels. Later Mildred returns, pregnant, and confesses that the man for whom she had abandoned Philip never married her.

Philip breaks off his relationship with Norah and supports Mildred financially, though he can ill afford to do so. To Philip's dismay, after Mildred has her baby she falls in love with his good friend Harry Griffiths, and runs away with him. About a year later, Philip runs into Mildred again and, feeling sympathy for her, takes her in again. Though he no longer loves her, he becomes attached to her baby. When he rejects her advances, she becomes angry with him, destroys most of his belongings, and leaves forever. In shame, and quickly running out of money, Philip leaves the house for good. He meets Mildred once more towards the end of the novel, when she summons him for his medical opinion. As she is probably suffering from syphilis resulting from her work as a prostitute, Philip advises Mildred to give up this life. Mildred declines and exits from the plot, her fate remaining unknown.

While working at a hospital, Philip befriends family man, Thorpe Athelny. Athelny has lived in Toledo, Spain. Enthusiastic about the country, he is translating the works of St. John of the Cross. Meanwhile, Philip invests in mines but is left nearly penniless because of events surrounding the Boer War. Unable to pay his rent, he wanders the streets for several days before the Athelnys take him in and find him a department store job, which he hates. His talent for drawing is discovered and he receives a promotion and a raise in salary, but his time at the store is short-lived. After his uncle William dies, Philip inherits enough money to allow him to finish his medical studies and he finally becomes a licensed doctor. Philip takes on a temporary placement at a hospital with Dr. South, an old, cantankerous physician whose wife is dead and whose daughter has broken off contact with him. However, Dr. South takes a shine to Philip's humour and personable nature, eventually offering Philip a partnership in his medical practice. Although flattered, Philip refuses because of his plans to visit Spain.

He soon goes on a small summer vacation with the Athelnys, hop-picking in the Kent countryside. There he finds that one of Athelny's daughters, Sally, likes him. In a moment of romantic abandon one evening they have sex, and when she thinks she is pregnant, Philip decides to marry Sally and accept Dr. South's offer, instead of traveling the world as he had planned. They meet in the National Gallery where, despite learning that it was a false alarm, Philip becomes engaged to Sally, concluding that "the simplest pattern, that in which a man was born, worked, married, had children, and died, was likewise the most perfect." He stops searching for happiness and decides to be content with his lot.

Maugham had borrowed the title of his book from Spinoza. Part IV of his Ethics is titled "Of Human Bondage, or the Strength of the Emotions". In this part, Spinoza discusses people's inability to control their emotions which, thus, constitute bondage. He also defines good and bad categories basing on the people’s general beliefs, connecting it to their “emotions of pleasure or pain”. He defines perfectness/imperfectness starting out from the desire, in its meaning of particular aims and plans. Philip Carey, the main character of Of Human Bondage, was seeking this very useful end, and became satisfied only after realizing what his aim had been, and having found a person to share this aim with.

Maugham had a stammer (instead of a club foot), lost his mother early and was sent to his aunt and uncle, studied medicine, and his literature tastes coincide with ones of the main character. Although Maugham had never been an artist, he was rather interested in it. The writer possessed in his private collection works of four painters mentioned in the book: Pissarro, Sisley, Monet and Renoir. In the Summing Up, we get to know that he read Ruskin and became acquainted with plenty of European art pieces. A lot of his other works are much focused on this field: The Moon and Sixpence (main character possesses some resemblance with Paul Gauguin), he wrote an article for Life Magazine's “Painting I Have Liked”. Of Human Bondage is, probably, the most vivid instance of the Maugham inclination towards arts. According to Stanley Archer, the book names more than thirty artists, 10 famous paintings by name and refers to many others: "Of the thirty-three artists named in the novel, over half were painters whose careers were primarily nineteenth century. Thirteen of these were French, five were English, Whistler is the only American artist named. Eleven were living at the time of the plot, and five – Carolus-Duran, Degas, Monet, Rafelli and Renoir – were living when Of Human Bondage was published in 1915".[3]