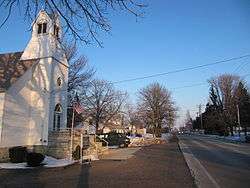 SR 582 passes through the northern half of Wood County and a small portion of northwestern Sandusky County along its way. No part of SR 582 is incorporated within the National Highway System, a system of routes determined to be most important for the nation's economy, mobility and defense.[4]

SR 582 was established in 1940. Its original routing matches that which it utilizes to this day between SR 65 and SR 105 through northern Wood County and northwestern Sandusky County. SR 582 has not experienced any significant changes since its inception.[2][3]

Template:Attached KML/Ohio State Route 582
KML is from Wikidata
This article is issued from Wikipedia - version of the 5/21/2016. The text is available under the Creative Commons Attribution/Share Alike but additional terms may apply for the media files.