Wilson was born in Mansfield, England, where his golfing career began at Coxmoor Golf Club, having been a junior at Oakmere Park Golf Club.

In his rookie season on the European Tour in 2005, Wilson had three top ten finishes. In 2006 he lost in a play-off to Paul Casey at the Volvo China Open and in 2007 he had two second-place finishes. Wilson finished second four times in 2008, one of which took place at the BMW PGA Championship where he lost in a play-off to Miguel Ángel Jiménez. In April of that year Wilson reached the top 100 of the Official World Golf Ranking for the first time, the next month after his runner-up spot at the PGA Championship he reached a new high position of 45.

Also in 2008, Wilson qualified for that year's Ryder Cup matches.[1]

In the opening tournament of the 2009 Race to Dubai, the HSBC Champions, Wilson recorded yet another runner-up finish. On March 15, 2009, he recorded a top-5 finish in the WGC-CA Championship. Wilson was also runner-up at the 2009 Alfred Dunhill Links Championship.

Wilson never finished higher than 5th in 2010, although he still finished in the top 50 of the Order of Merit. Wilson lost his full European Tour playing rights at the end of the 2011 season. He alternated between the European Tour and the Challenge Tour in 2012, but failed to regain his full playing rights through his play during the year or at the 2012 qualifying school. 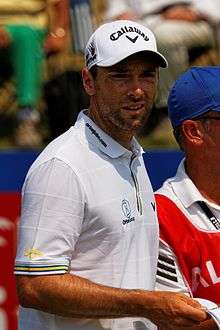