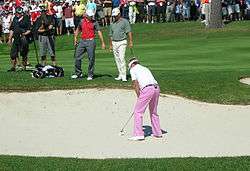 Ian James Poulter (born 10 January 1976) is an English professional golfer who is a member of the world's top two professional golf tours, the U.S.-based PGA Tour and the European Tour. He has previously been ranked as high as number 5 in the world rankings. The highlights of Poulter's career to date have been his two World Golf Championship wins at the 2010 WGC-Accenture Match Play Championship and the 2012 WGC-HSBC Champions. He is the touring professional for Woburn Golf and Country Club.[1]

Born in Hitchin, Poulter took up the game at the age of four when his single-handicap father, Terry, gave him a cut-down 3-wood. His older brother Danny is also a professional golfer.[2] Unable to get a place as a pro at a private club, he became the assistant pro and golf shop manager at the Chesfield Downs Golf Club.[3] There he was forced by his boss to pay a full green fee every time he wanted to play in a competition. His handicap hence stayed at four, because he did not play in competitions. Following this period, Poulter joined as Assistant Pro at Leighton Buzzard golf course, giving lessons to youngsters at £1 a time.[4]

Poulter turned professional in 1996 gaining his first win at the 1999 Open de Côte d'Ivoire on the European Tour's second tier Challenge Tour. He won promotion to the European Tour itself via the qualifying school later that year.

After narrowly missing a place in the 2002 European Ryder Cup team, Poulter was a member of the victorious squad in 2004, where he officially scored the winning points for his team.[5] This entitled him to take up membership of the PGA Tour in 2005, and he has divided his time between the two tours since then.

At the 2008 Masters Tournament, Poulter made a hole-in-one at the 16th hole at Augusta National in the first round. At the 2008 Open Championship, Poulter had the clubhouse lead on the last round before being beaten by defending champion Pádraig Harrington. In the 2008 Ryder Cup, Poulter was the highest points scorer on either side as he scored 4 of Europe's 11.5 points. Europe lost the Ryder Cup 16.5–11.5.

In the 2009 Players Championship, he finished in sole possession of second place at eight under-par, four shots behind the winner, Henrik Stenson. In November 2009, Poulter won the Barclays Singapore Open at the Sentosa Club.[6] He moved into the top-10 of the Official World Golf Ranking in January 2010 with a second-place finish at the Abu Dhabi Golf Championship.[7]

In February 2010, he won his first tournament on U.S. soil, beating fellow Englishman Paul Casey 4&2 in the final of the WGC-Accenture Match Play Championship in Arizona.[8] The win moved him to 5th in the world rankings.[9] His ranking gained Poulter a place in the 2010 Ryder Cup in September at Celtic Manor in Wales He won 3 points in the 4 matches he played in the European team's win by 14.5 points to 13.5. In November 2010, he won his second title of the year with a one-stroke victory in the UBS Hong Kong Open.[10]

On 23 February 2011, in Marana, Arizona, Poulter became the first defending champion in nine years to be eliminated in the first round of the WGC-Accenture Match Play Championship. He did however enjoy greater success in the European Tour's own match play event, the Volvo World Match Play Championship where he won the title beating Ryder Cup teammate Luke Donald, 2&1, in the final. He had previously beaten the world number one Lee Westwood, Francesco Molinari and Nicolas Colsaerts to get to the final. This was Poulter's second tournament win in a match play event and eleventh European Tour victory.[11] As a result of his win Poulter moved up from 22nd to 14th in the Official World Golf Ranking. .

Poulter was one of José María Olazábal's two "captains picks" for the European Team at the 2012 Ryder Cup. He won all the 4 matches he played over the three days of the event, and was a key figure in sparking his team's victory by 14.5 points to 13.5.[12]

On 4 November 2012, Poulter won the second World Golf Championship of his career at the WGC-HSBC Champions in Shenzhen, China, coming from four strokes back in the final round to win by two from four other players. He shot a final round of 65 which included 8 birdies in his first 15 holes to seize control and despite a late bogey, closed out the victory by two strokes. He became only the second European to have won multiple WGC events after Darren Clarke. The victory took Poulter to 15th in the rankings.[13]

At the 2015 Honda Classic on the PGA Tour, Poulter had a three shot lead going into the final round of the rain delayed event. However he had a disastrous four-over-par final round of 74, where he found the water five times, included twice on the 14th hole which cost him a triple bogey. Poulter would finish in a tie for third, one shot outside of the playoff, which was won by Pádraig Harrington. It was his first 54-hole lead on the PGA Tour and he still to date has never won a non-WGC PGA Tour event. In the same year, Poulter was in a predicament. He fell to 51st in the OWGR and was not exempt for the WGC-HSBC Champions, and had failed to enter the UBS Hong Kong Open. He was also at risk of losing his European Tour card since he had only played in 12 events, one short of membership and Ryder Cup eligibility. He only earned entry to the Hong Kong Open after Rich Beem gave up his sponsor exemption to allow Poulter to compete.[14]

In March 2016, Poulter held the 54-hole lead at the Puerto Rico Open, an alternate event on the PGA Tour. He led by one stroke entering the final round, but shot an even-par round which included just the one birdie, to finish in a tie for third, one stroke outside of the playoff. This was only the second time that Poulter had held a 54-hole lead in an event on the PGA Tour and he has yet to win one. The result was however his best on tour for over a year.

On 3 June 2016, Poulter was ruled out of the upcoming Ryder Cup after being sidelined for four months with a foot injury.[15] Only three days later, he was named by captain Darren Clarke as one of his vice-captains for the match.[16] Poulter will play the 2016-17 season using a Major Medical Extension.

Poulter is well known for his eccentric dress sense, inspired by his mother who managed the Letchworth branch of UK women's fashion chain Dorothy Perkins.[3] His most famous pieces include trousers featuring the famous Claret Jug, worn at both the 2005 and 2006 Open Championships. Commentating for the BBC, Seve Ballesteros jibed that this was "the closest [Poulter] would ever get to it".

He is an avid fan of football club Arsenal.[17][18] He has on several occasions appeared with the team's crest on his shoes, and he even controversially wore the team's shirt during an event, gaining widespread ire for flying in the face of golfing tradition (immediately after the event the rule was changed to stop future players wearing football jerseys). In addition to his golfing career, Poulter launched Ian Poulter Design (IJP Design) in 2007.[19]

In the March issue of Golf World (UK) in 2008, Poulter was quoted saying "Don't get me wrong, I really respect every professional golfer, but I know I haven't played to my full potential and when that happens, it will be just me and Tiger."[20]

Following the European Team's loss in the 2008 Ryder Cup, Poulter accused Anthony Kim, who was on the American team, of body checking him in the middle of a match, which Kim denied and said it was an accident.[21]

In April 2010, Poulter was strongly rebuked for using an anti-Semitic nickname for Tottenham Hotspur fans in one of his Twitter posts. He has since apologised.[22]

In October 2010, Poulter tweeted videos of him with the Ryder Cup trophy at his Florida home, including a video of him and his children eating cereal out of the trophy sparking controversy.[23]

In March 2014, Poulter called Japanese first-year pro Hideki Matsuyama an "idiot" on Twitter during the WGC-Cadillac Championship. Matsuyama had accidentally damaged the 13th green while putting during treacherous conditions. Poulter claimed that Matsuyama failed to repair it himself. Matsuyama later apologized directly to Poulter.[24]

In October 2014, PGA of America president Ted Bishop responded to Poulter's criticism of the Ryder Cup captaincy of Nick Faldo and Tom Watson by calling Poulter a "lil girl", which led to Bishop's firing. The PGA called Bishop's statements "unacceptable" and "insensitive gender-based".[25][26]

Poulter is married to Katie; the couple have four children, and live in Lake Nona Golf & Country Club in Orlando, Florida.[27] The couple also have a home in Milton Keynes, Buckinghamshire.[28]

Poulter is an avid car collector, and along with his 2008 purchase of a Ford GT,[29] he has a Bentley Continental GT, a Ferrari California, and has owned a Ferrari, Nissan Skyline and an Aston Martin DB9. As of August 2015, Poulter has 2 million followers on Twitter, which is the second most on the PGA Tour to Tiger Woods with 4.7 million followers.

1 Co-sanctioned by the Asian Tour

DNP = did not play CUT = missed the half way cut WD = withdrew "T" indicates a tie for a place. Yellow background for top-10.