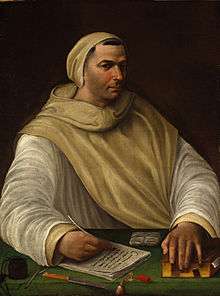 The Olivetans, or the Order of Our Lady of Mount Olivet, are a monastic order formally recognised in 1344. They have formed the Olivetan Congregation within the Benedictine Confederation since 1960.

The Order of Our Lady of Mount Olivet is a small Roman Catholic order, founded in 1313 by Bernardo Tolomei (born Giovanni Tolomei) along with two of his friends from the noble families of Siena, Patrizio Patrizi and Ambrogio Piccolomini. They initially lived as hermits in the "savage waste of Accona". The building of the monastery here began with the approbation of the foundation charter by Guido Tarlati, bishop of Arezzo (26 March 1319).

After the arrival of a number of new followers, the nascent community adopted the Rule of St. Benedict and was recognised by Pope Clement VI in 1344.

Despite modern myths surrounding the prophesies attributed to Catholic mystic Saint Malachy (but which critics see as a c1590 forgery), there is no connection between the Olivetan Order and the Pope elected in 2005, Benedict XVI (supposedly the second-last Pope, 'Glory of the Olive', according to the prophesies). While it is true that the Olivetan congregation is considered a branch of the Benedictine order, the same can be said of the many other monastic congregations that follow the Rule of St. Benedict.

The Olivetan monks rule Bec Abbey in France, as well as other houses in England, USA, Italy (including San Miniato al Monte in Florence), Brazil, Guatemala, Israel and South Korea.