Ally Detroit Center (Formerly One Detroit Center) is a skyscraper and class-A office building located downtown which overlooks the Detroit Financial District. Rising 619 feet (189 m), the 43-story tower is the tallest office building in Michigan, and the second tallest building overall in the state behind the central hotel tower of the Renaissance Center, located a few blocks away. Although the Penobscot Building has more floors (45 above-ground floors compared to 43), Ally Detroit Center's floors are taller, with its roof sitting roughly 60 feet (18 m) taller than Penobscot's. Its floor area is 1,674,708 sq ft (155,585.5 m2). 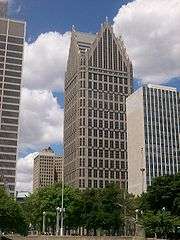 The building was designed by noted architects John Burgee & Philip Johnson, partners influential in postmodern architecture.[5] Ally Detroit Center was constructed from 1991 to 1993. It houses numerous tenants, including many prominent Detroit law firms, and other banks. In addition to retail, the building also contains a restaurant.

The building is famous for its postmodern architectural design topped with Flemish-inspired neo-gothic spires which blend architecturally with the city's historic skyline.[5] It is constructed mainly of granite. Sometimes called a "twin gothic structure", for its pairs of spires, it is oriented North-South and East-West (as named on a plaque along the Windsor waterfront park). Ally Detroit Center won an Award of Excellence for its design in 1996. Ally Detroit Center replicas have become a souvenir item along with those of other Detroit skyscrapers.[6]

The law firm Dickinson Wright (formerly Dickinson, Wright, Moon, Van Dusen & Freeman) has its headquarters in Ally Detroit Center.[9][10] The company moved into the building when it opened in 1992.[11] In 2007 the company had almost 100,000 square feet (9,300 m2) of space in the building. That year it renewed its lease.[10] Additionally, the law firm of Clark Hill, PLC rents three floors in the building.

The building has been occupied by Comerica Bank. In efforts to expand its U.S. presence, the bank has engaged in a succession of takeovers in Texas, Florida, Arizona, and California. The bank's lease on Comerica Tower at Detroit Center ran through 2012.[12] Comerica is a major sponsor of Comerica Park, the home of the Detroit Tigers baseball team. In December 2009, tenant Comerica announced it would vacate Ally Detroit Center by 2012, consolidating its Michigan operations at 411 West Lafayette Boulevard.[13]

In March 2015, following the purchase of the building by Dan Gilbert, and Bedrock Real Estate Services, it was announced that Ally Financial will move its main office into the building from the nearby Renaissance Center as well as move all employees in suburban Detroit to the building, occupying 13 floors. The tower was renamed Ally Detroit Center.[14]

Pulse Fitness Training has been a tenant since 2013, was remodeled and re opened in March 2016. The expansion includes an additional 7,000 sq feet, totally 12,000 sq feet. This includes 8 showers, full group training studio, a variety of plate loaded equipment with 25,000lbs of free weights, selectorized and cardio machines available. With additional amenities that include showers, shake bar and personal training for your convenience.