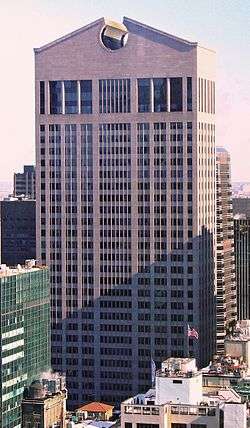 John Burgee (born August 28, 1933) is an American architect noted for his contributions to Postmodern architecture. He was a partner of Philip Johnson from 1967[1] to 1991, creating together the partnership firm Johnson/Burgee Architects. Their landmark collaborations included Pennzoil Place in Houston and the AT&T World Headquarters in New York. Burgee eased Johnson out of the firm in 1991, and when it subsequently went bankrupt, Burgee's design career was essentially over.[1] Burgee is retired, and resides in California.[2]

Burgee graduated from the School of Architecture at the University of Notre Dame in 1956, and served on the university's Board of Trustees from 1988 until 2006, when he was named trustee emeritus, and on the School of Architecture's Advisory Council from 1982. He also served on the boards of the Architectural League of New York, Lenox Hill Hospital, Columbia University's Master of Sciences Program in Real Estate Development, the Parsons School of Design, and the Friends of the Upper East Side Historic District, and was the co-chairman of the Architectural Committee of the Statue of Liberty/Ellis Island Centennial Commission. For the Institute for Architecture and Urban Studies, Burgee was president and chairman.[3] 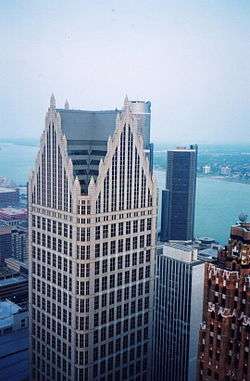 John Burgee and Philip Johnson established Johnson/Burgee in Manhattan in 1968, with Burgee as the firm's CEO, and they collaborated on many designs. In 1984, Raj Ahuja, who had been an associate with the firm for 15 years, was made a full partner. Two years later, they moved into the Lipstick Building at 885 Third Avenue, between 53rd and 54th Streets, which the firm had designed. That same year, Burgee negotiated a lesser role in the partnership for Johnson, as a design consultant, and in 1988 he asked Ahuja to leave. Completing the transformation of the firm, in 1991 Johnson left altogether, at Burgee's behest. Shortly thereafter, the firm went into bankruptcy because of an arbitration connected to Ahuja's leaving, and Burgee's career was dealt a serious blow.[1][2]