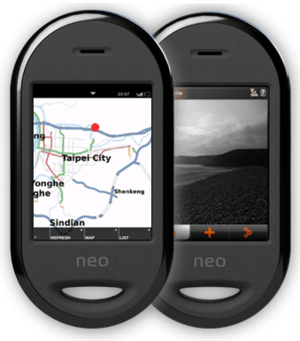 Openmoko was a project to create a family of open source mobile phones, including the hardware specification, the operating system (Openmoko Linux), and actual smartphone development implementation like the Neo 1973 and Neo FreeRunner.[1] The whole project was sponsored by Openmoko Inc.

The second sub-project was developing hardware devices on which Openmoko Linux runs. The first device released was the Neo 1973,[2][3] in 2007, which was followed up by the Neo FreeRunner on 25 June 2008.[4] On 2 April 2009, Openmoko suspended development of their third device, codenamed GTA03, to focus on the FreeRunner.[5][6] In 2010, development of the GTA03 was continued by Golden Delicious Computers under the new codename GTA04, which includes major hardware revision, and the first unit was shipped on 10 October 2011.[7] Unlike most other mobile phone platforms, these phones are designed to provide end users with the ability to modify the operating system and software stack. Other Openmoko-supported phones are also available.[8]

The name Openmoko is an initialism for Open Mobile Kommunikations.[11]

The codename for the phone product series, GTA, is an abbreviation of "GSM-TI-AGPS" which indicates the main components of the phone.[12]

Originally Openmoko Inc. developed its own operating system for the phones, which was called Openmoko Linux or Om. It uses the Linux kernel, together with a graphical user environment built using the X.Org Server. The OpenEmbedded build framework and opkg package system were used to create and maintain software packages. The initial version named Om 2007 used the GTK+ toolkit and the Matchbox window manager. Om 2008, which was released in August 2008, added support for the Qt toolkit and Enlightenment 17. Despite continuous improvements both of these versions did not reach a stable state. As a result, Openmoko started developing Om 2009, which had the goal of providing a stable environment based on the middleware from freesmartphone.org, a project that was financed by Openmoko. However, this version was not finished either, and in April 2009 Openmoko cancelled the development of software.

This task was taken over by a several efforts of the community. Several groups have created modified versions of the original software or ported other systems to work on the phones. Among others, the Openmoko phones now support Android, Debian, Gentoo, Qt Extended Improved, QtMoko, and SHR.

the Neo 1973, the first smartphone using the Openmoko software

Openmoko hardware aspires to the term open-source hardware although in various areas the availability of cell phone components and legal requirements prevent full conformance to this term.

As do many other vendors, Openmoko Inc., notoriously failed to meet the publicly announced hardware release dates, and postponed releases many times.

The first supported phone, the Neo 1973 GTA01 (version: Bv4), was distributed exclusively through openmoko.com from July 2007 to February 2008.

The second revision of hardware based on the GTA01 design is the Dash Express, an automotive navigation system. The Dash Express has a faster CPU (Samsung 2440) and Wi-Fi ability.

The third hardware platform, the Neo FreeRunner codenamed GTA02 is an improved version of the Neo 1973.

The Neo 1973 (codenamed GTA01) phone was a "developers only" release. This phone supports the 900 MHz, 1800 MHz and 1900 MHz GSM frequency bands. Many Linux and unix programs used on desktop and server platforms, including utilities and games, have been successfully run on the phone. In addition to Linux, the NetBSD, FreeBSD and L4 kernels have been adapted by users to run on the platform or are under development.

This hardware platform can be emulated in software with a high level of compatibility using a version of QEMU included in the Openmoko software suite.

There is a lack of reference material for what happened to the GTA03 (codename of 3D7K). Openmoko built 3 working prototypes which had capacitive touchscreens and a fully transparent curved case .

The latest product from Openmoko Inc. was the WikiReader, a device to read Wikipedia articles offline.[14]

With those specifications and the 512MB RAM combined with 512MB NAND Flash and 32GB expandable microSDHC, it would have been similar in performance to the iPhone 4 and iPhone 4S.[15][16] 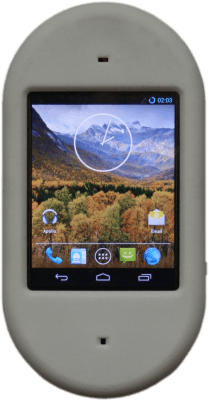 This was a release of the Openmoko Beagle Hybrid, a platform using the Beagle Board as a basis for developing and prototyping a next generation Openmoko phone.[17] The following month, Golden Delicious stated their long-term goal of bringing such a phone to market.[18] The new GTA04 board fit into the Neo Freerunner case and connected to the existing display and other components.[19] The first batch of GTA04A3 EA (early adopter) started shipping on 10 October 2011.[20] Version GTA04A4 first batch started shipping on 31 January 2012.[21] The design for the next revision, GTA04A5, contained some minor but relevant upgrades in design and parts, and replacement of end-of-life components. The production was crowd funded.[22]

It is also possible to order a ready made phone called OpenPhoenux or GTA04 Complete.[23]