X.Org Server is the free and open source implementation of the display server for the X Window System stewarded by the X.Org Foundation.

Implementations of the client side of the protocol are available e.g. in the form of Xlib and XCB.

The services with which the X.Org Foundation supports X Server include the packaging of the releases; certification (for a fee); evaluation of improvements to the code; developing the web site, and handling the distribution of monetary donations. The releases are coded, documented, and packaged by global developers.

The X.Org Server implements the server side of the X Window System core protocol and extensions to it, e.g. RandR.[4]

The Device Independent X (DIX) is the part of the X.Org Server that interacts with clients and implements software rendering. Basically everything in the server except for the hw/ directory. The main loop and the event delivery are part of the DIX.[6]

An X server has a tremendous amount of functionality that you must support to claim to speak the X core protocol. This includes code tables, glyph rasterization and caching, XLFDs, and the entire core rendering API that lets you draw stippled lines, polygons, wide arcs and many more state-of-the-1980s style graphics primitives.

The Device Dependent X (DDX) is the part of the x-server that interacts with the hardware. In the X.Org Server source code, each directory under "hw" corresponds to one DDX. Hardware comprises graphics cards as well as mouse and keyboards. Each driver is hardware specific and implemented as a separate loadable module.

In Debian the 2D graphics drivers for the X.Org Server are packaged individually and called xserver-xorg-video-*.[7] After installation the 2D graphics driver-file is found under /usr/lib/xorg/modules/drivers/. The package xserver-xorg-video-nouveau installs nouveau_drv.so with a size of 215 KiB, the proprietary Nvidia GeForce driver installs a 8 MiB-sized file called nvidia_drv.so and Radeon Software installs fglrx_drv.so with a size of about 25MiB.

The available free and open-source graphics device drivers are being developed inside of the Mesa 3D-project. While these can be recompiled as required, the development of the proprietary DDX 2D graphics drivers is greatly eased when the X.Org Server keeps a stable API/ABI across multiple of its versions.

On April 7, 2016 AMD employee Michel Dänzer released xf86-video-ati version 7.7.0[8] and xf86-video-amdgpu version 1.1.0,[9] the later including support for their Polaris microarchitecture. 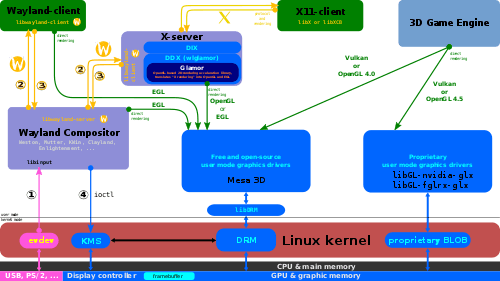 Glamor is a generic, i.e. hardware independent, 2D acceleration driver for the X server that translates the X render primitives to OpenGL operations, taking advantage of any existing 3D OpenGL drivers (proprietary or otherwise).[10] In this way, it is functionally similar to Quartz Extreme and QuartzGL (2D performance acceleration) for Apple Quartz Compositor.

The ultimate goal of GLAMOR is to obsolete and replace all the DDX 2D graphics device drivers and acceleration architectures, thereby avoiding the need to write X 2D specific drivers for every supported graphic chipset.[11][12][13] Glamor requires a 3D driver with support for shaders.[14]

Glamor performance tuning was accepted for Google Summer of Code 2014.[15] Glamor supports Xephyr and DRI3,[16] and can boost some operations by 700–800%.[17] Since its mainlining into version 1.16 of the X.Org Server, development on Glamor was continued and patches for the 1.17 release were published.[18]

With version 1.16, the X.Org Server obtained support for the libinput library in form of a wrapper called xf86-input-libinput.[19] At the XDC 2015 in Toronto, libratbag was introduced as a generic library to support configurable mice.[20][21] xserver-xorg-input-joystick is the input module for the X.Org server to handle classic joysticks and gamepads, which is not meant for playing games under X, but to control the cursor with a joystick or gamepad.[22][23]

XWayland is a series of patches over the X.Org server codebase that implements an X server running upon the Wayland protocol. The patches are developed and maintained by the Wayland developers for compatibility with X11 applications during the transition to Wayland,[24] and was mainlined in version 1.16 of the X.Org Server in 2014.[5] When you want to run an X application from within Weston, it spins up XWayland to service the request.[25]

XQuartz is a series of patches from Apple Inc. to integrate support for the X11 protocol into their Quartz Compositor, in a similar way to how XWayland integrates X11 into Wayland compositors.

There is a device driver for the X.Org Server called Xspice. It supports the QXL framebuffer device and includes a wrapper script[26] which makes it possible to launch an X.Org Server whose display is exported via the SPICE protocol. This enables use of SPICE in a remote desktop environment, without requiring KVM virtualization.

Xephyr is an X-on-X implementation. Since version 1.16.0, Xephyr serves as the primary development environment for the new 2D acceleration subsystem (Glamor), permitting rapid development and testing on a single machine.[5]

The X.Org Server, and any x-client, each run as distinct processes. On Unix/Linux, a process knows nothing about any other processes. For it to communicate with another process, it is completely and utterly reliant on the kernel to moderate the communication via available inter-process communication (IPC) mechanisms. Unix domain sockets are used to communicate with processes running on the same machine. Special socket function calls are part of the System Call Interface. Although Internet domain sockets can be used locally Unix domain sockets are more efficient, since they do not have the protocol overhead (checksums, byte orders, etc.).

X.Org Server does not use D-Bus.

Sockets is the most common interprocess communication (IPC) method between the processes of the X server and its various X clients. It provides the Application Programming Interface (API) for communication in the TCP/IP domain and also locally only in the UNIX domain. There are several other APIs described in the X Transport Interface, for instance TLI (Transport Layer Interface). Other options for IPC between for the X client-server, require X Window system extensions, for instance the MIT Shared Memory Extension (MIT-SHM).

Multi-seat refers to an assembly of a single computer with multiple "seats", allowing multiple users to sit down at the computer, log in, and use the computer at the same time independently. The computer has multiple keyboards, mice, and monitors attached to each, each "seat" having one keyboard, one mouse and one monitor assigned to it. A "seat" consists of all hardware devices assigned to a specific workplace. It consists of at least one graphics device (graphics card or just an output and the attached monitor) and a keyboard and a mouse. It can also include video cameras, sound cards and more.

Multiseat setups are great for schools, libraries, and family computers.

Due to limitation of the VT system in the Linux kernel and of the X core protocol (in particularly how X defines the relation between the root window and an output of the graphics card), multi-seat does not work out-of-the-box for the usual Linux distribution but necessitates a special configuration.

There are thee methods to configure a multi-seat assembly:

The utilized command-line options of the xorg-server are:

Only the user on the first monitor has the use of vt consoles and can use Ctrl+Alt+Fx to select them. The other users have a GDM login screen and can use xorg-server normally, but have no vt's.

Even though a single user can utilize multiple monitors connected to the different ports of a single graphics card (cf. RandR), the method which is based on multiple instances of the xorg-server seems to require multiple PCI graphics cards.

It is possible to configure multi-seat employing only one graphics card, but due to limitations of the X protocol this necessitates the usage of X Display Manager Control Protocol XDMCP.[27]

Unix and Linux
The X.Org Server runs on many free-software Unix-like operating systems; most Linux distributions and BSD variants have adopted it. It is also the X server for the Solaris operating system. Xorg is also available in the repositories of Minix 3

Microsoft Windows
Cygwin/X, Cygwin's implementation of the X server for Microsoft Windows, uses the X.Org Server, as do VcXsrv[28] (Visual C++ X-server[29]) and Xming. SSH clients such as PuTTY allow launching of X applications through X11 forwarding on the condition that it is enabled on both the server and client.

OS X
OS X versions prior to Mac OS X Leopard (10.5) shipped with an XFree86-based server, but 10.5's X server adopted the X.Org codebase.[30] Starting with OS X Mountain Lion, (10.7) X11 is not bundled in OS X; instead, it has to be installed from, for example, the open source XQuartz project.[31] As of version 2.7.4, X11.app/XQuartz does not expose support for high-resolution Retina displays to X11 apps, which run in pixel-doubled mode on high-resolution displays. 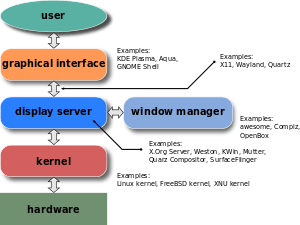 A display server, such as X.Org Server, implements the windowing system and serves its clients.

The modern X.Org Foundation came into being in 2004 when the body that oversaw X standards and published the official reference implementation joined forces with former XFree86 developers. X11R6.7.0, the first version of the X.Org Server, was forked from XFree86 4.4 RC2.[1] The immediate reason for the fork was a disagreement with the new license for the final release version of XFree86 4.4, but several disagreements among the contributors surfaced prior to the split. Many of the previous XFree86 developers have joined the X.Org Server project.

In 2005, a great effort was put in the modularization of the X.Org server source code,[32] resulting in a dual release by the end of the year. The X11R7.0.0 release added a new modular build system based on the GNU Autotools, while X11R6.9.0 kept the old imake build system, both releases sharing the same codebase. Since then the X11R6.9 branch is maintained frozen and all the ongoing development is done to the modular branch. The new build system also brought the use of dlloader standard dynamic linker to load plugins and drivers, deprecating the old own method. As a consequence of the modularization, the X11 binaries were moving out of their own /usr/X11R6 subdirectory tree and into the global /usr tree on many Unix systems.

In June 2006, another effort was done to move the X.Org server source codebase from CVS to git.[33] Both efforts had the long-term goal of bringing new developers to the project. In the words of Alan Coopersmith:[34]

In the 7.1 release, the KDrive framework (a small implementation of X written by Keith Packard, which was not based on XFree86 that X.Org developers used as a testing ground for new ideas, such as EXA) was integrated into the main codebase of X.Org server.

In 2008, the new DRI2, based on the kernel mode-setting (KMS) driver, replaced DRI. This change also set a major milestone in the X.Org server architecture, as the drivers were moved out from the server and user space (UMS) to the kernel space.

In 2013, the initial versions of DRI3 and Present extensions were written and coded by Keith Packard to provide a faster and tearing-free 2D rendering. By the end of the year the implementation of GLX was rewritten by Adam Jackson at Red Hat.[35]