Opposition to trade unions comes from a variety of groups in society and there are many different types of argument on which this opposition is based.

The economist Milton Friedman, Nobel Prize winner and advocate of laissez-faire capitalism, believed that unionization frequently produces higher wages at the expense of fewer jobs, and that, if some industries are unionized while others are not, wages will decline in non-unionized industries.[1]

By raising the price of labor, the wage rate, above the equilibrium price, unemployment rises. This is because it is no longer worthwhile for businesses to employ those laborers whose work is worth less than the minimum wage rate set by the unions.[2]

Trade unions often benefit insider workers, those having a secure job and high productivity, at the cost of outsider workers, consumers of the goods or services produced, and the shareholders of the unionized business. The ones who are likely to lose the most from a trade union are those who are unemployed or at the risk of unemployment or who are not able to get the job that they want in a particular field.[3]

Advocates of unions claim that the higher wages that unions demand can be paid for through company profits. However, as Milton Friedman pointed out, profits are only very rarely high enough. 80% of national income is wages, and only about 6% is profits after tax, providing very little room for higher wages, even if profits could be totally used up. Moreover, profits are invested leading to an increase in capital: which raises the value of labor, increasing wages. If profits were totally removed, this source of wage increase would be removed.[4]

By causing wage increases above the market rate, unions increase the cost to businesses, causing them to raise their prices, leading to a general increase in the price level.[6] Austrian economists such as Robert P. Murphy, however, dispute this, arguing that the increase in the cost of labor simply means that less of other goods can be bought. He writes:

If unions succeed in wage hikes, and employers raise the prices they charge consumers to maintain their own profit margins, and the supply of money remains the same, then something else has to "give." Either the prices of goods and services in nonunion sectors have to fall and offset the union sector hikes, or people's cash balances need to fall, in terms of their purchasing power.[7]

Some trade unions, such as the Teamsters, have been criticized for involvement with organized crime.[8]

The argument that unionized workers raise their own wages above their natural rate at the expense of their businesses or other workers assumes that unions never raise productivity to compensate for higher wages. Unions are capable of raising productivity by reducing turnover, by increasing coordination between workers and management, and by increasing workers' motivation.[9][10][11] Many unions raise the productivity of their workers, and some even raise it enough to make up for wage increases.[9]

Another argument raised by union supporters is that unionized workers will spend their higher wages, driving economic growth and creating new jobs.[12] Union opponents respond that this is an example of the broken window fallacy; union supporters assume that money is more valuable in the hands of unionized workers than in the hands of whoever else would obtain it in the union's absence. There is some evidence that this is not a fallacy, as greater wealth equality seems to be correlated with greater economic growth.[13] Union supporters counter that unions, if organized without violence or government help, are part of the free market; if unions can win higher wages for their workers without coercion, those wages are legitimate.[14]

Trade unions taken strike actions that result in the disruption of public services[15][16] – as demonstrated in the British Winter of Discontent.[17] However, where applicable, this may be logically inferred to be the very purpose of strike action per se.[18][19]

In some cases, unions' strike have led to violent clashes with police and with strikebreakers. See the article on the UK miners' strike of the 1980s.

Racist policies in the past

A consequence of unions' zeal to guard their special interests is that some unions have actively lobbied for racist and anti-immigration policies. An example is the creation of the notorious Asiatic Exclusion League, which was composed mainly of the various labor unions. The Pictorial History of American Labor observes,

The early A.F. of L. did not draw the color line, but expressed an "ideal of solidarity irrespective of race." Before long, however, the feeling changed. Whether a tendency to exclude black workers from craft unions was based more on fear of competition or racial prejudice carried over from slave days, it is difficult to decide. But the developing exclusion of the Negro worker from many neighbor unions brought with it serious problems—not just for the black worker seeking job security, but for the white worker seeking the same end... The record shows that black workers...have been used to break strikes. This availability has usually ended when the black worker has been shown that the union is open to black as well as white.[20]

However, in a study called The Black Worker, Spero and Harris observe that more strikes [in American labor history] have been broken by white workers than by black workers.[20] Most blacks were barred from membership in the AFL not because of their skin color, but because they never had a chance to learn a skill, and "most A.F. of L. unions did not admit unskilled mass-production workers."[21] While the AFL-CIO is the modern version of the AFL, it is much more open to membership by women, immigrants, and different nationalities. Other unions, such as the Industrial Workers of the World and the International Longshore and Warehouse Union, were created without regard to race from the very start.[22] 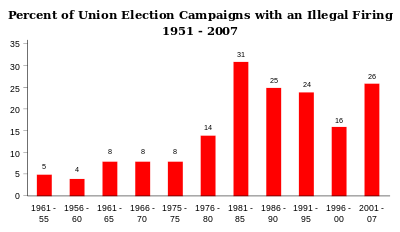 Illegal union firing increased during the Reagan administration and has continued since.[23]

Attempts to reduce the effects of trade unions may include union busting activities by private companies or state action including governments of authoritarian regimes such as in Adolf Hitler's Nazi Germany[24][25][26] and Burma's military dictator, Ne Win. Many democratic governments have also attempted to limit the effects of unions, although success has been mixed.

It has been argued, particularly by market anarchists, that government intervention in the economy has been decidedly anti-union, even in economies like the United States or the European Union. Kevin Carson maintains that the most effective union tactics are either criminalized or displaced by state policy in most countries. Trade unions established themselves through sitdown strikes, sympathy strikes, secondary boycotts, and hot cargo agreements; these tactics are all illegal in most industrialized countries. Similarly, the original unions doubled as social welfare organization, using union funds to provide healthcare and pensions to workers and welfare to the unemployed. By adopting various welfare-state measures, governments made the populace less dependent on unions.[14] 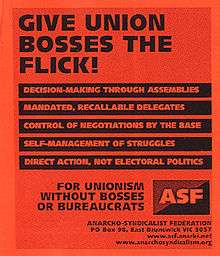 An anarcho-syndicalist flyer exhorting workers to "Give Union Bosses the Flick!"

The political left is often associated with support for trade unionism. However, some groups and individuals have taken a less positive view. In the nineteenth century, a belief in the iron law of wages led some socialists to reject trade unionism and strike action as ineffective. In this view, any increase in wages would lead manufacturers to raise prices leaving workers no better off in real terms. Karl Marx wrote a pamphlet, "Wages, Price and Profit", to counter this idea, which had been put forward in the International Workingmen's Association by a follower of Robert Owen.

Some early Social Democrats were also skeptical of trade unionism. Usual criticisms were that unions split workers into sections rather than organising them as a class; that they were dominated by relatively privileged skilled workers who were mainly concerned to defend their sectional interests; and that industrial action and organisation were incapable of bringing about fundamental social change. H. M. Hyndman of the Social Democratic Federation summed up some of these views when he wrote in The Historical Basis of Socialism in England (1883):

"Trade Unions ... constitute an aristocracy of labour who [are] ... a hindrance to that complete organisation of the proletariat which alone can obtain for the workers their proper control over their own labour ... Being also ... unsectarian and unpolitical, they prevent any organised attempt being made by the workers as a class to form a definite party of their own, apart from existing factions, with a view to dominate the social conditions – a victory which ... can only be gained by resolute political action."

Hyndman went on to urge workers to devote "the Trade Union funds wasted on strikes or petty funds" instead to the building up of a strong Socialist Party on the German model. Other social democrats however were more convinced than Hyndman of the utility of Trade Union action.

Trade unionism is criticised by those of council communist and left communist tendencies.[27] Here, trade unionism is seen as being more useful to capitalists than to workers, and as a kind of "safety-valve" that helps to keep working-class discontent within reformist channels and prevent it from evolving into revolutionary action. They think that a global state composed of workers' councils to be the ultimate union to where all workers in the world belong; unions that organize based on trade further divide the working class and act as a mechanism to allow the working class to vent concerns without actually uniting and becoming revolutionary. In contrast to other left critiques of trade unionism, these tendencies do not accept that the problems they identify could be remedied by changing the structure, leadership or objectives of trade unions. They argue that trade unionism is inherently reformist because it is sectarian and is not founded in the workplace itself and that revolutionary action is possible only if workers act outside trade unionism through workers' councils or other channels.

There is also a philosophical difference between the craft unionism of many AFL-type unions, and the industrial unionism of organizations such as the Industrial Workers of the World. Industrial unionists decry a practice that they call "union scabbing," in which craft unionists are required by the no-strike clause in their contracts to cross the picket lines of other unions.[28]

There is also the left critique of the tendencies of some labor unions to become bureaucratic and for the union leaders and staff to become detached from the needs and interests of the rank and file union members, in contrast to the practices of union democracy. The Labor Notes, in the United States, is an example of an organization that attempts to fight this bureaucratic tendency.