For other uses, see Otley (disambiguation).

Otley is a market town and civil parish at a bridging point on the River Wharfe in the City of Leeds metropolitan borough in West Yorkshire, England. Historically a part of the West Riding of Yorkshire, the population was 13,668 at the 2011 census. The town is in lower Wharfedale on the A660 which connects it to Leeds. The parish church (All Saints) has 7th-century origins.

Thomas Chippendale, the cabinetmaker, was born in the town and the painter J.M.W. Turner was a frequent visitor.

Otley's name is derived from Othe, Otho or Otta, a Saxon personal name and leah, a woodland clearing in Old English. It was recorded as Ottanlege in 972 and Otelai or Othelia in the Domesday Book of 1086.[2][3] The name Chevin has close parallels to the early Brythonic Welsh term Cefn meaning ridge and may be a survival of the ancient Cumbric language.

There are pre-historic settlement finds alongside both sides of the River Wharfe and it is believed the valley has been settled at this site since the Bronze Age. There are Bronze Age carvings on rocks situated on top of The Chevin, one such example is the Knotties stone. West Yorkshire Geology Trust has reference to Otley Chevin and Caley Crags having a rich history of human settlement stretching back into Palaeolithic times. Flint tools, Bronze Age rock carvings and Iron Age earthworks have been found. In medieval times the forest park was used as common pasture land, as a source of wood and sandstones for buildings and walls.

The majority of the early development of the town dates from Saxon times and was part of an extensive manor granted by King Athelstan to the see of York. The Archbishops of York had a residence and were lords of the manor. Their palace was located on the site occupied by the Manor House.[3] Otley is close to Leeds and may have formed part of the kingdom of Elmet. Remains of the Archbishop's Palace were found during the construction of St Joseph's School. The town grew in the first half of the 13th century when the archbishops laid out burgage plots to attract merchants and tradespeople. The burgage plots were on Boroughgate, Walkergate and Kirkgate. Bondgate was for tenants who did not have 'burgage' privileges. A leper hospital was founded on the road to Harewood beyond Cross Green.[4]

Documented history for the market begins in 1222 when King Henry III granted the first Royal Charter. The town had two cattle markets, Wharfedale Farmers' Auction Mart on East Chevin Road and the Bridge End Auction Mart which has closed and was subsequently demolished. Market days are Tuesday, Friday and Saturday, and there is a Farmers' Market on the last Sunday of every month.

Thomas Chippendale, the cabinetmaker, was born in a cottage at the junction of Boroughgate and Wesley Street[4] and his statue stands next to the old Grammar School that he once attended in Manor Square. J.M.W. Turner, the painter, visited Otley in 1797, aged 22, when commissioned to paint watercolours of the area. He was so attracted to Otley and the surrounding area that he returned time and time again. His friendship with Walter Ramsden Fawkes made him a regular visitor to Farnley Hall, two miles from Otley. The stormy backdrop of Hannibal Crossing The Alps is reputed to have been inspired by a storm over Otley's Chevin while Turner was staying at Farnley Hall. 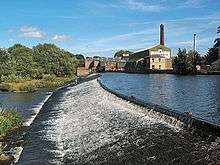 Weir on the River Wharfe at Otley

The woollen industry developed as a cottage industry but during the Industrial Revolution and the mechanisation of the textile industry, mills were built using water then steam power. A cotton mill and weaving shed for calicoes were built by the river in the late 18th century. Later woolcombing and worsted spinning were introduced.[4] By the mid 19th century 500 inhabitants were employed in two worsted-mills, a paper-mill, and other mills.[3] A tannery was established in the 19th century.[4]

The Wharfedale Printing Machine was developed in Otley by William Dawson and David Payne.[5] An early example can be seen in Otley Museum. By 1900 the printing machinery trade, with over 2,000 people employed in seven machine shops was Otley's most important industry.[4]

Historically Otley was a market-town and the centre of a large ecclesiastical parish in the wapentakes of Skyrack and Claro in the West Riding of Yorkshire. The various chapelries and townships in the ancient parish became separate civil parishes in 1866.[6] From 1894 Otley formed an Urban District, and in 1897 and 1903 expanded north of the River Wharfe to include Newall. Since local government reorganisation in 1974 Otley has been a civil parish in the metropolitan borough of the City of Leeds, in the county of West Yorkshire. The parish council has exercised its option to declare itself a town council. 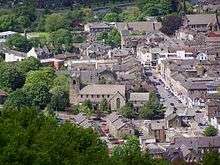 A view over Otley.

Otley lies 28 miles south-west of York, 10 miles north-west of Leeds, 10 miles north-east of Bradford, and 196 miles from London. The town lies in lower Wharfedale at a bridging point of the River Wharfe where there is a seven arched medieval bridge and is surrounded by arable farmland. The historic town developed on the south bank of the Wharfe, but in the 20th century Otley expanded north of the river, to include new developments at Newall and the Weston Estate.

The south side of the valley is dominated by a gritstone escarpment overlooking Otley called the Chevin and to the north is Newall Carr.[3] In 1944, Major Le G.G.W. Horton Fawkes of Farnley Hall donated 263 acres (1.1 km²) of land on the Chevin to the people of Otley. This has been expanded to 700 acres (2.8 km²) and constitutes Chevin Forest Park. It was from a quarry on the Chevin that the foundation stones for the Houses of Parliament were hewn.

To the east and west of Otley are flooded gravel pits, where sand and gravel have been extracted in the 20th century. The gravel pits to the east at Knotford Nook are a noted birdwatching site. Those to the west are devoted to angling and sailing.

The main roads through the town are the A660 to the south east, which connects Otley to Bramhope, Adel and Leeds city centre, and the A65 to the west, which goes to Ilkley and Skipton. The A6038 heads to Guiseley, Shipley and Bradford, connecting with the A65. To Harrogate, the A659 heads east to the A658, which is the main Bradford–Harrogate road.

Otley bus station is run by West Yorkshire Metro and services are operated by First West Yorkshire, TLC, Utopia and Harrogate Coach Travel. There are local services connecting the town and outlying areas.

Otley railway station opened in 1865 and closed in March 1965; the town bypass follows the line of the old railway. 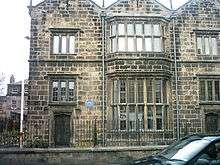 A grammar school was founded by Thomas Cave, who named it "The Grammar School of Prince Henry". It is built in the Elizabethan style and also used as a court-house.[3] Its successor is Prince Henry's Grammar School, Otley, in Farnley Lane.[8]

Otley's first church was built in the early 7th century. In All Saints Parish Church there are the remains of two early Anglo-Saxon crosses, one of which has been reproduced for the town's war memorial. Its church was the centre of an ancient ecclesiastical parish which comprised the chapelries of Baildon, Bramhope, Burley in Wharfedale, Denton, and Farnley, and the townships of Esholt, Hawksworth, Lindley, Menston, Newall with Clifton, Pool-in-Wharfedale, and Little Timble. All Saints Church dates from the 12th century and was built in the Norman style but little of the original remains, except the north doorway.[3][9]

Buried in the graveyard is an ancestor of the 19th century American poet Henry Wadsworth Longfellow, and the grandparents of Thomas Fairfax who commanded Parliament's forces at the Battle of Marston Moor in 1644. In the graveyard of the parish church stands a replica of the entrance to Bramhope Tunnel, a monument to those killed during its construction.

Methodist preacher John Wesley was a frequent visitor to the town in the 18th century. Allegedly his horse died in the town and is buried in the grounds of the parish church. Its grave is marked by an unusual stone, also known locally as the "Donkey Stone". His Journal for 1761 reads, "6 July Monday; In the evening I preached at Otley and afterwards talked with many of the Society. There is reason to believe that ten or twelve of these are filled with the love of God." Wesley Street is named after him. 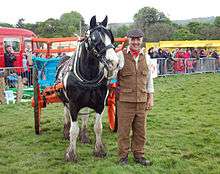 Drama groups include the Otley Community Players, Otley Youth Theatre (OY), and a thriving arts centre in the former courthouse. There is a poetry society, which meets monthly in the Black Horse Hotel. The town has a Brass Band[11] who perform at many events in the town. It is not a regular contesting band, but won first prize in the unregistered section at their first contest at Hardraw Scar in September 2007 and again in 2008. Since then they have competed in the 1st to 3rd section winning Second prize and Best March in 2014.

Otley hosts the annual Otley Folk Festival in September, a Victorian Fayre in December, a carnival in June, and, in May, what is reputed to be the oldest one day agricultural show in the country. This celebrated its bicentenary in 2009. There is a beer festival, organised by the church, in November. 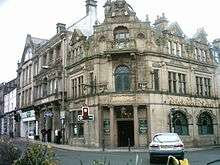 Otley once vied with a handful of towns for the distinction of having the most pubs per head of population in England. This was mentioned in a BBC Radio 4 More or Less programme broadcast in April 2008. The story also featured on the BBC website.[12]

There are 19 pubs in the town although the Roebuck (formerly known as the Spite), the Chevin and the Royalty are on the outskirts, with the Roebuck located in North Yorkshire. The Black Horse Hotel situated in the town centre is historically the largest pub and hotel. The Black Bull in the Market Place, was allegedly drunk dry by Cromwell's troops on the night before the battle of Marston Moor during the English Civil War and has a 15th-century well in the beer garden. The Junction Inn has won numerous awards including a CAMRA award for best pub. There is a working men's club located on Weston Lane north west of the town centre.

In January 2013 The Guardian newspaper featured an article in its Weekend section entitled Let's move to Otley, West Yorkshire.[14]

Otley is "Hotton" in the ITV television soap opera Emmerdale, and appears in ITV's Heartbeat where Otley Courthouse is the old Police Station. ITV's DCI Banks also regularly films in the town. Otley was also the setting for the drama series The Chase and the ITV dramatisation of The Bad Mother's Handbook.

Otley Angling Club was formed in 1897 by local land owners. It controls the fishing on the River Wharfe through Otley and a coarse fishing pond on the outskirts of the town. It runs regular fishing matches on the river and junior matches on the club pond.[15]

Otley Cricket Club, founded in 1820, play in the Airedale and Wharfedale Senior Cricket League. The club has won the league title 13 times and shared it in 1966. The club has three Senior teams and provides facilities for Juniors from Under 9 to Under 17. The Club play at Cross Green.[17] Otley Cycle Club was founded on 27 January 1927.[20] Its patron is Lizzie Armitstead, an international champion cyclist who was born in the town. It meets regularly and hosts a number of races throughout the year.[21]