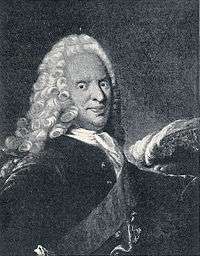 Otto Thott (October 13, 1703 – September 10, 1785), was a Danish Count, minister of state, bibliophile, and collector of books. He was one of the greatest private book collectors of his time in Denmark.

He was the son of Tage Thott (d. 1707), a member of the Danish Privy Council, and Petra Sophie Reedtz. His father died before Otto had reached the age of 4 years, and his mother moved with him to Sorø, where he attended school. He also lost his mother before he was 17 years of age. Thott was left alone almost without any funds. He was supported financially by several aunts and was able to continue his development in the manner that was considered to be necessary for a young nobleman at that time, namely by making a trip abroad.[1]

He lived for a time in Halle, where he studied Jurisprudence, and also history and philosophy. He continued these studies in the University of Jena and later during his stays in Holland, England and France. Additionally, he made the acquaintance of several scientists in the various towns where he stayed, and although his funds were probably limited, he managed to acquire a number of valuable manuscripts and books.

After his return from the trip he obtained, in 1723, a secretary position in the Danish Chancellery, although he was only 20 years old. A significant step forward in his career was made on August 30, 1746, when he came to lead the Finance College as the 1st deputy, a post he held until the December 6, 1759. The year previously he had reached the highest statesmanship dignity on July 21, 1758, to join the "gehejmekonseillet".[2]

Shortly after Frederick V's accession to the throne he had received the Order of the Dannebrog. On September 4, 1747, he received the title of Privy, and in 1752 the Dowager Queen Sophie Magdalene awarded him the order of "de l'union Parfait', and he occupied repeatedly for a long time a position as one of the Copenhagen Bank directors. In 1755-1758 he modernized Gavnø, turning it into a rococo palace.