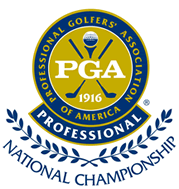 The PGA Professional National Championship is a golf tournament for golf club professionals and teachers who are members of the Professional Golfers' Association of America. It has been held by the PGA of America since 1968, when touring professionals split off to found the PGA Tour.

312 (twice the amount of most PGA Tour events) professionals initially play in the field. At the end of two rounds, the top 90 plus ties compete in round three. After round three, the field is reduced to 70 plus ties. At the end of 72 holes, if there is a tie for 20th place, a playoff occurs until exactly twenty advance to the PGA Championship.

The PGA Championship was originally the leading championship organized by the whole body of professionals, both club and touring. This contrasts to the other three majors, two of which are organized by bodies controlled by golf's amateur establishment, and the other run by a private club founded by a lifetime amateur. Since 1968, the PGA Championship has been run mainly for the top touring professionals, but unlike the other majors, it continues to reserve places for the club pros.

Sam Snead and Bob Rosburg are the only players to win a major championship and the PGA Professional National Championship. Bruce Fleisher and Larry Gilbert each would go on to win a senior major. Several other winners have had PGA Tour careers, either before or after winning the championship.

The winner also earns $75,000 and six exemptions into the PGA Tour for the next season, three of which must be opposite The Open Championship or World Golf Championship events. The top five finishers are also given entry into the second round of the Web.com Tour Qualifying Tournament.

Although the event gives invitations to the men's PGA event, women are eligible to compete. Those who have done so are: Patty Post (1997), Suzy Whaley (2002, 2005), Karen Paolozzi (2014, 2016), and Ashley Grier (2016). Whaley (2005) and Paolozzi made the 36-hole cut. Paolozzi placed inside the top 20 in 2016, but was not given entry due to the "Whaley Rule," where women must play from the same tees as the men during both the sectional and national tournaments. The Women's PGA Championship (formerly the LPGA Championship) was established in 2015 and awarded entry to the top eight finishers of the LPGA T&CP (Teaching and Club Professional) National Championship.