PRS has a reputation as a manufacturer of high end electric guitars made in the US, and they are known for their custom shop instruments.[1] However since the 1990's they have expanded production to Asia, where they manufacture the more affordable 'SE' line of instruments. As of 2013 they have begun making more affordable guitars in the US with their 'S2' line.[2] PRS Guitars also manufactures guitar amplifiers. Two of PRS's most notable endorsers are Carlos Santana and Gustavo Cerati.[3] In addition to this, many other artists endorse the company, including Mike Oldfield, who has used a PRS Artist Custom 24 for studio recordings and live shows since the late 1980s; Clint Lowery; Mikael Åkerfeldt; Paul Allender; Dave Navarro; Ted Nugent; Al Di Meola; Mark Tremonti, Steven Wilson, and Orianthi.[4] 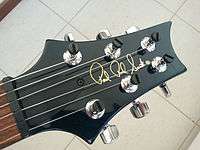 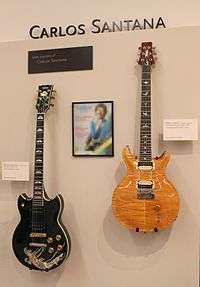 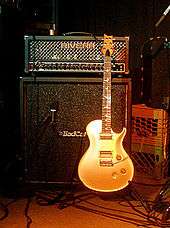 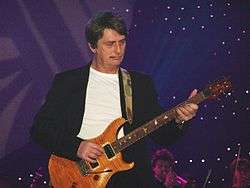 Paul Reed Smith was a guitar player who began building guitars while he was in college in the mid-1970s.[1] Early guitar players to use his hand-built guitars were Stanley Whitaker (of Happy The Man), Derek St. Holmes (of Ted Nugent's band) and Howard Leese (then with Heart), but Smith's big break came when Carlos Santana began playing the still hand-built guitars, which at the time looked like a Gibson Les Paul with a double cut-away and were made of expensive woods like curly maple.[5] He used the custom as a prototype to raise orders on the road worth nearly $300,000. Smith set up a limited partnership with his wife Barbara and business man Warren Esanu, and set up a factory in Virginia Avenue, Annapolis.[6] Smith produced 20 guitars for the 1985 NAMM Show (those guitars are now known as the "NAMM 20"), and managed to find a niche in the guitar market: the mid-1980s was the time of the Superstrat, and there was little competition for the higher-quality, upscale guitars PRS was building, guitars with "an elegant, modern, vintage-inspired design--the kind of guitar one might have expected Fenders and Gibsons to evolve into".[7]

At first there were eight workers taking up one third of the building which they shared with a furniture-stripping shop. After three years PRS had taken over most of the building, with 45 people producing 15 guitars every day, and as time progressed a separate woodshop was added. By 1995 the factory was making 25-30 guitars daily and employed 80 people. In 1996 production moved to a new factory in Stevensville on Kent Island, just across a bridge from Annapolis. By the end of 1998 Prs was producing 700 guitars a month with a staff of 110 people.[6]

The bodies of most PRS guitars are crafted of mahogany, with a maple top on most models. They often feature highly figured tops, including flame maple, quilt maple and figured maple creating the effect of tiger stripes. A small number of bodies feature white Limba, referred to as Korina by luthiers.[8] PRS necks are usually made from mahogany, although some models feature maple or Indian or Brazilian rosewood necks; fingerboards on production models are normally made of rosewood.

A very small percentage of maple trees cut in North America are actually figured. According to their website, to make "10-Top" status, a PRS top must have "clearly defined figure across its entire top with no 'dead' spots".[10] As such, the term "10 Top" refers to specimens of maple with distinctive and notable figure, as opposed to a specific grade of timber.

PRS guitars which feature a "10 Top" feature a written or stamped "10" on the upper right headstock (when viewed from behind). 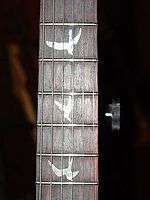 Close-up of the 5th, 7th and 9th fret bird inlays.

Nuts are synthetic and tuners are of PRS's own design, although some models feature Korean-made Kluson-style tuners. PRS guitars feature three original bridge designs: a one-piece pre-intonated stoptail, vibrato, and wrapover tailpiece.The Vibrato was designed with the help of guitar engineer John Mann. It was an update on the classic Fender vibrato and used cam-locking tuners, which offered wide pitch bending with exceptional tuning stability.[6] The pre-intonated stoptail is unique to PRS, however, this design does not allow intonation to be adjusted to compensate for variations in string thickness or drop tuning. The PRS vibrato resembles a vintage Fender Stratocaster unit, and the more recent compensated wrapover tailpiece allows for minimal intonation adjustment. An adjustable wrapover bridge is available as an extra.[11]

Pickups are designed and wound in-house. While most of the pickups are humbuckers, some are actually a pair of single coils wound in opposing directions, one intended for the neck and one for the bridge position. Through the use of a unique rotary pickup selector switch, PRS pickups offer 5 different sounds: a combination of thick humbucking Gibson-like tones, and thinner single-coil Stratocaster-like tones.[6] The standard treble and standard bass pick ups use magnetic pole pieces in the non-adjustable inner coil, and a rear-placed feeder magnet in order to achieve a more authentic single-coil tone when split by the rotary switch[6]

PRS developed pickups for the aggressive rock market, offering pick ups such as the chainsaw, and the Hot-Fat-Screams (HFS) initially used on the Special model.[6] The Vintage Treble and Vintage Bass humbuckers were used on the Classic Electric Model, and a combination of HFS and Vintage bass pick ups were used on the CE maple top models, the Standard, and The Custom models.

In 1998 an electronic upgrade kit was released for pre-1993 instruments which included, lighter weight tuner buttons, nickel-plated brass screws for saddles and intonation, a simulated tone control, and a high capacitance hook up wire.[6] In 2012 PRS released the 408 pickups used on the 408 and Paul's Guitar models. These pickups include innovations that allow no loss of volume when in coil split mode.[12] They have an exclusive agreement to use wire drawn from the same machine that made wire for Les Paul and Stratocaster pickups in the 1950s.[13]

PRS introduced a new, affordable, line of guitars in 2000 [14] referred to as the "SE" which are manufactured in Korea by World Musical Instrument Co. Contrary to popular belief, SE does not stand for student edition. The incorrect assumption was even published in the PRS Book. PRS produce a large range of models in the SE series including the Custom 24, SE245, SE Kestrel & Kingfisher bass guitars as well as signature guitars such as the Bernie Marsden, Tremonti, Zach Myers & Santana amongst others.

In 2013, PRS added the S2 Series, which added a more affordable American PRS that are built in their Maryland factory. The S2 series features proprietary pickups and hardware and a more beveled and flat top, as opposed to the arched top of the Private Stock. Currently the S2 lineup has a Standard 22, 24 and Singlecut, the Custom 22, 24 and 22 Semi-hollow, Singlecut and Singlecut Semi-hollow, Starla, Mira and Mira Semi-hollow. Also in 2015, PRS added the S2 Vela.

In 1992 PRS introduced the Dragon 1 model. Only 50 units were produced. It featured an intricate dragon inlay which ran down the finger board, a wide 22 fret neck, and a non-vibrato Stop-tail bridge and a new pick up design. The changes in design from previous models added a noticeable tonal improvement which led the company to use the same characteristics in later models such as the PRS Custom 22.[6] The Dragon 2 was released in 1993, and the Dragon 3 in 1994. Both featured dragon inlays which became more extreme with every year. Only 100 of each of the 2 models were made.[6] In 1999 PRS released the Dragon 2000, which featured complex body curves, and a 3 dimensional dragon inlay. Just 50 Dragon 2000's were ever produced.[6]

PRS Guitars conduct an hour long factory tour all year long. This tour is free of charge, and covers the electric guitar manufacturing line, amplifier department and the acoustic shop. Tours are limited to groups of eight and are reserved on a first come first serve basis. There is also a museum and the 'West Street East' store where one can buy PRS apparel, parts and accessories. Tours are offered on Tuesdays and Thursdays at 10:00 AM and 1:00 PM EST. The factory is located at their headquarters on Kent Island, Stevensville, MD, United States. The factory also has a store full of their current offerings where one can actually play the guitars. Group tours are also available on request. More details can be found here.[15]

In 2001, PRS released their "Singlecut" guitar, which bore some resemblance to the venerable Les Paul. Gibson Guitar Corporation filed a trademark infringement lawsuit against Paul Reed Smith. An injunction was ordered[16] and PRS ceased manufacturing of the Singlecut at the end of 2004. Federal District Court Judge William J. Haynes, in a 57-page decision ruled "that PRS [Paul Reed Smith] was imitating the Les Paul" and gave the parties ninety days "to complete any discovery on damages or disgorgement of PRS's profits on the sales of its offending Singlecut guitar."[16]

In 2005, the United States Court of Appeals for the Sixth Circuit reversed the lower court decision and ordered the dismissal of Gibson's suit against PRS.[17] The decision also immediately vacated the injunction prohibiting the sale and production of PRS’s Singlecut Guitar. PRS announced that it would immediately resume production of its Singlecut guitars.

Gibson subsequently tried and failed to have the case reheard by all sixteen active Sixth Circuit judges (denied in December 2005)[18] and then by the United States Supreme Court (denied June 2006),[19] which was their last chance to have their original injunction upheld.

While no changes to the design of the Singlecut occurred as a result of the lawsuit (given that Gibson lost), some Singlecut owners and sellers have adopted the term 'pre-lawsuit' to differentiate their Singlecut from others.[20][21][22]