For other uses, see Fingerboard (disambiguation).

The fingerboard (also known as a fretboard on fretted instruments) is an important component of most stringed instruments. It is a thin, long strip of material, usually wood, that is laminated to the front of the neck of an instrument. The strings run over the fingerboard, between the nut and bridge. To play the instrument, a musician presses strings down to the fingerboard to change the vibrating length, changing the pitch. This is called stopping the strings. Depending on the instrument and the style of music, the musician may pluck, strum or bow one or more strings with the hand that is not fretting the notes. On some instruments, notes can be sounded by the fretting hand alone, such as with hammer ons, an electric guitar technique.

The word "fingerboard" in other languages sometimes occurs in musical directions. In particular, the direction sul tasto (Ital., also sulla tastiera, Fr. sur la touche, G. am Griffbrett) for bowed string instruments to play with the bow above the fingerboard. This reduces the prominence of upper harmonics, giving a more ethereal tone.[1]

A fingerboard may be fretted, having raised strips of hard material perpendicular to the strings, which the player presses the strings against to stop the strings. On modern guitars, frets are typically made of metal. Frets let the player stop the string consistently in the same place, which enables the musician to play notes with the correct intonation. As well, frets do not dampen string vibrations as much as fingers alone on an unfretted fingerboard. Frets may be fixed, as on a guitar or mandolin, or movable, as on a lute. Fingerboards may also be unfretted, as they usually are on bowed instruments, where damping by the finger is of little consequence because of the sustained stimulation of the strings by the bow. Unfretted fingerboards allow a musician more control over subtle changes in pitch than fretted boards, but are generally considered harder to master. Fingerboards may also be, though uncommon, a hybrid of these two. Such a construction is seen on the sitar, where arched frets attach at the edges of a smooth fingerboard; unfrettable strings run inside the frets, while frettable ones run outside. The fret arches are sufficiently high that the exterior strings can be fretted without making the finger making contact with the interior strings and Frets may be marked by inlays to make navigating the fingerboard easier.

On six-string guitars and bass guitars, markers are typically single smallish dots on the fingerboard and on its side that indicate the 3rd, 5th, 7th and 9th frets—and the octaves of those positions higher up the neck. A double dot or some other variation marks the 12th fret and 24th frets. Variations on the standard dot shape can make a guitar more distinctive. Position markers are sometimes made luminescent (through using paint, or illuminated with light emitting diodes) to make them more visible on stage. Position markers are also sometimes repeated on the edge of the fingerboard for easy viewing.

Over time, strings wear frets down, which can cause buzzing and deaden the sound. Fixing this occasionally requires replacing the frets—but more often they just need "dressing". In fret dressing, a luthier levels and polishes the frets, and crowns (carefully rounds and shapes) the ends and edges. Stainless steel guitar frets may never need dressing, because of the density of the material.[2] Not having frets carefully and properly aligned with the fingerboard can cause severe intonation issues and constant detuning. The ultimate way of determining the source of a buzz and detuning problem is to measure the levelness of the frets. A straightedge positioned on the neck in the "lie" of one of the strings should show nearly level frets. (There should be a slight relief to compensate for the elliptical shape of the vibrating strings.)

On bowed string instruments, (such as violin, viola, cello, and double bass), the fingerboard is usually made of ebony, rosewood or other hardwood. On some guitars a maple neck and fingerboard are made from one piece of wood. A few modern luthiers have used lightweight, non-wood materials such as carbon-fiber in their fingerboards.[3] 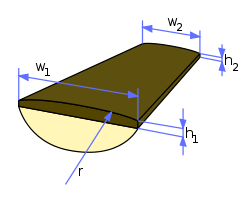 Most bowed string instruments use a visibly curved fingerboard, nut and bridge to provide bow clearance for each individual string.

The length, width, thickness and density of a fingerboard can affect timbre. Most fingerboards can be fully described by these parameters: 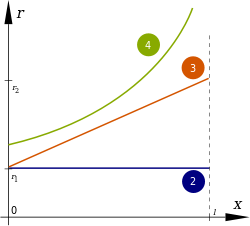 Depending on values of radius r and their transition over the length of the fingerboard, all fingerboards usually fit into one of the following four categories:

For guitars, some players feel that smaller radii (7.25–10") are more comfortable for chord and rhythm playing, while larger radii (12"-16" and up to flat) are better for fast soloing. Conical and compound radius fingerboards try to merge both these features. The nut end of the fingerboard has a smaller radius to ease in forming chords. The bridge end of the fingerboard has a larger radius to make soloing more comfortable and prevent "noting out"[5] ("fretting out"), in which a string comes in contact with a higher fret during bends.

A Brief History Of Discovering The Conical Fingerboard in 1978 by luthier Denny Rauen can be found in American Lutherie #8/Winter 1986 and String Instrument Craftsman May/June 1988 under the title "Multi-Radius Fingerboards". This special radiusing is a standard on many of Denny's custom-built guitars and refret work beginning in 1978. Denny Rauen's articles on the "Multi Radius Fingerboard" are the first published documents on using a conical fingerboard to improve string bending while retaining comfortable chording.

Bowed string instruments usually have curved fingerboards, to allow the player to bow single strings. Those of the modern violin family and the double bass are strongly curved, however those of some archaic bowed instruments are flat. 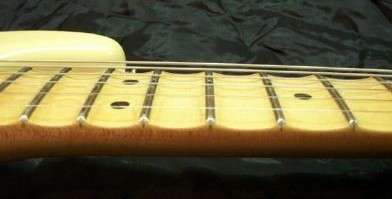 A fretted fingerboard can be scalloped by "scooping out" the wood between each of the frets to create a shallow "U" shape. The result is a playing surface wherein the players' fingers come into contact with the strings only, and do not touch the fingerboard.

The process of "scalloping" a fingerboard well, if done by hand, is tedious work, usually done by careful filing of wood between the frets, and requires a large investment of time. Consequently, it is relatively expensive to have done. Generally, luthiers scallop fingerboards with a special milling machine that has 22 or 24 (according to neck dimensions and number of frets) wood cutting tools. This equipment saves time and adds precision to the process of scalloping the wood in the neck's radius the same in all fret spaces.

In the 1970s, English guitarist John McLaughlin played with Shakti, along with Indian violinist L. Shankar, using an acoustic guitar with a fully scalloped fretboard. McLaughlin explained that this feature increased the ease and range of string bends by eliminating friction between finger and fretboard. The scalloped fretboard also facilitates the rapid, microtonal variation that is important in Indian music, as exemplified by classical Indian Sitar music. Without scallops, the guitarist must play microtones by sliding the string sideways on the fret.

Experimental luthier Yuri Landman made an electric guitar for John Schmersal of Enon called the Twister with a partial scalloped neck for only the thin strings, (like little playground slides).

The "scooped out" nature of scalloped fingerboards creates a number of changes in the way the guitar plays. Most obvious, is that the fingertip only contacts the string, not the fingerboard itself, creating less friction for bends and vibratos, which results in more overall control while playing.

Fretless bowed-string fingerboards are usually scooped lengthwise in a smooth curve, so that if a straight edge is held next to the board parallel to a string, some daylight shows between them, towards the centre of the board. Usually the scoop is slightly greater on the bass side, less on the treble side of the fingerboard. Different string materials or different styles of playing may call for differing amounts of scoop. Nylon or gut strings require the most, and solid steel-core strings the least. A typical full-size (4/4) violin with synthetic-core G, D, and A strings shows 0.75 mm of scoop under the G string, and between 0.5 mm and zero scoop under the E, which is usually a solid steel core on modern instruments.

On guitars, specifically steel-string and electric guitars, the relief (or "dip") is adjustable by altering the tension on the steel truss rod inside the neck. Relaxing the truss rod allows the pull of the strings to increase the dip, and vice versa. Classical guitars do not need truss rods due to the lower tension of nylon strings, but should still exhibit some degree of dip.