Padeshah, Padshah, Padishah or Badishah (Persian: پادشاه‎‎, Turkish: padişah) is a superlative royal title of Persian origin, composed of the Persian pād "master" and the widespread shāh "king", which was adopted by several monarchs claiming the highest rank, roughly equivalent to the ancient Persian notion of "The Great" or "Great King", and later adopted by post-Achaemenid and Christian Emperors. Its Arabized pronunciation as Badshah was used by Mughal emperors. 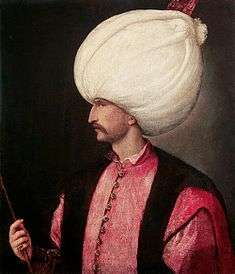 Suleiman the Magnificent, Padishah of the Ottoman Empire. Portrait attributed to Titian c.1530

The paramount prestige of this title, in Islam and even beyond, is clearly apparent from the Ottoman Empire's dealings with the (predominantly Christian) European powers. As the Europeans and the Russians gradually drove the Turks from the Balkans, Central Asia, and the Caucasus, they insisted—even at the cost of delaying the end of hostilities—on the usage of the title "Padishah" for themselves in the Turkish versions of their treaties with the High Porte, as acknowledgement that their Christian emperors were in all diplomatic and corollary capacities the equal of the Turkish ruler, who by his religious paramount office in Islam (Caliph) had a theoretical claim of universal sovereignty (at least among Sunnites).

The compound Pādshah-i-Ghazi ("Victorious Emperor") is only recorded for two individual rulers:

Note that as many titles, the word was also often used as a name, either by nobles with other (in this case always lower) styles, or even by commoners.

There is a large family of Turkish origin using the surname Badi in modern-day Libya. They were originally called "Padishah" due to their Military rank in the Ottoman Army, but the part "shah" was dropped after the Ottoman landing in the North East Libyan town of Misrata, and the pronunciation of "Padi" became "Badi" due to Arabic pronunciation.

In 2008, a professional cricket team, the Lahore Badshahs, was founded.

In India, Padishah is often a Muslim surname, from the above-mentioned trend of adopting titles as names by both royalty and commoners.