For other uses, see Paraphrase (disambiguation). 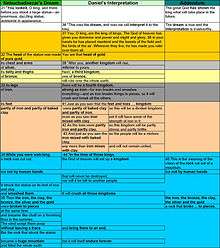 A paraphrase /ˈpærəfreɪz/ is a restatement of the meaning of a text or passage using other words. The term itself is derived via Latin paraphrasis from Greek παράφρασις, meaning "additional manner of expression". The act of paraphrasing is also called "paraphrasis".

A paraphrase does not need to accompany a direct quotation, the paraphrase typically serves to put the source's statement into perspective or to clarify the context in which it appeared. A paraphrase is typically more detailed than a summary. One should add the source at the end of the sentence, for example: When the light was red, trains could not go (Wikipedia).

Paraphrase may attempt to preserve the essential meaning of the material being paraphrased. Thus, the (intentional or otherwise) reinterpretation of a source to infer a meaning that is not explicitly evident in the source itself qualifies as "original research," and not as paraphrase.

The term is applied to the genre of Biblical paraphrases, which were the most widely circulated versions of the Bible available in medieval Europe.[1] Here, the purpose was not to render an exact rendition of the meaning or the complete text, but to present material from the Bible in a version that was theologically orthodox and not subject to heretical interpretation, or, in most cases, to take from the Bible and present to a wide public material that was interesting, entertaining and spiritually meaningful, or, simply to abridge the text.[1]

The phrase "in your own words" is often used within this context to imply that the writer has rewritten the text in their own writing style - how they would have written it if they had created the idea.[2] Nowadays, there are some models to learn and recognize paraphrase on natural language texts.[3]