Patrick Layton Paulsen (July 6, 1927 – April 24, 1997) — known as Pat Paulsen — was an American comedian and satirist notable for his roles on several of the Smothers Brothers TV shows, and for his campaigns for President of the United States in 1968, 1972, 1980, 1988, 1992, and 1996, which had primarily comedic rather than political objectives, although his campaigns generated some protest votes for him.

Paulsen was born in South Bend, Washington, a small fishing town in Pacific County. He was the son of Beulah Inez (née Fadden) and Norman Inge Paulsen, a Norwegian immigrant who worked for the Coast Guard.[1][2] When he was 10, the family moved to California.

After graduating from Tamalpais High School in Mill Valley in May 1945, Paulsen immediately joined the United States Marines. World War II was still being waged at that time, but it ended before he was shipped overseas. However, he did experience overseas duty, including guarding captured Japanese soldiers during their repatriation.[1] He returned home after the war and worked as a posting clerk, a truck driver, a hod carrier, a Fuller Brush salesman, and as a gypsum miner. Later, he was employed as a photostat operator for several years. After attending San Francisco City College, Paulsen joined an acting group called "The Ric-y-tic Players" and formed a comedy trio which included his brother Lorin. 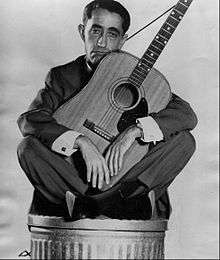 Paulsen went on to become a solo act, appearing as a comedic guitarist in various clubs on the West Coast and in New York City. During one of his appearances in San Francisco, he met the Smothers Brothers.

The Smothers Brothers Comedy Hour premiered in 1967. Paulsen said he was hired because he sold them cheap songs and would run errands. At first he was cast as their editorialist, and his deadpan, double-talk comments on the issues of the day propelled him into the national consciousness. (His deadpan work was nearly flawless: on one isolated occasion, in a talk about Hawaii, he defined a "wahine" as something you put on a bu-hun with lots of mu-hustard. His composure started to crack, but he recovered.) His work on The Smothers Brothers' Comedy Hour earned Paulsen an Emmy in 1968.[3]

In addition to his work with the Smothers Brothers, Paulsen made a memorable guest appearance on The Monkees, appearing in the 1967 episode "Monkees Watch Their Feet," playing the secretary of National Defense, also making many appearances in Rowan & Martin's Laugh-In.

In 1968, Paulsen appeared as timid, tenderfoot Federal Agent Bosley Cranston in "The Night of the Camera," Season 4/Episode 10 of The Wild Wild West. Pat's character had a photographic memory and ended up with the "girl(s)," much to the surprise of agents James West (Robert Conrad) and Jeremy Pike (Charles Aidman).

During the inaugural season of Sesame Street (1969–1970), Paulsen appeared in a series of comical skits: reciting the alphabet, and fumbling on a few of the letters; counting to 10 and to 20, and forgetting a few of the numbers; and talking about the word "full" with a wastebasket full of wastepaper that falls out the bottom of the basket, forcing him to talk about the word "empty" instead.

He was prominently featured in the 1970 Get Smart episode "The Mess of Adrian Listenger."

Early in 1970, Paulsen headlined his own series, Pat Paulsen's Half a Comedy Hour, which ran 13 weeks on ABC. Guests on the first show were former US Vice President Hubert Humphrey, and an animated Daffy Duck, whom Paulsen interviewed.

In 1971, Paulsen performed in the play, Play It Again, Sam at Cherry County Playhouse. He starred in a production every summer, with the exception of 1973, all the way through the 1995 season. He enjoyed this professional summer stock theater so much, that In 1976, he became business partners with television writer and producer Neil Rosen and bought Cherry County Playhouse in Traverse City, Michigan. He ended up starring in 24 different plays, including The Fantasticks, The Odd Couple, Harvey, and The Sunshine Boys. Also, during these later years, he appeared in nightclubs, theaters, and conventions throughout the country.

Paulsen was approached by the Smothers Brothers with the idea of running for President in 1968. His reply, he was later to recount, was, "Why not? I can't dance—besides, the job has a good pension plan and I'll get a lot of money when I retire." The dance crack was a reference to actor/dancer George Murphy, then a U.S. Senator representing California.

Paulsen's campaign in 1968, and in succeeding years, was grounded in comedy, while not bereft of serious commentary. He ran the supposed campaigns using obvious lies, double talk, and tongue-in-cheek attacks on the major candidates, and responded to all criticism with his catchphrase "Picky, picky, picky." His campaign slogan was, "Just a common, ordinary, simple savior of America's destiny." Every question on social issues received basically the same response: "I feel that it is too directly bound to its own anguish to be anything other than a cry of negation, carrying within itself the seeds of its own destruction. However, to get to the meat of the matter, I will come right to the point, and take note of the fact that the heart of the issue in the final analysis escapes me."[4]

Paulsen's name appeared on the ballot in New Hampshire for the Democratic Primary several times. In 1996, he received 921 votes (1%) to finish second to President Bill Clinton (76,754 votes); this was actually ahead of real politicians such as Buffalo mayor James D. Griffin. In 1992 he came in second to George Bush in the North Dakota Republican Primary. In the 1992 Republican Party primaries he received 10,984 votes total.

In the 1980s, Paulsen struck up a relationship with a social worker he met at a Denver comedy club, Linda Chaney. Chaney soon begin serving as Paulsen's booking agent and in 1988 Paulsen and Chaney married. However, Paulsen was notified that she was diverting his funds into her own personal accounts and he filed for divorce after only 40 days. He later sued Chaney and was awarded a judgement of $233,000, to which Chaney said that even if she had the money, she would rather "go out and shred it rather than turn it over" to Paulsen.[5]

In 1995, Paulsen was diagnosed with colon cancer, and in early 1997 it was discovered that it had spread to his brain and lymph nodes.[6] He sought alternative medicine treatment for his cancer in Tijuana, Mexico, and died there from complications of pneumonia and kidney failure on 24 April 1997.[3]