Patrick Joseph Hayes (November 20, 1867 – September 4, 1938) was an American Cardinal of the Roman Catholic Church. He served as Archbishop of New York from 1919 until his death, and was elevated to the cardinalate in 1924.

Patrick Hayes was born in the Five Points section of Manhattan to Daniel Hayes and Mary Gleason.[1] In his own words, Hayes "was born very humble and, I may say, of poor people."[2] Both of his parents were from County Kerry, Ireland, and moved to the United States in 1864.[3] A younger brother, John, was born in 1870. Hayes' mother died in June 1872, and his father later remarried around 1876; a stepsister, Anastasia, was also born that year.[3] At age 15, he was sent to live with his aunt and uncle, who ran a grocery store where Hayes then worked.[3]

After attending La Salle Academy, Hayes studied at Manhattan College, where he excelled at philosophy and the classics and obtained a Bachelor of Arts degree with high honors in 1888.[3] At Manhattan, he also befriended George Mundelein, who would later become Archbishop of Chicago.[4] Hayes then attended St. Joseph's Seminary in Troy.[1]

Hayes was ordained to the priesthood by Archbishop Michael Corrigan on September 8, 1892.[1] He then furthered his studies at the Catholic University of America in Washington, D.C., earning a Licentiate of Sacred Theology in 1894.[3]

Upon his return to New York City, Hayes became an assistant pastor at St. Gabriel's Church on the Lower East Side, where he served under its pastor, John Murphy Farley (whom he would later succeed as Archbishop of New York).[3] Hayes, following Farley's elevation to the episcopacy, served as his private secretary from 1895 to 1903, whence he became chancellor of the Archdiocese and president of the Cathedral College.[3] He was raised to the rank of Domestic Prelate of His Holiness on October 15, 1907.[1]

On July 3, 1914, Hayes was appointed Auxiliary Bishop of New York and Titular Bishop of Thagaste by Pope Pius X.[5] He received his episcopal consecration on the following October 28 from Cardinal Farley, with Bishops Henry Gabriels and Thomas Cusack serving as co-consecrators, at St. Patrick's Cathedral.[5]

Bishop for the Military Services

Hayes was later named Vicar Apostolic of Military, USA, on November 24, 1917.[5] Serving as head of the American military ordinariate during World War I, he recruited hundreds of priests as commissioned officers or chaplains.[3] He was also one of the four episcopal members of the executive committee of the National Catholic War Council.[3]

Following the death of Cardinal Farley in September 1918, Hayes was appointed by Pope Benedict XV the fifth Archbishop of New York on March 10, 1919.[5] He was formally installed as Archbishop on the following March 19.[4] He founded the archdiocesan Catholic Charities in 1920, and subsequently became known as "the Cardinal of Charities."[4] In a 1921 pastoral letter, Hayes strongly condemned abortion, contraception and divorce.[6] He had the first convention of the American Birth Control League raided,[7] and later called its members "prophets of decadence".[8] He welcomed the election of Éamon de Valera as President of the Irish Republic and contributed $1,000 to Sinn Féin.[3]

Pope Pius XI created him Cardinal Priest of Santa Maria in Via in the consistory of March 24, 1924. It was speculated that the Pope delayed his elevation to the Sacred College because a group from St. Patrick's Cathedral had stoned the nearby Union Club for flying a British flag, but Pius nevertheless warmly greeted Hayes at the consistory as "dear little brother".[4][9]

The Cardinal opposed Prohibition, backed legislation to limit indecency on the stage, and endorsed unemployment relief during the Great Depression. Commenting on the Depression in 1931, he stated, "The American people are experiencing a return to religion following a period of carelessness and cynicism marked by the prosperity of the land...Now they are returning when they find they are in need of something greater than the material in facing adversity and stress."[2]

After Rev. Charles Coughlin praised the late Mayor Jimmy Walker in New York, Hayes (who had earlier denounced Walker for his perceived lack of morality) ruled that no ecclesiastical visitor might address a religious gathering without the Cardinal's permission.[10]

He used his Tammany Hall connections to line up Democratic support in Congress for legislation protecting Catholic schools in the Philippines in 1932.[12]

Hayes had a summer house in the Catskills, near St. Joseph's camp maintained by the Amityville Dominican nuns; he once encountered a group of Klansmen there.[4]

Hayes died from a heart attack, caused by coronary thrombosis, in Monticello, at age 70.[13] He was originally interred in a grotto chapel at St. Joseph's camp. When the sisters sold the property he was then interred in the crypt under the altar of St. Patrick's Cathedral.

Cardinal Hayes High School in The Bronx is named after him. 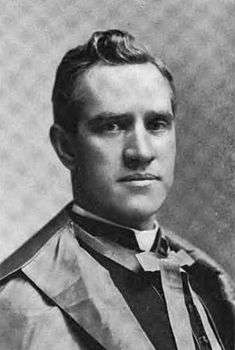 Hayes as the Archdiocesan Chancellor and President of Cathedral College 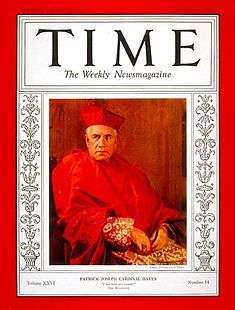