He won 20 games for Cincinnati four times between 1935 and 1940, peaking with a 25–7 season in 1939 as the Reds won the NL pennant for the first time in 20 years. His 161 victories with Cincinnati are the club record for a right-hander, and rank second in franchise history to Eppa Rixey's 179; he also held the team record for career strikeouts when his career ended. His 579 games pitched ranked eighth in NL history when he retired, and his average of 1.88 walks per 9 innings pitched ranked behind only Christy Mathewson (1.59) and Grover Cleveland Alexander (1.65) among pitchers with 3000 innings in the NL since 1900.

Born in Springfield, Kentucky, Derringer made an impressive debut with the St. Louis Cardinals in 1931, winning 18 games for the eventual World Series champions and leading the NL in winning percentage (.692); he had a streak of 33 consecutive scoreless innings in September. He finished third among pitchers in voting for The Sporting News Major League All-Star Team, gaining 56 votes (of a potential 229) and outpolling all other NL pitchers combined.[1] Despite the team's victory, he suffered defeats in Games 1 and 5 of the World Series against the Philadelphia Athletics. He slumped to an 11–14 mark in 1932, and after beginning 1933 at 0–2 he was traded to the Reds in a six-player deal that brought Leo Durocher to the Cardinals. Despite a respectable 3.23 earned run average, he was 7–25 with Cincinnati that season, setting a team record for losses which still stands; his 27 overall losses led the NL, and came within two of Vic Willis' modern NL record, set in 1905. He improved to 15–21 in 1934 before coming into his own the following year. 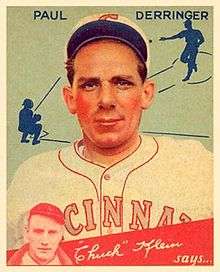 In 1938 he was 21–14, and led the league in innings and complete games, as the Reds finished above .500 for the first time in ten years; he finished second in the NL in strikeouts (132) and third in ERA (2.93). His best season followed for the 1939 league champions as he was among the leaders in wins, ERA, strikeouts, innings and shutouts, and led the league with a .781 winning percentage – a new team record. He finished third in the MVP voting, won by teammate Bucky Walters. But in the World Series against the New York Yankees, he couldn't collect a victory as the Reds were swept; he lost a heartbreaking 2–1 decision in Game 1 when the Yankees scored in the ninth inning, and got no decision in the Reds' 10-inning loss in Game 4 after leaving in the seventh inning with a 3–2 lead.

In 1940 he was 20–12 with a 3.06 ERA and 115 strikeouts, and threw a pair of one-hitters, as Cincinnati repeated as NL champions; he finished fourth in the MVP voting, with first baseman Frank McCormick taking the trophy for the Reds for the third year in a row (Ernie Lombardi had won it in 1938). Derringer finally broke his run of bad breaks in the 1940 World Series against the Detroit Tigers; after losing Game 1 by a 7–2 score, he rebounded with complete game wins in Games 4 and 7. Walters contributed two other victories as the team won its second title, and first since 1919.

In 1958 Derringer was named a founding inductee into the Cincinnati Reds Hall of Fame. He died in Sarasota, Florida at age 81.