Eppa Rixey Jr. (May 3, 1891 – February 28, 1963), nicknamed "Jephtha",[upper-alpha 1] was an American left-handed pitcher who played 21 seasons for the Philadelphia Phillies and Cincinnati Reds in Major League Baseball from 1912 to 1933. Rixey was best known as the National League's leader in career victories for a left-hander with 266 wins until Warren Spahn surpassed his total in 1959.

Rixey attended the University of Virginia where he was a star pitcher. He was discovered by umpire Cy Rigler, who convinced him to sign directly with the Phillies, bypassing minor league baseball entirely. His time with the Phillies was marked by inconsistency. He won 22 games in 1916, but also led the league in losses twice. In 1915, the Phillies played in the World Series, and Rixey lost in his only appearance.[1] After being traded to the Reds prior to the 1921  season, he won 20 or more games in a season three times, including a league-leading 25 in 1922, and posted eight consecutive winning seasons. His skills were declining by the 1929 season, when his record was 10–13 with a 4.16 earned run average. He pitched another four seasons before retiring after the 1933 season.

An intellectual who taught high school Latin during the off-season, earning the nickname "Jephtha" for his southern drawl, Rixey was elected to the Baseball Hall of Fame in 1963 but died a month after his election.

Rixey was born on May 3, 1891 in Culpeper, Virginia, and at the age of ten, his father, a banker, moved his family to Charlottesville, Virginia.[2] His uncles were John Franklin Rixey a former congressman and Presley Marion Rixey the former Surgeon General of the United States Navy.[3] He attended the University of Virginia, where he played basketball and baseball; he was a member of Delta Tau Delta International Fraternity.[4] His brother Bill also played baseball for Virginia.[2][5] During the off-season, umpire Cy Rigler worked as an assistant coach for the University. He recognized Rixey's talent and tried to sign him to the Philadelphia Phillies.[2] Rixey originally declined, saying he wanted to be a chemist, but Rigler insisted, even offering a substantial portion of the bonus he received for signing a player.[2] With his family in financial trouble, Rixey accepted the deal. The National League, upon hearing of the deal, created a rule that prohibits umpires from signing players.[2] Neither Rixey nor Rigler received any signing bonus.[2] 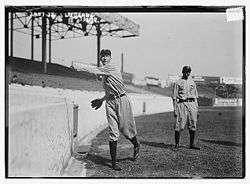 Rixey on the left with Erskine Mayer in the background.

Rixey joined the Phillies for the 1912 season without playing a single game of minor league baseball.[6] His time with the Phillies was marked by inconsistency. He went 10-10 in his first year, with a 2.50 earned run average (ERA) and 10 complete games in 23 games pitched.[7] He had a three hit shutout against the Chicago Cubs on July 18.[8] Rixey was on the losing end of a no-hitter by Jeff Tesreau on September 6.[9] After the season, the Chicago Cubs, under new manager Johnny Evers, offered a "huge sum" to the Phillies for Rixey, but manager Red Dooin declined the offer.[10] Prior to the 1913 season, Rixey notified the Phillies of his desire to finish his studies at the University of Virginia and graduate in June; however, after some negotiation, he decided to sign a contract and re-joined the team shortly after the season began.[11][11] That season, he appeared in 35 games, started 19 of them, winning nine games, and had a 3.12 earned run average. In 1914, his record worsened to 2–11, and his earned run average increased to 4.37.[7] Rixey's record improved to 11–12 in 1915, and his earned run average was 2.39 as the Phillies won the National League pennant and played the Boston Red Sox in the 1915 World Series. During Game 5 of the series, Rixey replaced starter Erskine Mayer for the final six innings of the game. He allowed three runs in the final two innings and lost 5–4.[12]

Rixey went 22–10 in 1916 with a 1.85 ERA and a career high of 134 strikeouts.[7] On June 29, Rixey pitched a four-hit shutout against the New York Giants, facing the minimum 27 batters, because of three double plays, and a player caught stealing.[13] In 1917, despite having a 2.27 earned run average, Rixey led the league in pitching losses with 21.[7] He also handled 108 chances without a single error.[7] Rixey hated losing and was known for destroying the team locker room, or disappearing for days at a time after a loss.[2] He missed the 1918 season to serve in the Chemical Warfare Division of the United States army during the war effort.[2] He struggled upon returning to baseball, going 6–12 with a 3.97 earned run average in 1919, and again leading the league in losses with 22 in 1920.[7] Prior to the 1920 season, rumours circulated that his former manager, Pat Moran, now with the Cincinnati Reds, was interested in trading for Rixey. The relationship between Rixey and manager Gavvy Cravath was never good, and Cravath had made known his desire to trade him; however, he stayed with the Phillies that season, working on his delivery with former pitcher Jesse Tannehill, who, Rixey admitted, helped with his pitching delivery.[14][15] On November 22, 1920, Rixey was traded to the Cincinnati Reds in exchange for Jimmy Ring and Greasy Neale. His record during his eight seasons with the Phillies was 87 wins and 103 losses.[16] 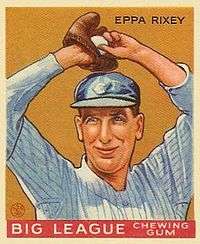 Bubbles Hargrave, former Cincinnati catcher, gave this testimonial: "Eppa was just great. He was great as a pitcher, fielder and competitor. I look on him as the most outstanding player I came in contact with in my entire career."[19]

Rixey's approach to the game is exemplified by the following quote: ""How dumb can the hitters in this league get? I've been doing this for fifteen years. When they're batting with the count two balls and no strikes, or three and one, they're always looking for the fastball and they never get it." – Eppa Rixey (1927)[20]

Originally Rixey had trouble controlling his speed, but eventually became one of the most feared pitchers in baseball according to reporters.[18] Rixey was considered a pitcher with an "peculiar motion", who rarely walked a batter.[17] Throughout his long career, the 210-pound Rixey charmed teammates and fans with his dry wit and big Southern drawl. His nonsensical nickname "Jephtha" seemed to capture his roots and amiable personality.[16] Some writers thought "Jephtha" was a part of Rixey's real name, but it was likely invented by a Philadelphia sportswriter.[16] Rob Neyer called Rixey the fourth best pitcher in Reds history behind Bucky Walters, Paul Derringer and teammate Dolf Luque.[21]

His 266 career victories was the record for most wins by a left-handed pitcher in the National League until Warren Spahn broke it in 1959, however his 251 losses are an all-time record for left-handed pitchers.[2] He also held the longevity record for most seasons pitched by a National League left-hander until Steve Carlton broke it in 1986.[16] As time passed, support for Rixey to be inducted to the Baseball Hall of Fame grew. He was also inducted into the Cincinnati Reds Hall of Fame in 1958.[6][22] In 1960, Rixey finished third in the balloting behind former teammate Edd Roush and Sam Rice (who was later inducted the same year as Rixey).[23] Upon his election to the Hall of Fame on January 27, 1963, he was quoted as saying "They're really scraping the bottom of the barrel, aren't they?"[2]

In 1972 he was inducted into the first class of the Virginia Sports Hall of Fame and Museum.[25]

Rixey's childhood home in Culpeper still stands; it suffered some damage in the 2011 Virginia earthquake.[26]

He was married to Dorothy Meyers of Cincinnati and had two children, Eppa Rixey III and Ann Rixey Sikes and five grandchildren, James Rixey, Eppa Rixey IV, Steve Sikes, Paige Sikes, and David Sikes.[16] After his retirement from baseball, worked for his father-in-law's successful insurance company in Cincinnati, eventually becoming president of the company.[16][27] He died of a heart attack on February 28, 1963, one month after his election to the Hall of Fame, becoming the first player to die between election and induction to the Hall of Fame.[2] He is interred at Greenlawn Cemetery in Milford, Ohio.[7][20]

When Rixey started playing, he was considered an "anomaly". He came from a well-off family and was college-educated, something that was rare during his era. He wrote poetry, and took graduate school classes in chemistry, mathematics and Latin.[2] During the off-season, he was a Latin teacher at Episcopal High School in Alexandria, Virginia.[2] He was also considered among the best golfers among athletes during the time period.[6] He was the subject of hazing in his first few years in the Majors. Eventually he teamed up with other college graduates, Joe Oeschger and Stan Baumgartner and the hazing lessened to a degree.[2]