Messrs. Perkins, Bacon & Co was a printer of books, bank notes and postage stamps, most notable for printing the Penny Black, the world's first adhesive postage stamps, in 1840.

Jacob Perkins was a successful inventor who additionally invented and sold "soft steel" plates for engraving that were hardened after being engraved. The plates were between one and three inches thick, and some weighed fifty pounds. He produced some currency in the USA, and with engraver Gideon Fairman produced the first books to be engraved on steel in the USA. Several eight-page books Perkins and Fairman's Running Hand. They produced currency for Massachusetts, and had won the contract for the new USA National Bank's currency. They were from Boston, Massachusetts.

Jacob Perkins was enticed to come to England by Charles Heath, because of all the world's currency, Perkins' notes were considered the best. He arrived with Gideon Fairman and Asa Spencer and set up shop as Perkins and Fairman in London, and worked exclusively for several months on the attempt to win the Bank of England project. After a few months, Perkins was indebted to the Heaths for a small sum. Perkins and Fairman added Charles Heath as a partner, and moved their shop to 69 Fleet Street. Charles Heath at times owned half the company.

Jacob Perkins, Gideon Fairman, George Heath (financial contribution only), and Charles Heath formed "Perkins, Fairman, and Heath". They produced some books, stamps, one-pound notes for English banks, and currency. The stamps were the first stamps in the world to have adhesive. Jacob Perkins and Charles Heath also had other successful businesses going at the same time.

Perkins and Charles Heath were not as successful with their finances. They did have good accounting of any debts to the company, and shares sold between themselves, and percentage ownership of every project.[1]

There is an overlap of Perkins, Bacon & Petch and Perkins, Bacon and Co; not all business ventures included all partners and percentage ownership is detailed as changing as shares were bought and sold between partners, and money was loaned to partners from the company. Additionally, Charles Heath had many other individual business ventures, as did Perkins. Heath and Perkins had numerous talents and successes, however, they routinely had financial problems. Fortunately, the accounting was very good. Charles Heath had professional relationships with several people that spanned decades. 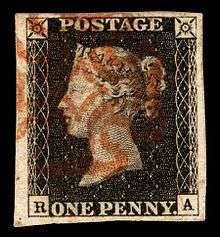 A Penny Black, with a red cancellation that was hard to see and easily removed

England was offering a prize of £20,000 for a note which was impossible to forge. Heath contacted Perkins and convinced him to come to England and Perkins arrived in Liverpool in 1819. They produced samples to Sir Joseph Banks, President of the Royal Commission on Forgery, and it appeared that they would win. They did not. Perkins started showing signs of financial distress and was in minor debt to the Heaths. They did manage to secure smaller contracts for smaller £1 notes, and later won more government contracts, but in the meantime they started publishing.

Financial difficulties of one or the other partners had at least one of them in debt to the company at any moment in time, and the accounting records from these guys are confusing, but very businesslike. Their percentage of profits of any venture changed often.

By 1822 it was known as "Perkins & Heath", then in 1829, after a complicated transaction in which Heath gave up his shares and Joshua Butters Bacon (Perkin's son in law) bought in, as "Perkins & Bacon". Henry Petch joined in 1835, and thus the firm printing the first stamps was actually known as "Perkins, Bacon & Petch". The Penny Black printing plates are currently on display at the British Library. When Petch died in 1852, the firm became just "Perkins, Bacon".

In 1861 they (temporarily) lost the contract to print stamps as a punishment for giving copies of new issues away to friends of the management without permission from the governments involved. Although Heath had won another court battle which gave engravers the right to retain 8 impressions of any engraving, this right did not extend to currency or stamps. 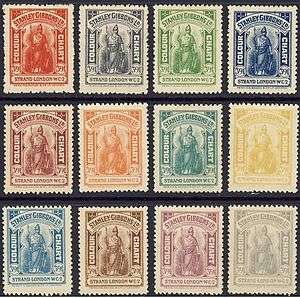 They completed their printing contract for the line-engraved stamps on 31 December 1879, losing subsequent business to competitor De La Rue.

In addition to British stamps, Perkins, Bacon printed for a number of the colonies, including the first stamps of the Cape of Good Hope, which were printed in 1853.

In 1935 the firm went out of business and its records were acquired by Charles and Harry Nissen and Thomas Allen. The records were subsequently acquired by the Royal Philatelic Society London where Percy de Worms organised them for publication and display.[3]