For other uses, see Cape of Good Hope (disambiguation). 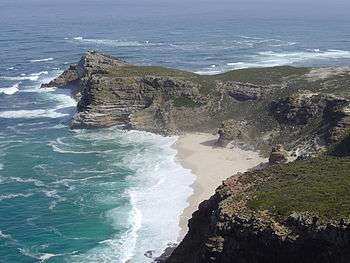 The Cape of Good Hope; looking towards the west, from the coastal cliffs above Cape Point, overlooking Dias beach

There is a misconception that the Cape of Good Hope is the southern tip of Africa, because it was once believed to be the dividing point between the Atlantic and Indian Oceans. In fact, the southernmost point is Cape Agulhas, about 150 kilometres (90 mi) to the east-southeast. The currents of the two oceans meet at the point where the warm-water Agulhas current meets the cold water Benguela current and turns back on itself—a point that fluctuates between Cape Agulhas and Cape Point (about 1.2 kilometers east of the Cape of Good Hope).

When following the western side of the African coastline from the equator, however, the Cape of Good Hope marks the point where a ship begins to travel more eastward than southward. Thus, the first modern rounding of the cape in 1488 by Portuguese explorer Bartolomeu Dias was a milestone in the attempts by the Portuguese to establish direct trade relations with the Far East (although Herodotus mentioned a claim that the Phoenicians had done so far earlier).[2] Dias called the cape Cabo das Tormentas ("Cape of Storms"; Dutch: Stormkaap), which was the original name of the "Cape of Good Hope".[3]

As one of the great capes of the South Atlantic Ocean, the Cape of Good Hope has long been of special significance to sailors, many of whom refer to it simply as "the Cape".[4] It is a waypoint on the clipper route followed by clipper ships to the Far East and Australia, and still followed by several offshore yacht races.

The term Cape of Good Hope is also used in three other ways: 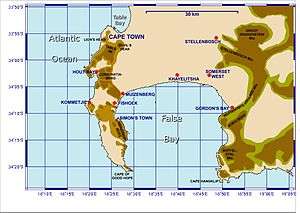 Map showing the Cape Peninsula, illustrating the position of the Cape of Good Hope. The main mountains and their peaks, including Table Mountain, and its relation to the City of Cape Town are shown. 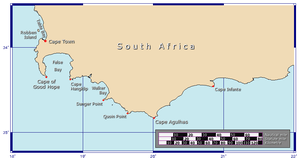 Map of the Cape of Good Hope and Cape Agulhas the southernmost point of Africa.
Main article: Cape Colony 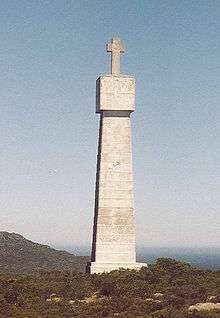 Reproduction of the Cross of Vasco da Gama at the Cape of Good Hope.

The first European to reach the cape was the Portuguese explorer Bartolomeu Dias on 12 March 1478, who named it the "Cape of Storms" (Cabo das Tormentas). It was later renamed by John II of Portugal as "Cape of Good Hope" (Cabo da Boa Esperança) because of the great optimism engendered by the opening of a sea route to India and the East.

The land around the cape was home to the Khoikhoi people when the Dutch first settled there in 1652. The Khoikhoi had arrived in these parts about fifteen hundred years before.[6] They were called Hottentots by the Dutch, a term that has now come to be regarded as pejorative.

Dutch colonial administrator Jan van Riebeeck established a resupply camp for the Dutch East India Company some 50 km north of the cape in Table Bay on 6 April 1652 and this eventually developed into Cape Town. Supplies of fresh food were vital on the long journey around Africa and Cape Town became known as "The Tavern of the Seas".

On 31 December 1687 a community of Huguenots—who are Protestants—arrived at the Cape of Good Hope from the Netherlands. They had escaped to the Netherlands from France in order to flee religious persecution there; examples of these are Pierre Joubert who came from La Motte-d'Aigues for religious reasons. The Dutch East India Company needed skilled farmers at the Cape of Good Hope and the Dutch Government saw opportunities for the Huguenots at the Cape and sent them over. The colony gradually grew over the next 150 years or so until it stretched for hundreds of kilometres to the north and north-east.

When the Dutch Republic, during the Napoleonic Wars, was occupied by the French in 1795, henceforth becoming their vassal and enemy of the British, the United Kingdom invaded and occupied the Cape Colony that same year; relinquished control of the territory in 1803; only to return and reoccupy the Cape on 19 January 1806 following the Battle of Blaauwberg. The territory was ceded to the British in the Anglo-Dutch Treaty of 1814 and was thereafter administered as the Cape Colony. It remained a British colony until being incorporated into the independent Union of South Africa in 1910 (now known as the Republic of South Africa).

The Portuguese government erected two navigational beacons, Dias Cross and Gama Cross, to commemorate Vasco da Gama and Bartolomeu Dias as explorers who as mentioned were the first explorers to reach the cape. When lined up, the crosses point to Whittle Rock (34°14.8′S 18°33.6′E﻿ / ﻿34.2467°S 18.5600°E﻿ / -34.2467; 18.5600), a large, permanently submerged shipping hazard in False Bay. Two other beacons in Simon's Town provide the intersection.

The Cape of Good Hope is at the southern tip of the Cape Peninsula, about 2.3 kilometres (1.4 mi) west and a little south of Cape Point on the south-east corner. Cape Town is about 50 kilometres to the north of the Cape, in Table Bay at the north end of the peninsula. The peninsula forms the western boundary of False Bay. Geologically, the rocks found at the two capes, and indeed over much of the peninsula, are part of the Cape Supergroup, and are formed of the same type of sandstones as Table Mountain itself. Both the Cape of Good Hope and Cape Point offer spectacular scenery; the whole of the southernmost portion of the Cape Peninsula is a wild, rugged, scenic and generally unspoiled national park.

The term the Cape has also been used in a wider sense, to indicate the area of the European colony centred on Cape Town, and the later South African province. Since 1994, it has been broken up into three smaller provinces: the Western Cape, Eastern Cape and Northern Cape; parts of the province were also absorbed into the North West.

Male ostrich at the Cape of Good Hope

With its diverse habitat, ranging from rocky mountain tops to beaches and open sea, the Cape of Good Hope is home to at least 250 species of birds including one of the two mainland colonies of African penguins.

"Bush birds" tend to be rather scarce because of the coarse, scrubby nature of fynbos vegetation. When flowering, however, proteas and ericas attract sunbirds, sugarbirds, and other species in search of nectar. For most of the year, there are more small birds in coastal thicket than in fynbos.

The Cape of Good Hope section of Table Mountain National Park is home to several species of antelope. Bontebok and eland are easily seen, and red hartebeest can be seen in the grazing lawns in Smitswinkel Flats. Grey rhebok are less commonly seen and are scarce, but may be observed along the beach hills at Olifantsbos. Most visitors are unlikely to ever see either Cape grysbok or klipspringer.

The Cape of Good Hope section is home to four Cape mountain zebra. They might be seen by the attentive or lucky visitor, usually in Smitswinkel Flats.

There are a wealth of small animals such as lizards, snakes, tortoises and insects. Small mammals include rock hyrax, four-striped grass mouse, water mongoose, Cape clawless otter and fallow deer.

The area offers excellent vantage points for whale watching. The southern right whale is the species most likely to be seen in False Bay between June and November. Other species are the humpback whale and Bryde's whale. Seals, dusky dolphins and killer whales have also been seen.

The strategic position of the Cape of Good Hope between two major ocean currents, ensures a rich diversity of marine life. There is a difference between the sea life west of Cape Point and that to the east due to the markedly differing sea temperatures.

The South African Marine Living Resources Act is strictly enforced throughout the Table Mountain National Park, and especially in marine protected areas. Disturbance or removal of any marine organisms is strictly prohibited between Schusters Bay and Hoek van Bobbejaan, but is allowed in other areas during season and with relevant permits.

Chacma baboons are widely distributed across southern Africa and are classified as ″least concern" in the IUCN Red List of Threatened Species. However, the South African Parks Department states in its publication Mountains in the Sea that the baboon population on the Cape is "critically endangered." This is due to habitat loss, genetic isolation, and conflicts with humans. Cape baboons have been eliminated from the majority of their range across the Cape Peninsula, and the Cape of Good Hope section of Table Mountain National Park provides a sanctuary for the troops that live within its boundaries. It provides relative safety from nearby towns, where people have killed many baboons after the baboons raid their houses looking for food. Baboons are also frequently injured or killed outside of the park by cars and by electrocution on power lines. Inside the park, some management policies such as allowing barbecues and picnics in the baboon home ranges cause detriment to the troops, as they become embroiled in conflicts with guests to the park.

The Cape of Good Hope is an integral part of the Cape Floristic Kingdom, the smallest but richest of the world's six floral kingdoms. This comprises a treasure trove of 1100 species of indigenous plants, of which a number are endemic (occur naturally nowhere else on earth). The main type of fynbos ("fine bush") vegetation at the Cape of Good Hope is Peninsula Sandstone Fynbos, an endangered vegetation type that is endemic to the Cape Peninsula. Coastal Hangklip Sand Fynbos grows on low-lying alkaline sands and, right by the sea, small patches of Cape Flats Dune Strandveld can be found.[7][8]

Characteristic fynbos plants include proteas, ericas (heath), and restios (reeds). Some of the most striking and well-known members belong to the Proteacae family, of which up to 24 species occur. These include king protea, sugarbush, tree pincushion and golden cone bush (Leucadendron laureolum).

Many popular horticultural plants like pelargoniums, freesias, daisies, lilies and irises also have their origins in fynbos.