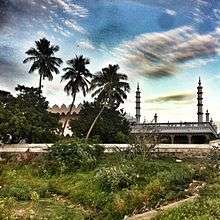 Pettai actually got its name from the Vandi Pettais (Godown with Cart Parking Facilities) built by virudhunagar and sivakasi nadars. These Vandi Pettais were dealing with few agriculture commodities such as coriander, chilli, etc. To understand this fact, still the street adjacent to Sivakasi Nadar Mall is called as Malli (Coriander) Maal Street.

Similar to many towns, Pettai also had a glorious time when the Co-operative Spinning Mill was in operation. People from many towns across Tamilnadu have flocked here for the employment in this mill. Most of the them had settled here.

Though Pettai is situated near the Oxford of South India (Palayamkottai), it also has a numerous educational institutions which serve for a long period.

Apart from this, there are number of private schools serving for the Pettai Public.

Though Pettai can be termed as a diverse population, it has a majority of Muslim population. Following are the mosques in Pettai

Following are the notorious temples in Pettai

Below are the notorious churches

Pettai is famous for evening snacks such as Vadai, Murukku, etc. These eatables were famous because they were fried in the oils produced at traditional Oil Mills here. The place called chekkadi had a lots of chekku (traditional oil mill) operated all the time. It is also famous for Parotta Stalls. Earlier only Pettai Hotels have serves parottas during lunch alongwith Rice.

Quide Millath. On his remembrance, the government hospital in has been renamed. The Cheranmahadevi road flows within Pettai is also named after him as Quaid e Millath Road.

Pettai Bazaar is actually serving as a shopping hub for the nearby villages.

Pettai has a movie theatre called Meenakshi Theatre owned by Meenakshi Chettiar. This theatre is not in operation now.