States and union territories of India

The Constitution of India distributes the sovereign executive and legislative powers exercisable with respect to the territory of any State between the Union and that State.[1] 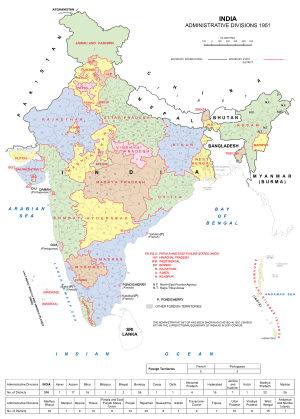 Administrative division of India in 1951

The Indian subcontinent has been ruled by many different ethnic groups throughout its history, each instituting their own policies of administrative division in the region.[2][3][4][5][6][7][8][9][10][11] During the British Raj, the original administrative structure was mostly kept, and India was divided into provinces (also called Presidencies) that were directly governed by the British and princely states which were nominally controlled by a local prince or raja loyal to the British Empire, which held de facto sovereignty (suzerainty) over the princely states.

Between 1947 and 1950, the territories of the princely states were politically integrated into the Indian Union. Most were merged into existing provinces; others were organised into new provinces, such as Rajputana, Himachal Pradesh, Madhya Bharat, and Vindhya Pradesh, made up of multiple princely states; a few, including Mysore, Hyderabad, Bhopal, and Bilaspur, became separate provinces. The new Constitution of India, which came into force on 26 January 1950, made India a sovereign democratic republic. The new republic was also declared to be a "Union of States".[12] The constitution of 1950 distinguished between three main types of states:

The Union Territory of Puducherry was created in 1954 comprising the previous French enclaves of Pondichéry, Karaikal, Yanam and Mahé.[13] Andhra State was created on October 1, 1953 from the Telugu-speaking northern districts of Madras State.[14]

The States Reorganisation Act of 1956 reorganised the states based on linguistic lines resulting in the creation of the new states.[15] As a result of this act, Madras State retained its name with Kanyakumari district added to from Travancore-Cochin. Andhra Pradesh was created with the merger of Andhra State with the Telugu-speaking districts of Hyderabad State in 1956. Kerala was created with the merger of Malabar district and the Kasaragod taluk of South Canara districts of Madras State with Travancore-Cochin. Mysore State was re-organized with the addition of districts of Bellary and South Canara (excluding Kasaragod taluk) and the Kollegal taluk of Coimbatore district from the Madras State, the districts of Belgaum, Bijapur, North Canara and Dharwad from Bombay State, the Kannada-majority districts of Bidar, Raichur and Gulbarga from Hyderabad State and the province of Coorg. The Laccadive Islands which were divided between South Canara and Malabar districts of Madras State were united and organised into the union territory of Lakshadweep.

Bombay State was enlarged by the addition of Saurashtra State and Kutch State, the Marathi-speaking districts of Nagpur Division of Madhya Pradesh and Marathwada region of Hyderabad State. Rajasthan and Punjab gained territories from Ajmer and Patiala and East Punjab States Union respectively and certain territories of Bihar was transferred to West Bengal.

Bombay State was split into the linguistic states of Gujarat and Maharashtra on 1 May 1960 by the Bombay Reorganisation Act.[16] Nagaland was formed on 1 December 1963.[17] The Punjab Reorganisation Act of 1966 resulted in the creation of Haryana on 1 November and the transfer of the northern districts of Punjab to Himachal Pradesh.[18] The act also designated Chandigarh as a union territory and the shared capital of Punjab and Haryana.[19][20]

Madras state was renamed Tamil Nadu in 1968. North-eastern states of Manipur, Meghalaya and Tripura were formed on 21 January 1972.[21] Mysore State was renamed as Karnataka in 1973. On 16 May 1975, Sikkim became the 22nd state of the Indian Union and the state's monarchy was abolished.[22] In 1987, Arunachal Pradesh and Mizoram became states on 20 February, followed by Goa on 30 May, while Goa's northern exclaves of Daman and Diu and Dadra and Nagar Haveli became separate union territories.[23]

In November 2000, three new states were created namely, Chhattisgarh from eastern Madhya Pradesh, Uttaranchal from northwest Uttar Pradesh (renamed Uttarakhand in 2007) and Jharkhand from southern districts of Bihar.[24][25][26][27] Orissa was renamed as Odisha in 2011. Telangana was created on June 2, 2014 as ten former districts of north-western Andhra Pradesh.[28][29]

Main article: List of proposed states and territories of India