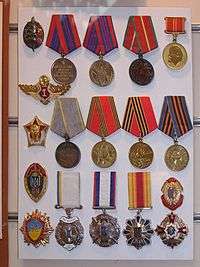 Medals from the History Museum of the Donetsk police

Phaleristics (from the Greek mythological Hero Phaleros via the Latin phalera, heroics; sometimes spelled Faleristics) is an auxiliary science of history which studies military, chivalric, dynastic, fraternal, civil and student orders, awards, medals and decorations and their systems of awards in differing countries (such as the British honours system). The field also studies the medals' accessories, such as ribbon bars, and award certificates. It studies the historical, sociological and art history dimensions. It also defines the study of badges and pins created for civilian usage. The term defines a field of collecting.[1] Although established as a scientific sub-discipline of history, phaleristics usually studies orders and decorations "detached from their bodies".[2]

King George VI of England loved the study of phaleristics, going to the extent of personally overseeing his uniform designs and ribbon placements. He is known to have designed a few British military decorations for the Royal Navy.[3] The Russian phalerist Julius Iversen studied orders and medals in the 19th century .