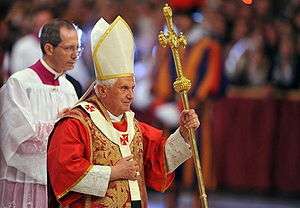 A master of ceremonies, abbreviated M.C., also called compère and announcer, is the official host of a ceremony, a staged event or similar performance.

The term is earliest documented in the Catholic Church since the 5th century, where the Master of Ceremonies was and still is an official of the Papal Court responsible for the proper and smooth conduct of the elegant and elaborate rituals involving the Pope and the sacred liturgy.

The master of ceremonies sometimes also refers to the protocol officer during an official state function, especially in monarchies.

Today, the term often connotes a master of ceremonies who presents performers, speaks to the audience, entertains people, and generally keeps a contemporary event moving. As such, the term occurs in entertainment industry, including for television game show hosts, as well as in contemporary hip hop and electronic dance music culture, where MC's refer to rap artists or performers who perform vocals for their own original material.

In addition, the term also exists in various chivalric orders and fraternal orders.

The term originated in the Catholic Church. The Master of Ceremonies is an official of the Papal Court responsible for the proper and smooth conduct of the elegant and elaborate rituals involving the Pope and the sacred liturgy. He may also be an official involved in the proper conduct of protocols and ceremonials involving the Roman Pontiff, the Papal Court, and other dignitaries and potentates. Examples of official liturgical books prescribing the rules and regulations of liturgical celebrations are Cæremoniale Romanum and Cæremoniale Episcoporum.

The office of the Master of Ceremonies itself is very old. According to the Catholic Encyclopedia, the most ancient ceremonials and rituals of the Catholic Church are the Ordines Romani.[1] Names of Masters of Ceremonies are known since the late Middle Ages (15th century) and the Renaissance (16th century). However, copies of books prescribing the forms of rituals, rites and customs of pontifical ceremonies are known to have been given to Charles Martel in the 8th century. The rules and rituals themselves are known to have been compiled or written by the pontifical masters of ceremonies, dating back to the time of Pope Gelasius I (492–496) with modifications and additions made by Pope Gregory the Great (590–604). It is reasonable to assume that the ceremonials themselves pre-date Gelasius. The duties of the Master of Ceremonies may have developed from the time Emperor Constantine the Great gave the Lateran Palace to the popes (324) or from the time Christianity became the official religion of the Roman Empire (380), and were no doubt influenced by imperial practices, customs and norms. However, documentary evidence from the late Roman period is scarce or lost. The ceremonies and practices of the Byzantine emperors are also known to have influenced the papal court. The accumulation of elaborations and complications since the Renaissance and Baroque eras continued well into the 20th century, until some of the ceremonies (i.e. the court, the rituals and norms) were simplified or completely eliminated by Pope Paul VI in the 1970s after Vatican II; much of the Renaissance pomp and ceremony has been completely abandoned by the popes of the modern era.

At a large Catholic church or cathedral, the Master of Ceremonies organizes and rehearses the proceedings and ritual of each Mass. He may also have responsibility for the physical security of the place of worship during the liturgy. At major festivities such as Christmas and Easter, when the liturgies are long and complex, the Master of Ceremonies plays a vital role in ensuring that everything runs smoothly.

The current papal Master of Ceremonies is Monsignor Guido Marini, who succeeded Archbishop Piero Marini (to whom he is not related).

Masters of Ceremonies at weddings and private events also ensure the coordination of their event, including liaison with catering staff. 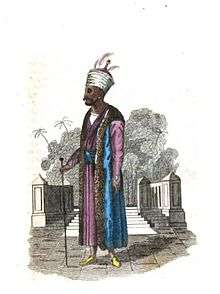 "Master of Ceremonies". from the book Persia by Frederic Shoberl, 1828

The function is prevalent in the culture of chivalric orders, as well as in more modern fraternal orders, such as Freemasons and Odd Fellows.

During the wedding reception, the multifaceted responsibility of the Master of Ceremony (MC) is to keep the agenda flowing smoothly[3] by:

The role of the Wedding Master of Ceremony incorporates a wide range of skills, and those who serve in this capacity have frequently undergone extensive training in the following areas:

In the late 1970s, the term emcee, MC or M.C.[4][5] became an alternative title for a rapper and for their role within hip hop music and culture. The term is often used as a term of distinction, referring to an artist with good performance skills.[6] An MC focuses on skills, lyrical ability, and subject matter. Performers using "MC" in their stage names include:

In the context of a comedy club, the role of MC is traditionally filled by a "compère". In any comedy show, the compère is the host of the evening's events, but the precise role and responsibilities will vary depending on the country, venue and style of event. The compère is usually a working comedian, and whilst they may incorporate elements of their regular set, the role broadly requires a greater level of improvisation – creating a sense of place and community, interacting with the audience, dealing with any hecklers and encouraging them to focus on the other acts. The compère will normally do longer bits at the start of the show and after any interval, and shorter bits between acts. They may also be required to make announcements, such as birthdays, anniversaries and bar promotions.

In the 1940 Disney film, Fantasia, Deems Taylor is the film's Master of Ceremonies.