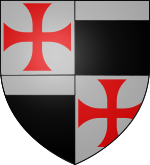 coat of arms of Philip of Milly

Philip of Milly (c. 1120 – April 3, 1171), also known as Philip of Nablus, was a baron in the Kingdom of Jerusalem and the seventh Grand Master of the Knights Templar. He briefly employed the troubadour Peire Bremon lo Tort in the Holy Land.

Philip was the son of Guy of Milly, a knight, probably from Normandy, who participated in the First Crusade, and his wife Stephanie of Flanders. Guy and Stephanie had three sons, all born in the Holy Land, of whom Philip was probably the oldest.[1] He was first mentioned as Guy's son in 1138, and must have become lord of Nablus sometime between that date and 1144, when his name appears with that title. By this time he had also married his wife Isabella.[2]

As lord of Nablus, Philip became one of the most influential barons in the Kingdom of Jerusalem. In 1144, Queen Melisende sent him to relieve the siege of Edessa, but he arrived after the city had already fallen. In 1148, upon the arrival of the Second Crusade, Philip participated in the council held at Acre, where he and the other native barons were overruled and the ill-fated decision to attack on Damascus was made.[3]

Along with the powerful Ibelin family, into which his half-sister Helvis had married, Philip was a supporter of Melisende during her conflict with her son Baldwin III. In the division of the kingdom in 1151, Melisende gained control of the southern part of the kingdom, including Nablus. Despite this arrangement, Philip seems to have been completely loyal to Baldwin, participating in the king's capture of Ascalon in 1153 and the relief of Banyas in 1157. After the victory at Banias, Philip and his troops returned home, and were not present at Nur ad-Din's subsequent ambush of Baldwin at Jacob's Ford.[4]

In July 1161, as Melisende lay dying, Philip exchanged the lordship of Nablus with Baldwin III in order to become lord of Oultrejordain. This allowed Baldwin to regain control of the southern half of the kingdom while his mother was in no condition to oppose him, but he was probably also aiming to strengthen Oultrejordain with a powerful and loyal baron.[5] Baldwin died in 1163 and was succeeded by his brother Amalric, who was a friend of Philip and a fellow supporter of Melisende during the earlier struggle in 1151.[6]

On January 17, 1166 Philip joined the military order of the Knights Templar, for reasons discussed farther below, passing on to them a significant part of his fief including the castle of Ahamant,[7] as it was prohibited by the statutes of the order for members, be it even Grand Masters, to own land individually.[8]

Acting against the decision of the Templars, Philip joined Amalric's invasion of Egypt in 1167. The Ibelin family later recalled an event during the siege of Bilbeis, in which Philip saved the life of Hugh of Ibelin, who had broken his leg when his horse fell in a ditch.[9] The Templars as a whole refused to support Amalric's invasion, and the king blamed them for the failure of the expedition. After the death of their Grand Master Bertrand de Blanchefort in January 1169, Amalric pressured them to elect Philip in his place in August of that year. With the election of Philip, Amalric regained Templar support for the invasion of Egypt, although by the end of the year Amalric was forced to retreat.[10]

For unknown reasons Philip resigned as Grand Master in 1171, and was succeeded by Odo de St Amand. Philip accompanied Amalric to Constantinople as ambassador to the Byzantine Empire in order to restore good relations with them after the failure of the Egyptian invasion. He probably died on April 3, before reaching Constantinople.[11]

Philip's personal life is largely a mystery. William of Tyre describes him as one of the "brave men, valiant in arms and trained from their earliest years in the art of war" who accompanied Amalric to Egypt.,[12] Sometime after he became lord of Oultrejordain, he made a pilgrimage to the monastery of Saint Catherine's Monastery on Mount Sinai.[13] With his wife Isabella he had a son, Rainier (who predeceased him), and two daughters, Helena and Stephanie.[2] Isabella died probably in 1166, which may have led to Philip's decision to take vows as a brother of the Knights Templar.[13] His lands were inherited by his elder daughter, Helena, wife of Walter III of Brisebarre, lord of Beirut, and after Walter's death, by Stephanie and her husbands.[14]