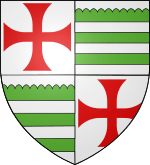 St Amand was born to a family from Limousin, France. He was Marshal of Jerusalem and later Viscount. He was a headstrong leader of the order, which earned him praise and resentment in equal measure. An example of this can be found 1172. When a Templar knight, Gauthier du Maisnil, was accused of murdering an Islamic dignitary by King Amaury I, St. Amand refused to hand him over. He cited the Papal Bull which stipulated the only power over the Templars was Rome.

St. Amand took part in several expeditions during his time as Grand Master. He spearheaded military action in Naplouse, Jericho and Djerach, scoring considerable victories with the Templars. Perhaps his finest hour was at the battle of Montgisard, where his knights convincingly defeated a superior detachment of Saladin's army.

In March 1179, St Amand oversaw the construction of the Chastellet fortress. Its position and impregnability made it a thorn in Saladin's side and he offered considerable amounts of money to have it destroyed. It was so effective that Saladin's May assault on Jerusalem in 1179 was defeated. His forces broke on the fortress's thick walls, and the fierce fighting of the Templars stationed there scored heavy losses on the Muslims. Trying to capitalize on the victory, an assault on the Islamic forces was organized, the Battle of Marj Ayun. It was spearheaded by King Baldwin IV, Raymond III of Tripoli, Odo de St Amand and Roger de Moulins. However, Saladin had regrouped and decimated the Christian forces. Baldwin IV escaped the carnage, taking with him the True Cross, but St. Amand was captured and taken hostage.

In August 1179, the new Templar fortress was captured and the knights stationed there were beheaded by the Muslim forces. St Amand died in one of Saladin's jails sometime during 1180, although no exact date survives. His release was proposed, in exchange for one Saladin's captive nephews, but negotiations came too late.

Not only were St. Amand's victories important from a military standpoint, but they were vital in gaining fresh pledges of money and resources from homeland countries in Europe. Inspired by the Templar's sensational victory at Montgisard, Renaud, Lord of Margat, donated half of the income from several of his cities to the order's cause. [1]