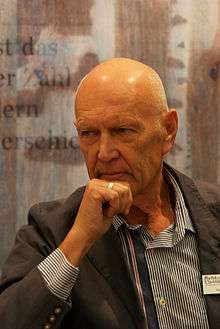 Jean - Pierre Olov Schori (born October 14, 1938 in Norrköping) is a Swedish diplomat and politician. For many years he was international secretary in the Swedish Social Democratic Party and a close assistant to the Swedish prime minister Olof Palme. He assisted Palme in the Socialist International Movement and took part in the struggle against the fascist rule in Greece, Portugal and Spain. In April 2005 he was appointed Special Representative for Côte d'Ivoire by United Nations Secretary General Kofi Annan (UNOCI, succeeded by Choi Young-jin from South Korea in October 2007). He was Secretary General of Sweden's foreign ministry 1982–91, later member of the cabinet 1994–99 and Deputy Foreign Minister responsible for issues of foreign aid and migration, Social Democratic member of the European Parliament, and Sweden's ambassador to the United Nations.

Schori was appointed election supervisor in Zimbabwe 2002 by the European Union. He was also suggested as the United Nations' administrator for Kosovo, but never became one after protests from the United States. They objected to Schori's prior support for Fidel Castro and other socialist regimes. Schori responded by accusing the Bush administration of "McCarthyism" .

Since March 2007 Schori has been General Director of FRIDE, a think-tank based in Madrid.

Schori is sympathetically portrayed as Peter Sorman in the fellow 1968-radical Jan Guillou's Hamilton novels, with a clearly anti-imperialist attitude, at least as critical against the United States as against China or the Soviet Union.