Pink noise or  1⁄f noise is a signal or process with a frequency spectrum such that the power spectral density (energy or power per Hz) is inversely proportional to the frequency of the signal. In pink noise, each octave (halving/doubling in frequency) carries an equal amount of noise energy. The name arises from the pink appearance of visible light with this power spectrum.[1]

where f is frequency and 0 < α < 2, with exponent α usually close to 1. These pink-like noises occur widely in nature and are a source of considerable interest in many fields. The distinction between the noises with α near 1 and those with a broad range of α approximately corresponds to a much more basic distinction. The former (narrow sense) generally come from condensed matter systems in quasi-equilibrium, as discussed below.[2] The latter (broader sense) generally correspond to a wide range of non-equilibrium driven dynamical systems.

The term flicker noise is sometimes used to refer to pink noise, although this is more properly applied only to its occurrence in electronic devices. Mandelbrot and Van Ness proposed the name fractional noise (sometimes since called fractal noise) to emphasize that the exponent of the power spectrum could take non-integer values and be closely related to fractional Brownian motion, but the term is very rarely used. 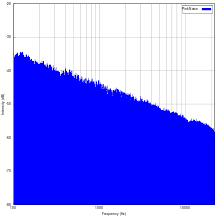 Spectrum of a pink noise approximation on a log-log plot. Power density falls off at 10 dB/decade of frequency. 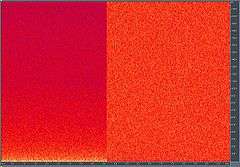 The human auditory system, which processes frequencies in a roughly logarithmic fashion approximated by the Bark scale, does not perceive different frequencies with equal sensitivity; signals around 1–4 kHz sound loudest for a given intensity. However, humans still differentiate between white noise and pink noise with ease.

Graphic equalizers also divide signals into bands logarithmically and report power by octaves; audio engineers put pink noise through a system to test whether it has a flat frequency response in the spectrum of interest. Systems that do not have a flat response can be equalized by creating an inverse filter using a graphic equalizer. Because pink noise has a tendency to occur in natural physical systems it is often useful in audio production. Pink noise can be processed, filtered, and/or effects can be added to produce desired sounds. Pink noise generators are commercially available.

One parameter of noise, the peak versus average energy contents, or crest factor, is important for testing purposes, such as for audio power amplifier and loudspeaker capabilities because the signal power is a direct function of the crest factor. Various crest factors of pink noise can be used in simulations of various levels of dynamic range compression in music signals. On some digital pink noise generators the crest factor can be specified.

Generalization to more than one dimension

In the past quarter century, pink noise has been discovered in the statistical fluctuations of an extraordinarily diverse number of physical and biological systems (Press, 1978;[3] see articles in Handel & Chung, 1993,[4] and references therein). Examples of its occurrence include fluctuations in tide and river heights, quasar light emissions, heart beat, firings of single neurons, and resistivity in solid-state electronics.

An accessible introduction to the significance of pink noise is one given by Martin Gardner (1978) in his Scientific American column "Mathematical Games".[5] In this column, Gardner asked for the sense in which music imitates nature. Sounds in nature are not musical in that they tend to be either too repetitive (bird song, insect noises) or too chaotic (ocean surf, wind in trees, and so forth). The answer to this question was given in a statistical sense by Voss and Clarke (1975, 1978), who showed that pitch and loudness fluctuations in speech and music are pink noises.[6][7] So music is like tides not in terms of how tides sound, but in how tide heights vary.

Because pink noise occurs in many physical, biological and economic systems, some researchers describe it as being ubiquitous.[8] In physical systems, it is present in some meteorological data series, the electromagnetic radiation output of some astronomical bodies, and in almost all electronic devices (referred to as flicker noise). In biological systems, it is present in, for example, heart beat rhythms, neural activity, and the statistics of DNA sequences, as a generalized pattern.[9]

In financial systems, it is often referred to as a long-term memory effect. Also, it describes the statistical structure of many natural images.[10] Recently, pink noise has also been successfully applied to the modeling of mental states in psychology,[11] and used to explain stylistic variations in music from different cultures and historic periods.[12] Richard F. Voss and J. Clarke claim that almost all musical melodies, when each successive note is plotted on a scale of pitches, will tend towards a pink noise spectrum.[13] Similarly, a generally pink distribution pattern has been observed in film shot length by researcher James E. Cutting of Cornell University, in the study of 150 popular movies released from 1935 to 2005.[14]

There are no simple mathematical models to create pink noise. Although self-organised criticality has been able to reproduce pink noise in sandpile models, these do not have a Gaussian distribution or other expected statistical qualities.[18][19] It is usually generated by filtering white noise[20][21][22] or inverse Fourier transform.[23]

There are many theories of the origin of pink noise. Some theories attempt to be universal, while others are applicable to only a certain type of material, such as semiconductors. Universal theories of pink noise remain a matter of current research interest.

A hypothesis (referred to as the Tweedie hypothesis) has been proposed to explain the genesis of pink noise on the basis of a mathematical convergence theorem related to the central limit theorem of statistics.[24] The Tweedie convergence theorem[25] describes the convergence of certain statistical processes towards a family of statistical models known as the Tweedie distributions. These distributions are characterized by a variance to mean power law, that have been variously identified in the ecological literature as Taylor's law[26] and in the physics literature as fluctuation scaling.[27] When this variance to mean power law is demonstrated by the method of expanding enumerative bins this implies the presence of pink noise, and vice versa.[24] Both of these effects can be shown to be the consequence of mathematical convergence such as how certain kinds of data will converge towards the normal distribution under the central limit theorem. This hypothesis also provides for an alternative paradigm to explain power law manifestations that have been attributed to self-organized criticality.[28]

A pioneering researcher in this field was Aldert van der Ziel.[29]

In electronics, white noise will be stronger than pink noise (flicker noise) above some corner frequency. There is no known lower bound to pink noise in electronics. Measurements made down to 10−6 Hz (taking several weeks) have not shown a ceasing of pink-noise behaviour.[30]

A pink noise source is sometimes included on analog synthesizers (although a white noise source is more common), both as a useful audio sound source for further processing, and also as a source of random control voltages for controlling other parts of the synthesizer.

The principal sources of pink noise in electronic devices are almost invariably the slow fluctuations of properties of the condensed-matter materials of the devices. In many cases the specific sources of the fluctuations are known. These include fluctuating configurations of defects in metals, fluctuating occupancies of traps in semiconductors, and fluctuating domain structures in magnetic materials.[2][31] The explanation for the approximately pink spectral form turns out to be relatively trivial, usually coming from a distribution of kinetic activation energies of the fluctuating processes.[32] Since the frequency range of the typical noise experiment (e.g., 1 Hz — 1 kHz) is low compared with typical microscopic "attempt frequencies" (e.g., 1014 Hz), the exponential factors in the Arrhenius equation for the rates are large. Relatively small spreads in the activation energies appearing in these exponents then result in large spreads of characteristic rates. In the simplest toy case, a flat distribution of activation energies gives exactly a pink spectrum, because