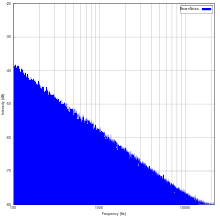 Brownian noise spectrum, with a slope of –20 dB per decade

Sample ), also known as Brown noise or red noise, is the kind of signal noise produced by Brownian motion, hence its alternative name of random walk noise. The term "Brown noise" comes not from the color, but after Robert Brown, the discoverer of Brownian motion. The term "red noise" comes from the "white noise"/"white light" analogy; red noise is strong in longer wavelengths, similar to the red end of the visible spectrum.

The graphic representation of the sound signal mimics a Brownian pattern. Its spectral density is inversely proportional to f², meaning it has more energy at lower frequencies, even more so than pink noise. It decreases in power by 6 dB per octave (20 dB per decade) and, when heard, has a "damped" or "soft" quality compared to white and pink noise. The sound is a low roar resembling a waterfall or heavy rainfall. See also violet noise, which is a 6 dB increase per octave.

Strictly, Brownian motion has a Gaussian probability distribution, but "red noise" could apply to any signal with the 1/f² frequency spectrum.

A Brownian motion, also called a Wiener process, is obtained as the integral of a white noise signal,

meaning that Brownian motion is the integral of the white noise

whose power spectral density is flat[1]

denotes the Fourier transform and

is a constant. An important property of this transform is that the derivative of any distribution transforms as[2]